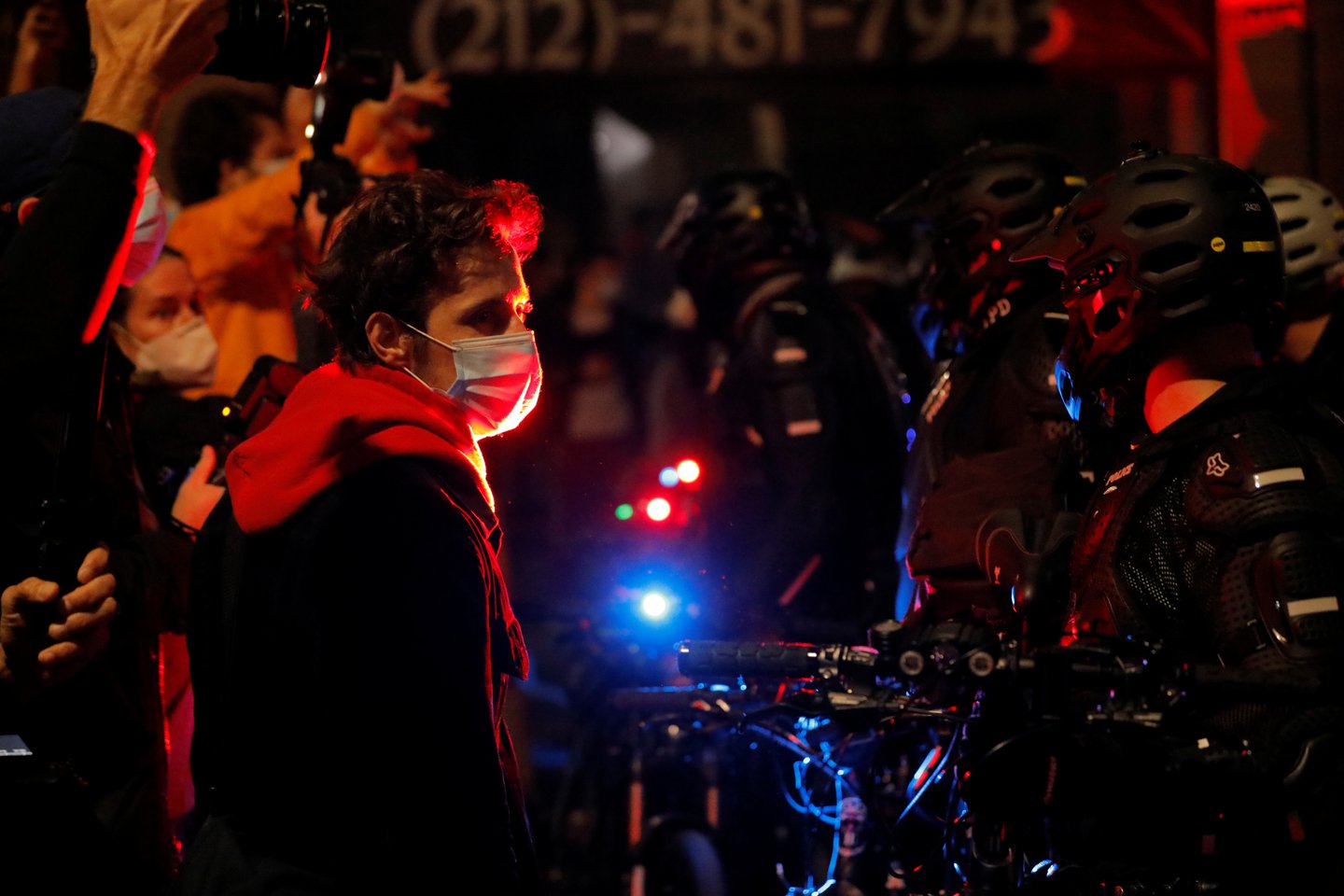 New York Police Department officers use bicycles as a mobile barricade during a Black Lives Matter demonstration in Manhattan on Nov. 5, 2020. At least two journalists were shoved, one of whom was knocked to the ground.

Wall Street Journal reporter Katie Honan was pushed by New York City police who used bicycles as moving barricades to corral journalists as she covered a Nov. 5, 2020, march in Manhattan, according to video and social media posts.

Protests erupted in New York and other cities on Nov. 3, Election Day in the U.S., and continued for days as results for the presidential election trickled in.

Honan covered the demonstration and said in a Twitter post that New York Police Department officers used bicycles to push her and other reporters back, even though they had department-issued credentials.

In a video accompanying Honan’s tweet, police officers wearing full protective gear can be seen repeatedly lifting bicycles in the air as they advanced toward protesters while shouting “Move back!” almost in unison.

Demonstrations were held weekly at the Stonewall throughout the summer, but the Nov. 5 march drew a stepped-up police presence because the results of the presidential election were still uncertain. The rallies were intended to call attention to the rights of Black transgender people.

The NYPD didn’t respond to a request for comment. Officers arrested 18 people in the demonstration, Gothamist reported.

New York City Public Advocate Jumaane Williams was at the scene and also was shoved by officers, according to reports. Williams said in a Twitter post that police were trying to aggressively clear the street to make an arrest.

“Officers then appeared to begin setting up for mass arrests— we intervened to try and de-escalate and prevent that,” Williams tweeted. “Most importantly, there seems to be a lack of leadership when the City needs it the most.”

The NYPD said in a Twitter post around 9 p.m. that night that a suspect attacked a police officer at Broadway and Bond Street in Manhattan’s NoHo neighborhood, a few blocks away from Union Square. The suspect tried to strangle the officer with a chain, police alleged.

Garrison Davis, an independent journalist, said he was pushed by law enforcement officers in separate incidents while covering demonstrations in Portland, Oregon, on Nov. 4, 2020.Davis was documenting two protests in progress; one group was calling for every vote cast in the U.S. presidential election to be counted, while another expressed a combination of dismay with the electoral system and support for the Black Lives Matter movement. Protests had been held in Portland on almost a nightly basis since the …

Documentary filmmaker Lance Bangs was pushed by law enforcement officers while covering demonstrations in Portland, Oregon, on Nov. 4, 2020, according to videos posted on social media.Protests had been held in Portland on almost a nightly basis since the death of George Floyd in Minneapolis on May 25. The U.S. Press Freedom Tracker is documenting assaults, arrests and other incidents involving journalists covering BLM protests across the country.There were two main demonstrations in Portland on Nov. 4, with one group …
More related incidents