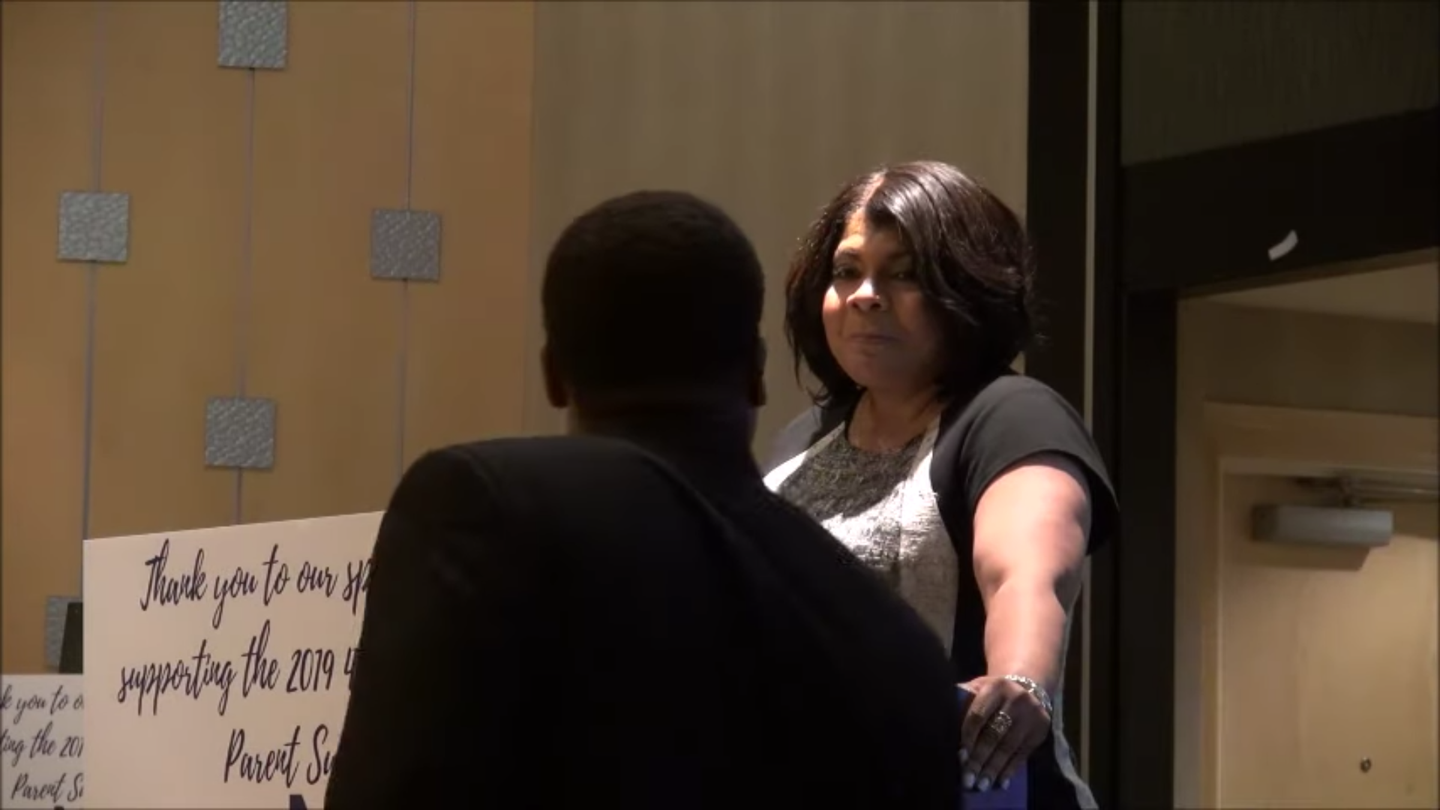 While giving the keynote speech at an event in New Jersey, White House correspondent April Ryan is informed of video recording by a member of her private security (back to the camera). The camera was then confiscated.

Charlie Kratovil, founder and editor of New Brunswick Today, filed a police report alleging assault by a private security guard after being forcibly removed from covering an event on Aug. 3, 2019.

The NBT news team was invited to cover an education summit hosted by the non-profit Project Ready. Kratovil was covering the event on behalf of a reporter who could not, he tweeted, and planned to record the gala ceremonies and post the video to the outlet’s YouTube channel without any editing. Kratovil said he was there for the keynote speech, given by White House correspondent and CNN analyst April Ryan.

Kratovil told the U.S. Press Freedom Tracker that when he checked in and set up his camera at about 6:45 p.m., the public relations officials did not inform him that there would be any limitations or restrictions on filming the proceedings. Kratovil said that he was able to film the first hour and a half of the event without issue.

When Rep. Donald Payne took the stage to introduce Ryan at approximately 8:30 p.m., Kratovil tweeted, he was approached by a man who said he was “with the speaker,” and asked Kratovil to identify himself. He did so and said he had received approval to cover the event. The man left, Kratovil wrote, but returned and threatened to “take down” his camera if Kratovil did not do so himself.

Over the next several minutes, Kratovil debated with the man, later identified as Ryan’s private security guard Joel Morris, and several public relations officials who began to gather around his table, according to his account.

“I maintained a firm position re: video recording, saying I wouldn’t take action until I could get more info on the man who threatened to mess w/ my camera,” Kratovil tweeted. “I told them ‘If he doesn’t give me his name & tell me on the record why I can’t [video], I’m not turning off the camera.’”

In Kratovil’s video, security guard Morris can be seen approaching Ryan onstage, who pauses her speaking, appears to look at Kratovil’s camera and nods. Ryan remains silent as Morris then walks towards Kratovil’s camera, grabs it and walks off.

In the video, which keeps recording, Ryan resumes speaking as Morris grabs the camera and is heard trying to explain the interruption. “When I speak, I don’t have news covering my speech,” Ryan said, adding that she wanted to have an “unfettered conversation with you all.”

However, New Brunswick-based reporter Chuck O’Donnell from TAPInto, a network of local news websites, was allowed to remain in the room.

Kratovil told the Tracker that he quickly gathered up his belongings and followed after Morris.

According to a police report about the incident filed by Kratovil, Morris walked to the front lobby and turned over Kratovil’s camera to the security staff at the hotel’s front desk. The camera was shortly returned to Kratovil.

Kratovil shared with the Tracker a surveillance recording from the lobby that shows Kratovil holding his camera and moving away from Morris. In the video, Kratovil can be heard saying, “This guy is chasing me.” Morris quickly moves around behind him, and appears to grab and twist Kratovil’s left arm behind his back while pushing him out of the frame.

The police report noted the injury.

“According to Kratovil,” Officer Ryan Daughton wrote in the police report, “the privately hired Security Guard utilized some kind of compliance hold and subsequently caused pain to Kratovil’s left wrist. I offered Kratovil medical attention and he refused the same.”

Kratovil told the Tracker that he ended up seeking care at an urgent care a few days after the incident, where they advised him to treat his shoulder injury as a sprain. He said he plans to press charges.

In an Aug. 25, 2019, interview on CNN’s Reliable Sources, April Ryan spoke publicly about the incident. Ryan told host Brian Stelter that no permission had been asked for or granted for filming the event.

Ryan referred to Joel Morris, the private security guard involved in the alleged assault, as her “then-bodyguard” and “former bodyguard,” making it clear in the interview that she had terminated the contract with the security company because Morris “broke protocol by leaving her in the room” during the incident.

Ryan reiterated to Stelter that she receives death threats, and said she assumed Morris was acting out of concern for her safety.

The journalist, Charlie Kratovil, said he attended a Sept. 16 hearing for the assault charges in New Jersey, but that Morris was not in attendance so the matter did not move forward.

Photographer Andrew Mills and NJ Advance Media reporter Stephen Stirling were chased onto a highway and threatened by a man they were covering for a story in Hackettstown, New Jersey.On Feb. 7, 2018, Mills and Stirling visited the neighborhood of funeral director Joseph Fantasia. His company, which contracted with government agencies to transport the dead, had been accused of mishandling bodies for over two years. In June, the Office of the State Medical Examiner severed its ties with Fantasia’s company, …
More related incidents