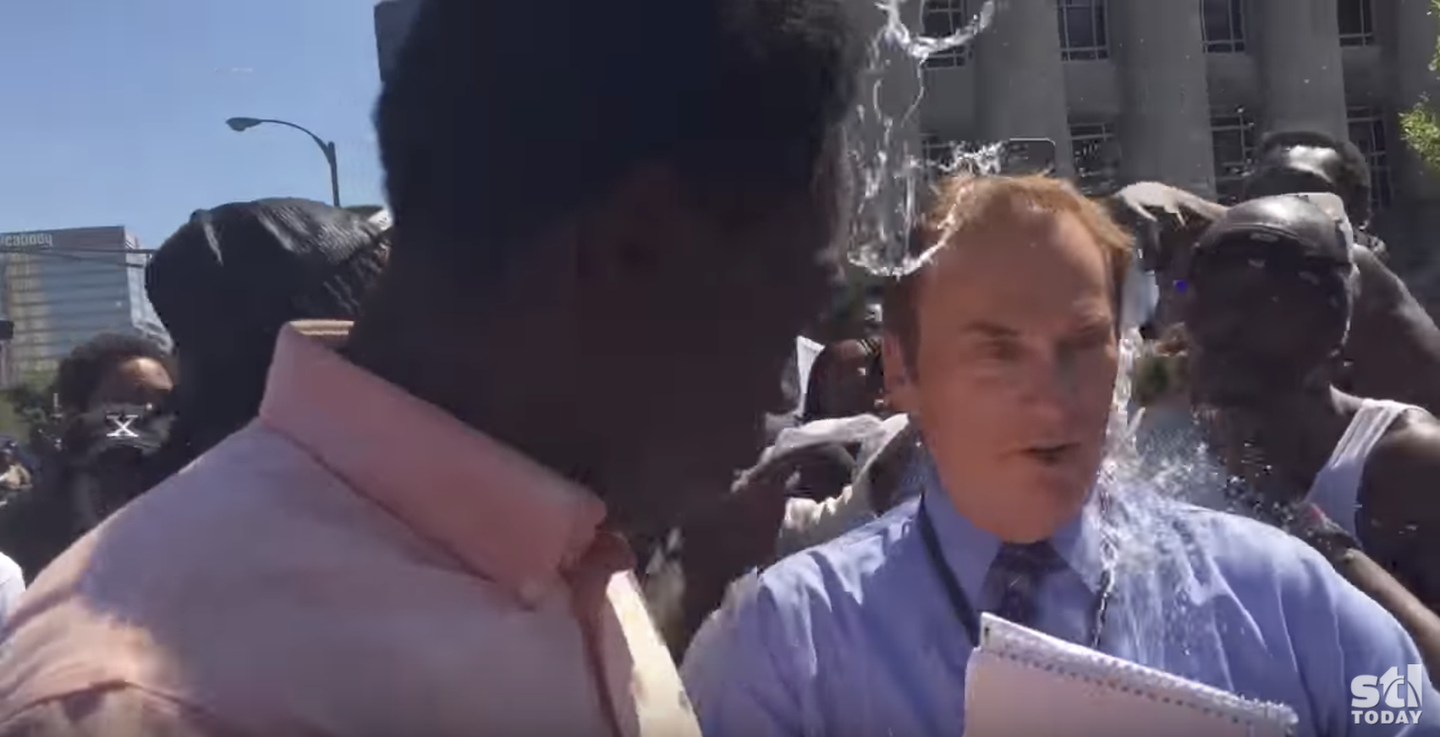 While covering a protest in St. Louis on Sept. 15, 2017, KTVI reporter Dan Gray was hit with water bottles and pressured to leave the area by protesters, he said in an on-air segment on KTVI.

“One agitator in particular had been taunting us for most of the day, and then continued to taunt us, and other people had heard what he was saying,” Gray said on KTVI. “He was complaining about the media, complaining about me in particular. He singled me out for some reason. I guess he knew that I had been in St. Louis a long time because he said, ‘You’ve been reporting on this for 30 years. You’ve been reporting black-on-black crime, black people shooting black people, for 30 years, and didn’t do anything.’ So their anger and frustration turned and focused on us at that point. I became surrounded by a group of people. Some of the folks came to protect us as you can see.”

Gray reported that he was hit by three water bottles, one in the back of the head, and concluded the segment saying, “Again, I understand these people’s frustration. I understand their anger. Perhaps they needed someone to vent it to. Perhaps they needed somebody to go after and criticize. We’re ok. We’re fine. But it just shows how fast things can turn.”

Gray tweeted a video of the event describing it as the “scariest moment in my career.”

A video filmed by St. Louis Post-Dispatch journalist Denise Hollinshed shows a man following Gray and his camerawoman, Tauna Price, as they attempt to leave the protest.

KTVI reporter Dan Gray is followed and threatened by protesters while reporting in St. Louis.

At that point the man steps directly in the path of Gray who steps backward, briefly surrounded by commotion, before he’s pulled forward by the crew filming and several friendly protesters. One protester appears to throw water at him.

As Gray and Price  continue to move up Market Street, the crowd diminishes and Hollinshed asks Gray how he’s doing.

“Shaken,” he says. “I’m shaken and a bit scared as the mob kind of surrounded me and my photographer. We got water thrown at us. We got yelled and shoved and pushed. I understand people’s frustrations with the judge’s decision, but they seem to be taking it out on the news media.. My boss said if there were any confrontation, any threat of violence, we’re leaving. So we’re leaving.”

Scariest moment in my career. Protesters upset about not guilty verdict for an officer accused of killing a suspect, turn on me and media. pic.twitter.com/iZyvg3gX0p