Mike Petchenik, a reporter for Atlanta’s WSB-TV, said a security guard at a local mall tried to grab his phone from his hand and assaulted him as he was reporting at the scene of a shooting on June 13, 2021.

WSB-TV reported that two 15-year-olds had approached a Lenox Square Mall security guard and shot him, before fleeing to a nearby hotel where they were captured and arrested. The security guard was taken to the hospital for wounds to his chest and stomach but was recovering, according to The Atlanta Journal-Constitution.

Petchenik told the U.S. Press Freedom Tracker he was reporting about the incident from off of mall property, but after he walked into the parking lot he saw someone running in his direction out of the corner of his eye.

In a clip Petchenik posted just before 10 p.m., a security guard can be seen walking toward Petchenik and grabbing his phone before the video suddenly stops.

While shooting some video of the crime scene at #LenoxSquare, a security guard grabbed my phone out of my hand. pic.twitter.com/4n6YktaIgR

“You don’t know what we just witnessed out here,” the guard can be heard saying in the clip.

“I was able to wrangle my phone back from her and tell her to get her hands off of me at that point,” Petchenik said. “We were within the view and earshot of police officers but they didn’t really do anything other than tell me that I could stand there.”

Petchenik said he identified himself and was wearing a station polo shirt during the incident, but he wasn’t sure whether he had his press credentials.

In response to a comment on the video, Petchenik wrote on Twitter that he understood the security guard was likely frustrated because of the shooting.

“But grabbing my phone and trying to rough me up wasn’t the proper response,” Petchenik wrote. He told the Tracker he decided not to press charges or file a complaint with the security guard’s superiors. 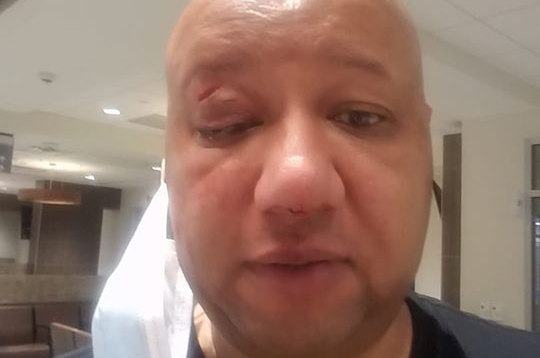 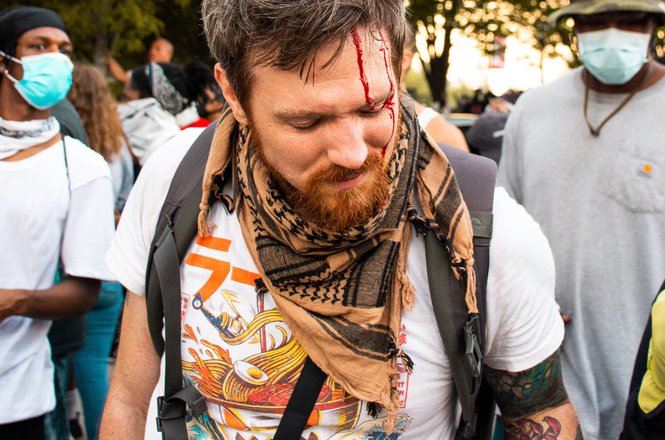 A woman was arrested in Atlanta, Georgia, and charged with kidnapping after police said she hijacked a news van on April 14, 2020, with a reporter inside.Atlanta police spokesperson Officer Anthony Grant told the U.S. Press Freedom Tracker that at approximately 5:30 a.m. police were called to the scene of a crashed Toyota involving a pregnant woman, later identified as 38-year-old Seniqua Lunsford.A CBS46 news crew was nearby to cover the crash, the outlet reported, and had just finished a …

Atlanta-based independent journalist Anissa Matlock was repeatedly pushed by a police officer while reporting during a rally in Stone Mountain, a city in the Atlanta suburbs, on Aug. 15, 2020.Stone Mountain’s nine-story high depiction of Confederate leaders, carved into the mountain that gives the city its name, is considered a shrine for white supremacists. On Aug. 15 several far-right and white supremacist groups arrived in Stone Mountain to protest against a movement calling for removal of the monument.Those groups were …
More related incidents