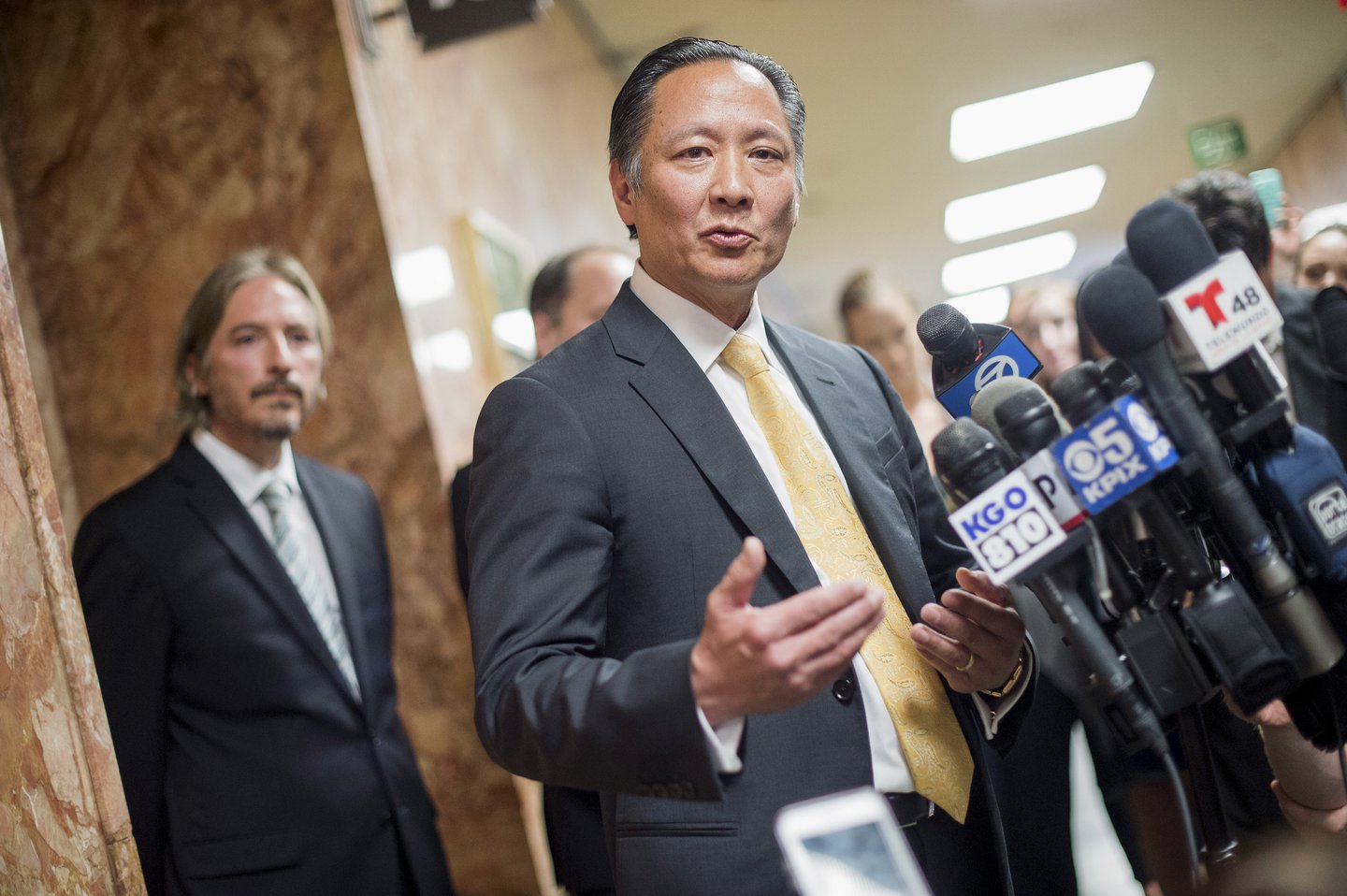 San Francisco Public Defender Jeff Adachi, who died in February, speaks with reporters in this file photo. Police raided the home and office of journalist Bryan Carmody, searching for the source of a confidential police report about Adachi’s death.

On May 10, 2019, San Francisco police officers raided the home and office of freelance journalist Bryan Carmody as part of an investigation into one of Carmody’s confidential sources.

Carmody told the Los Angeles Times that he awoke to 10 or so officers from the San Francisco Police Department banging on his front gate with a sledgehammer. He said he allowed them in after being shown a search warrant signed by a state court judge. The SFPD officers then handcuffed him and searched his house with guns drawn.

Carmody was not formally arrested or charged with any crime, but he was detained for more than five hours. When he was finally released, the SFPD gave him a receipt showing that he had been in police custody from 8:22 a.m. to 1:55 p.m.

While Carmody was in SFPD custody, two FBI agents asked to interview him, but he refused and requested an attorney. An FBI spokeswoman later told the Times that the FBI agents were not involved in the search of Carmody’s house. Technically speaking, Carmody was only raided by the SFPD, not by federal agents.

During the raid on Carmody’s house, the SFPD learned that Carmody also used a separate office space for his independent media company, North Bay News, and quickly obtained a search warrant for the office space, according to the San Francisco Chronicle.

In the end, the officers who searched Carmody’s house ended up seizing multiple notebooks, computers, phones, and cameras, while those who searched his office seized a USB thumb drive, multiple CDs, and a copy of a confidential police report into the death of San Francisco Public Defender Jeff Adachi.

According to the Chronicle, SFPD Captain William Braconi testified during a special hearing in April that the police department had launched both an internal administrative probe and a criminal investigation into the leak.

A few weeks before the May 10 raid, two San Francisco police officers visited Carmody and asked him to identify the source who had leaked him a copy of the police report. Carmody refused. Carmody told the California Globe that when he refused, the officers warned him that if he did not identify his source, then he could be subject to a federal grand jury subpoena.

But Carmody never received a subpoena, either from a federal grand jury or a state prosecutor, which he could have contested in court. Instead, a state court judge secretly authorized the SFPD to raid his house and seize his devices.

David Stevenson, a spokesman for the SFPD, said that the raid on Carmody was part of the SFPD’s criminal investigation.

“The citizens and leaders of the City of San Francisco have demanded a complete and thorough investigation into this leak, and this action represents a step in the process of investigating a potential case of obstruction of justice along with the illegal distribution of confidential police material,” he told the Times.

According to the Times, two judges of the San Francisco Superior Court — Gail Dekreon and Victor Hwang — approved the warrants to search Carmody’s house and office, respectively.

It is not clear who requested the warrants. A spokeswoman for the San Francisco district attorney’s office told the Times that the office was not involved in preparing the warrants.

Thomas Burke, an attorney at Davis Wright & Tremaine who is representing Carmody, said that the raid violated Carmody’s First Amendment rights. He told the Times that the investigators should have issued a subpoena for the records they wanted from Carmody, rather than raiding his newsroom and seizing documents unrelated to the investigation.

“So much information has nothing to do with the purpose of their investigation,” he said. “If you are looking for one piece of information, that’s why you issue a subpoena.”

Following a hearing in the case, a San Francisco police attorney said equipment seized from independent journalist Bryan Carmody during a raid at his home on May 10, 2019, can now be collected, according to the San Francisco Chronicle.

The Chronicle also reported that San Francisco Superior Court Judge Samuel Feng did not hear any motions in the case, including to quash and unseal warrants used in the raid, and to return the equipment.

In a tweet following the hearing, Carmody said he was pleased the items would be returned.

Three San Francisco superior court judges all ruled on Aug. 2, 2019, that warrants to search the home, phone and office of Bryan Carmody were invalid because of his career as a journalist, the San Francisco Examiner reported.

Judge Gail Dekreon, ruling on the home search warrant, also said at the hearing that she was not told Carmody had a current San Francisco press pass, according to the Examiner.

A total of five search warrants were obtained as part of the investigation into Carmody’s confidential sources. Two of those warrants culminated in an early-morning raid on May 10 of the freelance journalist’s home and office. One phone records warrant, dated March 1, was previously quashed in July by San Francisco County Superior Court Judge Rochelle East.

A hearing for the fifth and final warrant, also for Carmody’s phone records, is scheduled for Aug. 16.

The most recent rulings nullify the warrants in question and unseals their contents, according to the San Francisco Chronicle, making any evidence collected unusable by investigators.

Here are the two of the 3 orders quashing warrants today. One of the warrants was for my office and another for my phone. Another order quashing the warrant for my home will be released by the court on Monday. https://t.co/ItzStQGSOchttps://t.co/TS7PnK2fkz

The city of San Francisco has agreed to pay $369,000 as part of a settlement after police raided the home and office and detained independent journalist Bryan Carmody in May 2019.

The San Francisco Chronicle reported that the settlement claim goes to the city’s Board of Supervisors for approval on March 3, 2020, and then to the full board for another vote.

The San Francisco Police Department had obtained five search warrants — three separate ones for his cell phone records and one each for the raid of his home and office — in its attempt to find the journalist’s source of a leaked police report. All five warrants were later deemed illegal, rendering any information from the raid or phone records unusable.

Unsealed applications for the warrants show police did not inform judges that Carmody had a valid press pass issued by the police department, Courthouse News reported.

The First Amendment Coalition funded a legal team to unseal the warrants, and its executive director told the Chronicle that it was only proper for the city to compensate Carmody after what happened. “It is heartening to see that Bryan is going to receive some recompense for this outrageous violation of his rights,” David Snyder said.

At least two other lawsuits from the raid are still pending, and the city’s Department of Police Accountability also has an ongoing investigation into the Carmody warrants, according to Courthouse News.

The San Francisco Police Department has acknowledged the need to uphold press protections after police raided the home and office and detained independent journalist Bryan Carmody in May 2019.

The Associated Press reported that the city’s Board of Supervisors unanimously approved a $369,000 settlement with Carmody in March, deeming the raids “a shameful moment for the city.”

As part of the settlement, SFPD agreed to send a “department bulletin” advising officers of journalist protections with regards to police searches and subpoenas. San Francisco News reported that the city and police department have also approved revisions to departmental orders and new training measures to ensure such violations do not happen moving forward.

Ben Berkowitz, one of Carmody’s attorneys, told the AP, “The city’s agreement to these terms means that all law enforcement employees are to be properly trained on California’s Shield Law and the procedures necessary to protect the rights of a free press to report on government actions without fear of unconstitutional surveillance or interference.” 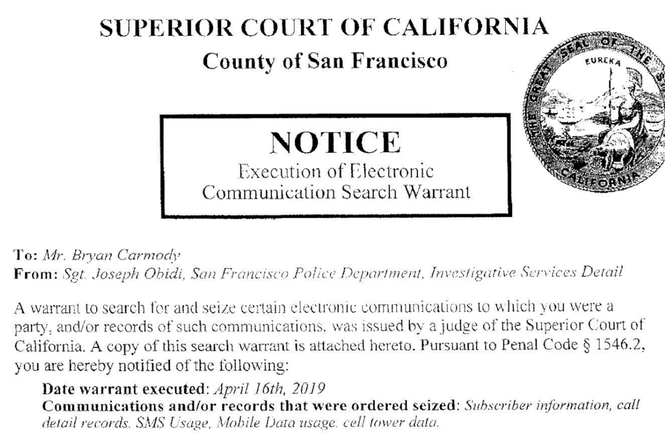 In March and April 2019, San Francisco police seized phone records for freelance journalist Bryan Carmody as part of an … 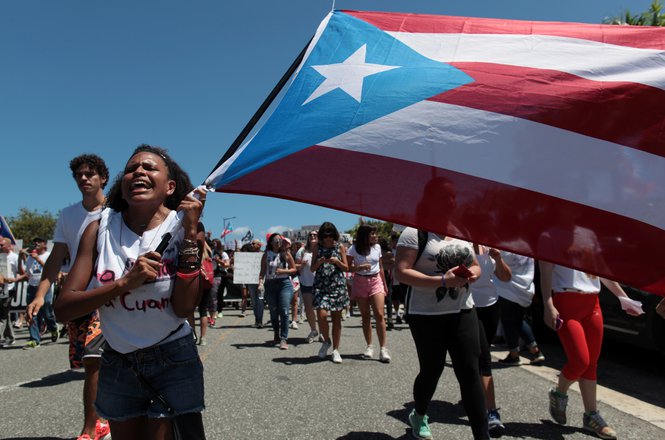 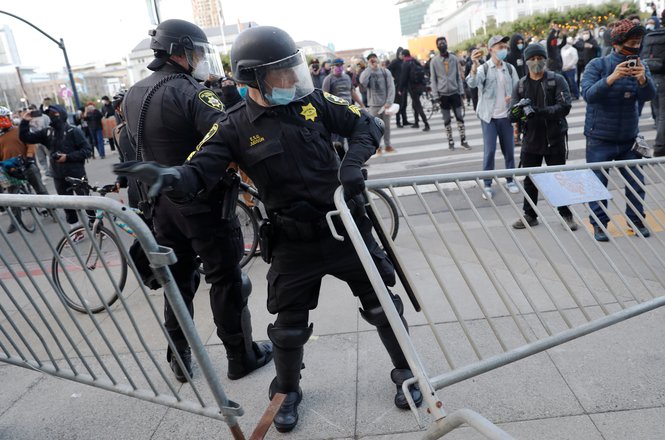 Leonardo Castañeda, reporter for The (San Jose) Mercury News and East Bay Times, was briefly detained by local police while …

Freelance photojournalist Jeremy Portje was arrested and charged with two misdemeanors and a felony while documenting a homeless encampment in Sausalito, California, on Nov. 30, 2021, according to an officer from the Sausalito Police Department.Portje was filming for a documentary about homelessness in Marin County, according to the Pacific Sun, a weekly newspaper in the county. A witness identified as a volunteer at the encampment told the Pacific Sun that an officer was following Portje and deliberately stood in front …
More related incidents