Three journalists from The Lantern, the Ohio State University student newspaper, were pepper sprayed and threatened with arrest by police officers while covering protests in Columbus, Ohio, on June 1, 2020. The three students clearly and repeatedly identified themselves as members of the media before the assault, according to interviews with the journalists and video footage of the incident.

The protests were held in response to a video showing a white police officer kneeling on the neck of George Floyd, a Black man, during an arrest in Minneapolis, Minnesota, on May 25. Floyd was pronounced dead at a local hospital. Protests against police violence and in support of the Black Lives Matter movement have been held across the U.S. since the end of May.

On the night of June 1, Lantern editors Sarah Szilagy, Max Garrison and Maeve Walsh were covering peaceful protests that had moved from the Ohio Statehouse in downtown Columbus toward the Ohio State University campus. About 20 minutes after a 10 p.m. curfew went into effect, the protesters reached the intersection of North High Street and Lane Avenue on the edge of campus.

Up until this point, the journalists had not noticed a police presence. A few minutes after reaching the intersection, however, police cars suddenly arrived and stopped behind the protesters, Walsh and Garrison told the U.S. Press Freedom Tracker. Szilagy, the Lantern’s campus editor, did not respond to emailed requests for comment.

Police officers got out of their cars, walked swiftly through the crowd, and began using pepper spray to disperse the protesters, they said. The three journalists, who were standing behind a concrete barrier on the sidewalk, somewhat removed from the protesters in the street, remained on the scene as the protesters left, Walsh and Garrison told the Tracker.

The journalists were then approached from multiple directions by officers ordering them to “go home” because of the curfew, according to an account of the incident Garrison wrote for The Lantern. They continued to film and identify themselves as press, holding their press passes in the air, Walsh said. The officers responded that they “don’t care” and threatened to arrest the journalists if they didn’t disperse.

Another group of officers approached and “got very close to us,” according to Garrison, forcing them to step back. Garrison said one officer pushed him. Another shot pepper spray at the group from point-blank range, hitting him on the arm and Szilagy in the eyes, Garrison said. Walsh was not directly hit, but said the gas made her cough.

In a video of the incident The Lantern posted to Twitter, the journalists are pepper sprayed after repeatedly identifying as media who are “exempt from curfew.”

Adam Cairns, a staff photographer with the Columbus Dispatch, witnessed the attack. Cairns told the Tracker that he had been standing near the edge of the intersection with the student journalists, but turned to walk away before another officer came around the corner and shot pepper spray at the journalists. “[I] will attest that they were screaming at the cops that they were media,” Cairns posted to Twitter. “Police, despite clearly seeing press credentials, did not care. I crossed Lane at that point and missed the pepper spray.”

Here is a photo of @TheLantern journalists showing their press IDs to police moments before being pepper sprayed pic.twitter.com/Mvr4TLT83F

The three journalists turned to flee but were followed by an officer who fired pepper spray at their backs before they turned into an alley, according to Garrison. They then sought refuge nearby at the house of their editor, Sam Raudins, where they spent several hours recovering. None of them returned to the protests that night. “They basically just censored us,” Szilagy told The Washington Post, “and made us incapable of covering other things that happened that night.”

In the hours following the attack, Raudins sent an email to the Columbus Division of Police reporting the incident. “This was not our team getting caught in the crossfire; this was a direct interaction between CPD and The Lantern,” she wrote in the letter posted to Twitter.

Our editor-in-chief @sam_raudins emailed @ColumbusPolice, reporting how officers threatened to arrest and then pepper-sprayed our reporters after our reporters identified themselves as members of the news media. #columbusprotest pic.twitter.com/UXaSYC9bVQ

In a press conference the following day, Columbus Police Chief Thomas Quinlan was asked about the police officers’ treatment of journalists.

“There’s no malice involved, there’s no intent, it’s just a very chaotic situation,” Quinlan said. “And in that regard, I’d ask the public to have some patience and please comply, and we’ll work it out afterward. But please don’t stand there and argue; move along and comply and we’ll fix this after the fact so nothing bad happens.”

Quinlan also said, “we are dealing with imperfect human beings in imperfect situations. Mistakes will happen and we will take action to correct them and make sure that we do not allow our mistakes to be repeated.”

When asked specifically about the incident involving the Ohio State student journalists, Quinlan said the reporters were not easily recognizable as news media, but the department had launched an internal affairs investigation of the officers, the Dispatch reported.

“We are aware of the incident in question and it is currently under investigation per our use of force policy,” Sergeant James Fuqua, public information officer, said in response to the Tracker’s request for a status update.

The Columbus Division of Police did not respond to the Tracker’s request for comment.

Three journalists from The Lantern, the Ohio State University student newspaper, were pepper sprayed and threatened with arrest by police officers while covering protests in Columbus, Ohio, on June 1, 2020. The three students clearly and repeatedly identified themselves as members of the media before the assault, according to interviews with the journalists and video footage of the incident. The protests were held in response to a video showing a white police officer kneeling on the neck of George Floyd, …

Three journalists from The Lantern, the Ohio State University student newspaper, were pepper sprayed and threatened with arrest by police officers while covering protests in Columbus, Ohio, on June 1, 2020. The three students clearly and repeatedly identified themselves as members of the media before the assault, according to interviews with the journalists and video footage of the incident. The protests were held in response to a video showing a white police officer kneeling on the neck of George Floyd, … 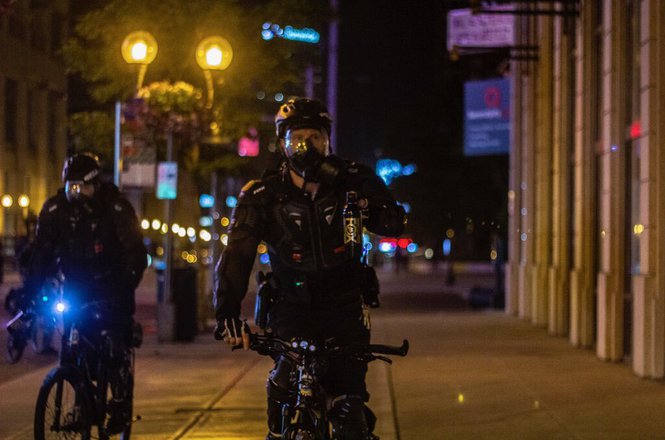