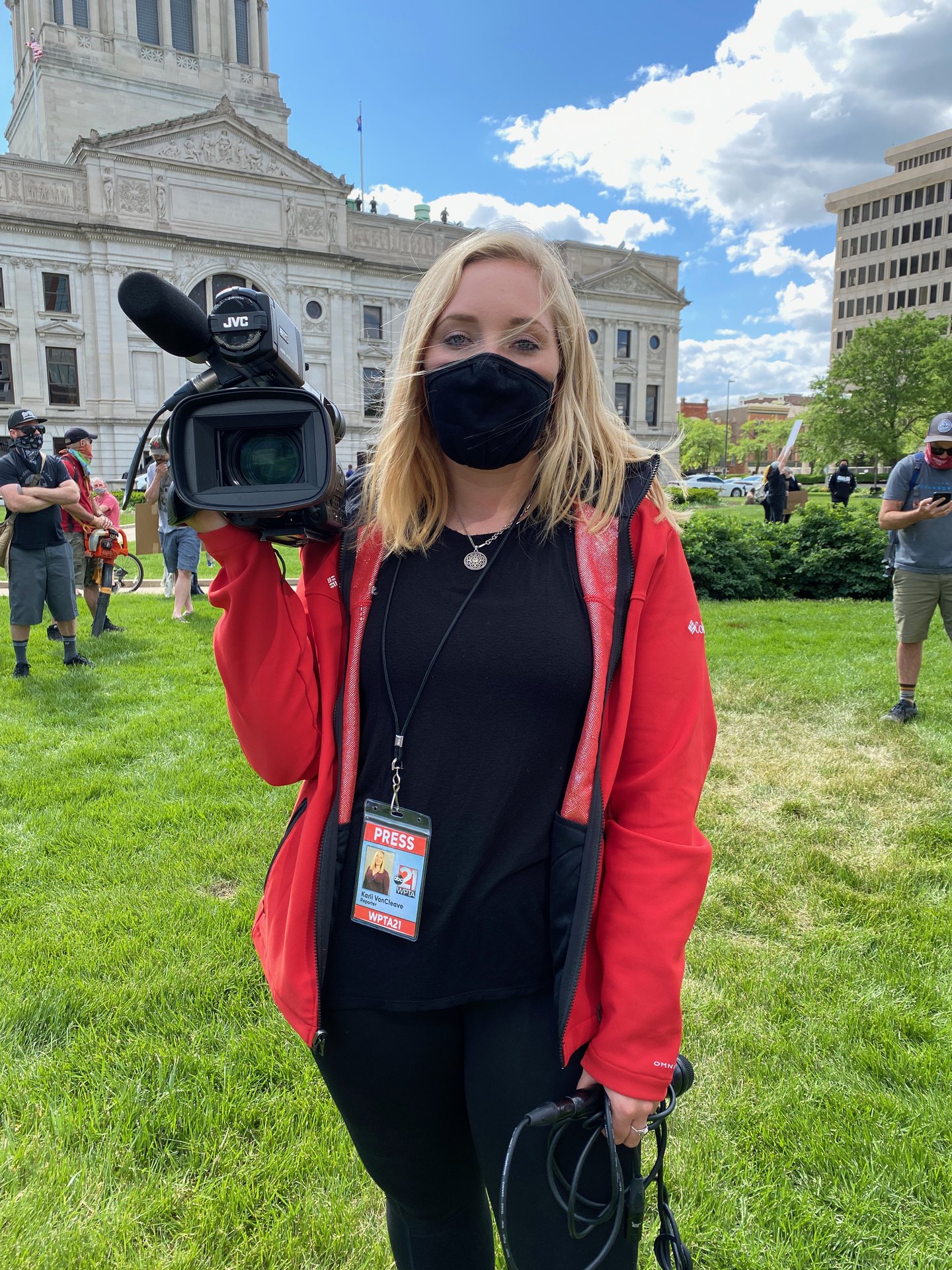 Karli VanCleave, a journalist with WPTA ABC 21, was struck by a tear gas canister fired by police while she was covering protests in Fort Wayne, Indiana, on May 29, 2020.

Protests in Fort Wayne began as demonstrations erupted across the country, sparked by a video of a white police officer kneeling on the neck of George Floyd, a black man, during an arrest in Minnesota on May 25. Floyd was pronounced dead at a hospital.

VanCleave was part of a group of five journalists with WPTA covering the protests. They had been standing near the police, who were aware the journalists were there, she said. VanCleave and her colleagues were wearing bright red shirts and jackets with the station’s logo. She was carrying equipment, including a camera marked with ABC 21’s letters.

As protesters and police faced off, without a warning, police began shooting canisters off in every direction, VanCleave said. She began to run and lost the rest of her team.

She saw one of the canisters, billowing smoke and looking “like a firework,” coming straight toward her face. VanCleave said she turned to duck, and the canister hit her in the back. She couldn’t breathe and had to hunch over. She was also carrying a large camera and a microphone, which made it “impossible” to run, she said.

VanCleave’s coworker, Kayla Crandall, posted on Twitter that VanCleave had been struck with a canister while covering the protest.

The blow from the canister left VanCleave feeling sore the next day. Being close to the tear gas was worse, she said, because she couldn’t breathe or see and her skin felt as though it was burning everywhere.

VanCleave did not report the incident to police. Though the news organization has been in touch with police about other issues from the protests, she did not believe her experience had been reported.

Sergeant Brian Walker, the regional public information officer for the Indiana State Police, said in an email that he had looked into the claim, but there was nothing to comment on and confirmed there was no documentation of it.

VanCleave said police did not give warnings before using tear gas. For both protesters and the press, it was not clear what people were supposed to do to avoid exposure. “We would inch closer and closer so we could get the best shots, and still thinking that we were OK for a little bit to not get tear-gassed,” VanCleave said. “But then it would just happen out of nowhere, it seemed like almost every time.”

The U.S. Press Freedom Tracker is documenting damage of equipment and multiple journalists arrested or struck by crowd control ammunition or tear gas while covering related protests across the country. Find these cases here.

Indianapolis Star photojournalist Kelly Wilkinson was tear gassed, pepper sprayed, threatened and shot with a pepper ball on May 29, 2020, while documenting the first night of protests in Indianapolis, Indiana.The protests were sparked by a video showing a police officer kneeling on the neck of George Floyd, a Black man, during an arrest in Minneapolis, Minnesota on May 25. Floyd was later pronounced dead at a local hospital. Protests against police brutality and in support of the Black Lives …