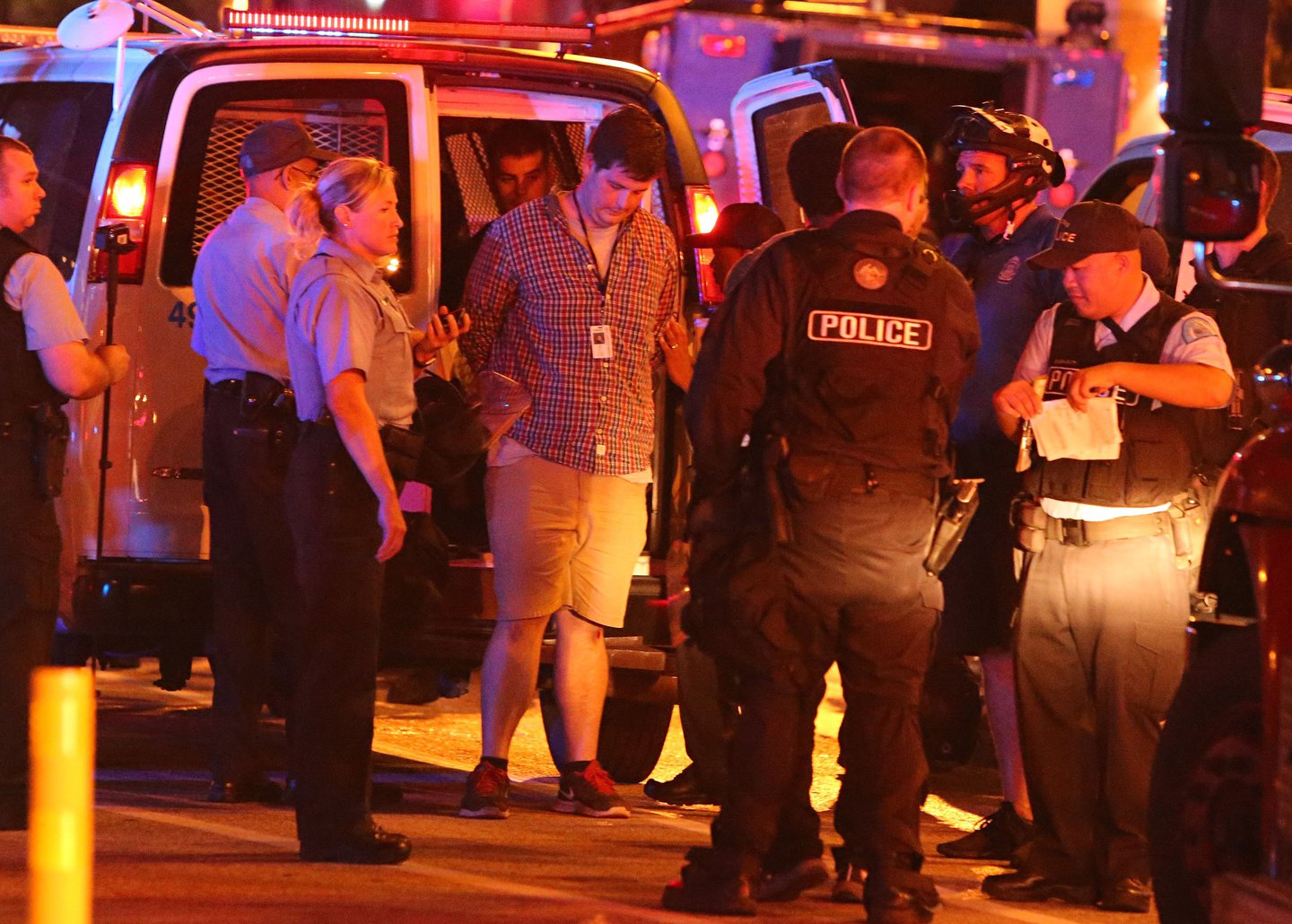 Journalists covering protests in U.S. risk getting caught up in police kettling tactic

On September 17 last year, St. Louis Post-Dispatch reporter Mike Faulk was covering protests over the acquittal of a former police officer in the killing a year earlier of man named Anthony Lamar Smith. At about 11 p.m., officers formed a line across Washington Avenue near Tucker Boulevard in downtown St. Louis, and officers in full riot gear blocked the other three streets. Hearing the order for protesters to "Move back," Faulk found that he had nowhere to go, according to an account by his lawyer.

Faulk was arrested alongside approximately 100 protesters, bystanders, and other journalists—all caught in a police tactic known as kettling. The method involves police encircling a group to prevent any exit before advancing, and it is often followed with indiscriminate detentions and arrests. Of the 34 journalist arrests documented by the U.S. Press Freedom Tracker last year, CPJ found that 22 were detained in kettles.

Journalists caught in kettles can face lengthy periods of legal uncertainty, high legal costs, and job insecurity, particularly if equipment is seized. Unlike staff journalists who are often released after police verify their credentials, freelancers can be vulnerable because they lack the backing of a large outlet to help secure their release or pay legal costs.

Post-Dispatch reporter Robert Patrick, who said he narrowly avoided the September kettle in St. Louis, told CPJ it was absurd that he could have been arrested like his colleague just for doing his job. "I wasn't protesting: I was watching what the police were doing, what the protesters were doing," Patrick said. "I was on the sidewalk, I wasn't—to my mind—doing anything that was illegal."

In 2004, the Council of the District of Columbia passed the First Amendment Rights and Police Standards Act to regulate and direct police actions that might chill free speech, including a directive to not kettle protesters. The only exception is if police have probable cause to believe that many participants committed unlawful acts and that officers are able to identify, and plan to arrest, those individuals. For nearly 15 years the use of kettling in D.C. halted.

Cities in other countries have banned the practice. After criticism over the use of kettling in protests around the G20 in 2010, police in Toronto, Canada, released a statement saying the tactic would not be used again.

Police in the U.S. however have used the tactic at several protests across the country in the past 18 months, including the inauguration protest in Washington, D.C., an environmental protest at Standing Rock, North Dakota, and an anti-hate protest in Portland, Oregon.

King Downing, director of mass defense at the National Lawyers Guild, told CPJ he was shocked when police used the tactic in St. Louis and Washington, D.C. He said that activists and lawyers whom he met in Missouri during a trip to follow up about the September kettle with local guild members, were as taken aback as he was. "Our feeling is that [kettling] somehow has moved or grown and we wonder the source," he said.

CPJ and the U.S. Press Freedom Tracker are aware of at least seven protests where one or more journalists were held in kettles since June 2016. In two incidents in St. Louis alone, 10 members of the media were arrested after being held in kettles on September 17 and October 3. Independent journalist Jon Ziegler, who livestreams under the handle RebZ.tv, was arrested in both. As is the case for all the reporters arrested in Missouri, as of early March police have neither dismissed nor filed formal charges of failure to disperse or trespassing.

In a lawsuit filed against St. Louis police on February 23, David Nelson, an attorney representing Faulk, wrote that the journalist was illegally assaulted, arrested, and detained, causing "continuing psychological and professional distress." The city's police are also facing a federal grand jury investigation into the September 17 arrests and a lawsuit initiated by the American Civil Liberties Union (ACLU). In the past 18 months the ACLU has sponsored suits in Washington, D.C. and Portland, in reaction to kettles.

St. Louis Chief of Metropolitan Police John Hayden told CPJ he could not comment directly on anything tied to the incidents in September and October, but he cited an ongoing review and a need for balance between "honoring their first amendment right while protecting the safety of the community as a whole."

Rachel Schaerr Reid, public affairs specialist for the D.C. Metro Police Department, told CPJ that because of ongoing litigation the department was unable to comment specifically on the inauguration day incident. In a statement emailed to CPJ, the police said they had responded to "another group of individuals who chose to engage in criminal acts, destroying property and hurling projectiles, injuring at least six officers." The Metro Police Department is due to release a response to the ACLU's case at the end of the month.

Seven of the journalists who reported being kettled to the U.S. Press Freedom Tracker said they were physically assaulted. In a lawsuit filed a few days after the September protest St. Louis, Drew Burbridge and his wife, Jennifer, both independent civil rights filmmakers, stated that unidentified city police officers assaulted and arrested them. In the complaint, Drew Burbridge alleged that two officers singled him out, sprayed pepper spray into his mouth and eyes, and ripped his camera from his neck. The officers threw him to the pavement and began kicking and hitting him while restraining his arms with zip ties. While beating him, the lawsuit states, one officer said, "Do you want to take my picture now motherf——-? Do you want me to pose for you?" At one point, according to the complaint, Drew Burbridge lost consciousness. Jennifer Burbridge described in the complaint how she watched as her husband was dragged away and was physically prevented from following. Officers taunted her, the legal complaint said, adding that one officer allegedly said, "Did you like that? Come back tomorrow and we can do this again."

In cases where charges are brought, the journalists face lengthy and costly legal proceedings, with the prospect of jail time. Aaron Cantú—an independent reporter who was one of nine journalists arrested during protests on inauguration day last January—faces up to 75 years in jail if convicted on all eight felony counts, including rioting and destruction of property, according to the Reporters Committee for Freedom of the Press. A jury acquitted Alexei Wood, an independent photojournalist who was also arrested while covering the inauguration protests, of eight separate felony counts similar to those faced by Cantú on December 21. But, the San Antonio-based photographer said, nearly a year of legal proceedings left him with substantial legal and travel expenses. He told CPJ he is also still waiting for police to return his Canon 7D camera body, memory cards, microphone, monopod, and phone, which will be held until the conclusion of all the inauguration trials.

Sara Lafleur-Vetter, an independent photojournalist and filmmaker, found her ability to work limited after police confiscated a camera and memory cards when they arrested her in Standing Rock on October 22, 2016. She told the Tracker that when she was released, her camera was returned but her SD cards remained in police custody until she was acquitted more than a year later. Cheney Orr, an independent photojournalist arrested on the D.C. inauguration protest, told the Tracker that police confiscated his equipment and, as of early March 2018, his memory cards and film still haven't been returned.

Faulk told CPJ in a written statement that his arrest in St. Louis "created an intolerable amount of professional uncertainty." Not only is Faulk wary of covering protests for fear of assault by police, his lawsuit states, but editors concerned about "a perceived conflict of interest will not permit him to report on the broad scope of governmental issues for which he was hired."

About Committee to Protect Journalists

The Committee to Protect Journalists is an independent, nonprofit organization that promotes press freedom worldwide. It defends the right of journalists to report the news without fear of reprisal.