Each month, this newsletter opens with a snapshot of categories from our home page. The above image shows data collected across four of our categories so far this year.

If the coronavirus slipped from No. 1 in my Mental Thought Olympics, it was but for a moment during the sunshine of widespread vaccine availability. With kids starting back at school across the country — and my own two heading back on the East Coast here shortly — that summer brain break was indeed fleeting.

There’s been no such reprieve for journalists in the field covering anti-vaccination protests, heated school board meetings about masks and even the Capitol riots of Jan. 6, where a photographer was singled out for wearing an N-95 mask, which rioters tried to pull off his face.

In the past 18 months, we’ve tracked at least two dozen coronavirus-related press freedom violations. According to Tracker archives, the first dates back to March 2020, when the Miami Herald's Tallahassee bureau chief, Mary Ellen Klas, was denied entry to the Florida capitol to attend Gov. Ron DeSantis' news briefing on the pandemic. Klas had requested social distancing and instead was excluded from the event.

Fast forward to this August 2021, and two reporters in Los Angeles are assaulted at an anti-vaccination rally at City Hall, a journalist in Michigan is accosted by a parent after a school board meeting on masks in school and a public media reporter in Florida is assaulted while covering protests against coronavirus mandates outside the Miami-Dade County Public Schools headquarters.

In addition to the assaults on journalists covering pandemic-related protests, more than a dozen journalists were harassed or threatened for wearing masks while reporting on the coronavirus and two subpoenas were issued for reporting materials and testimony that stemmed from an anti-vaccine rally. Both subpoenas were quashed. 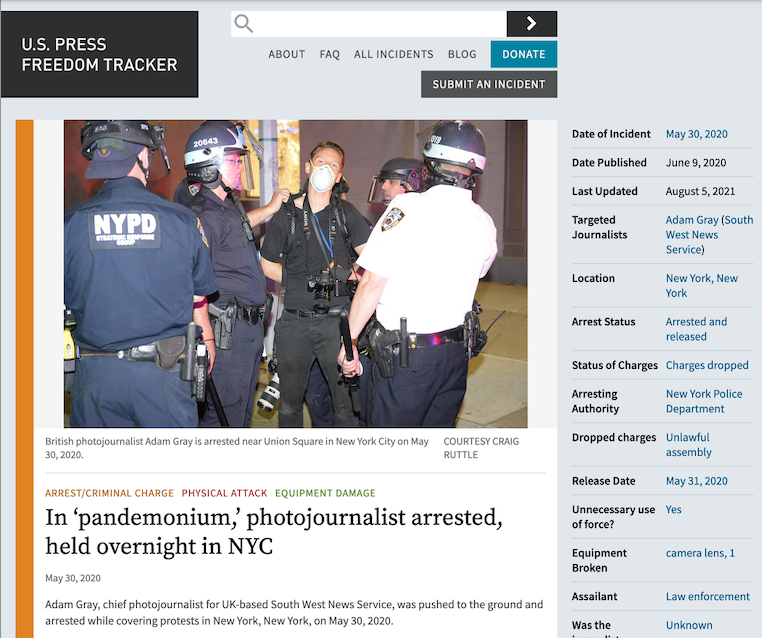 Lawsuit, part 1: On Aug. 5, a suit was filed by the National Press Photographers Association and the law firm Davis Wright Tremaine LLP on behalf of five photojournalists who claim their civil rights were violated when they were arrested or assaulted by the New York Police Department last year.

Read: Articles on each of the photojournalists, and updates on the lawsuit as it unfolds, here

Lawsuit part 2: The ACLU filed a lawsuit this month against the D.C. government and the Metropolitan Police Department claiming false imprisonment, assault and battery and unlawful use of chemical irritants on behalf of independent photographer Oyoma Asinor. Asinor was covering a Black Lives Matter protest in Washington, D.C,. one year before, in August 2020, when he was arrested by D.C. police and his camera and other equipment seized. The photographer was told he was being charged with felony rioting and held for 17 hours.

Criminal Charges: On Aug. 19, a man was arrested on felony charges that include assault on a member of the media during the riots at the U.S. Capitol on Jan. 6. Associated Press photographer John Minchillo was dragged through a mob and thrown over a wall. According to the Department of Justice, the Oklahoma man is the 8th person to be charged with crimes against the media during the Jan. 6 riots.

Read: Jan. 6 press freedom violations, in D.C. and across the nation, as documented by the Tracker.

Whether you’re heading back to school, back to the office, or somewhere inbetween, consider a donation to the Tracker to support our work.