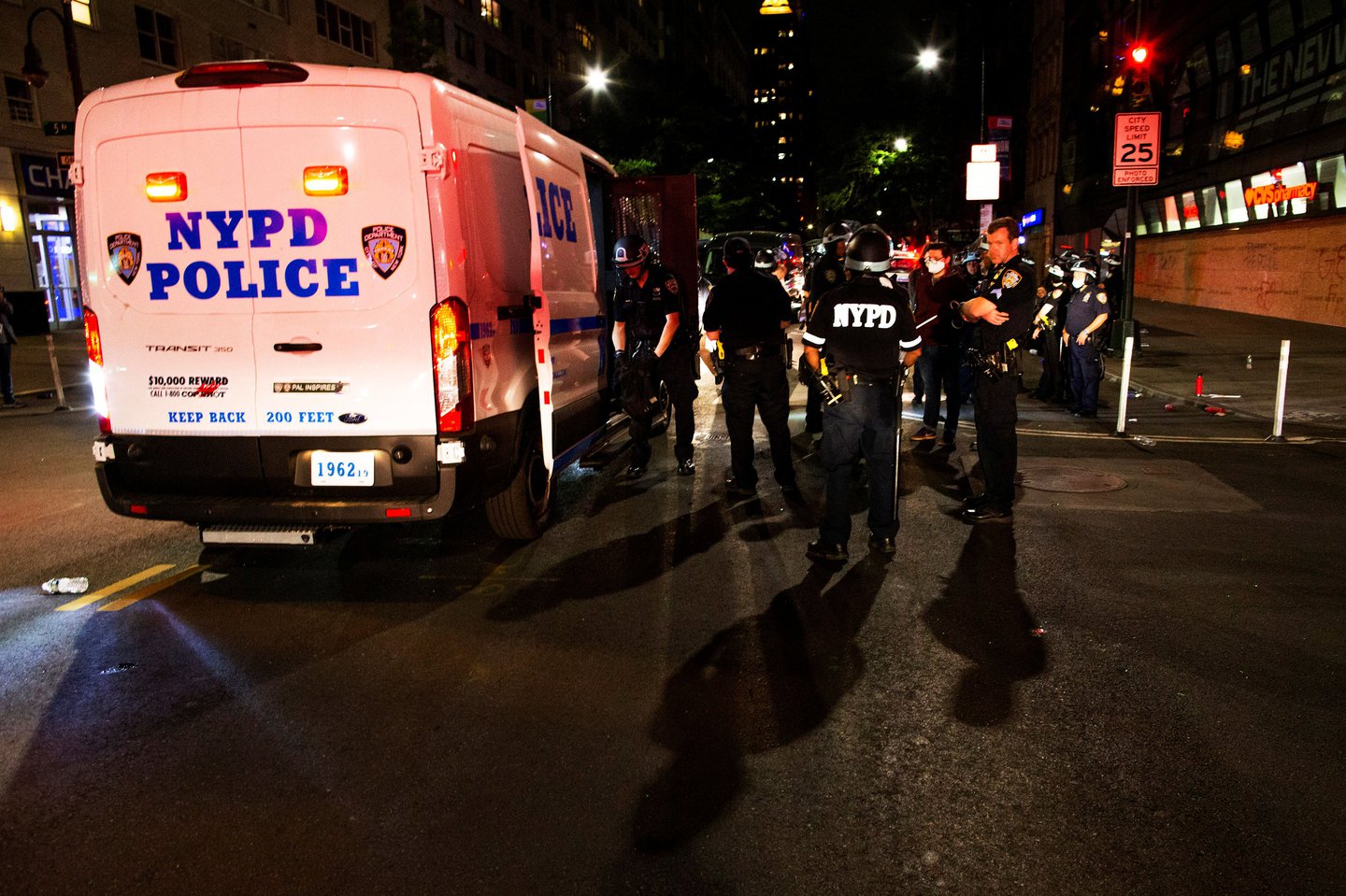 NYPD officers detain protesters for violating curfew during demonstrations in Manhattan on June 2, 2020.

Photojournalist Jae Donnelly was assaulted by a police officer while documenting protests in New York City on June 2, 2020. His camera and lens were also damaged in the attack.

Donnelly, who works for the U.K.-based Daily Mail, told the U.S. Press Freedom Tracker that he was documenting peaceful protests on the Upper West Side at approximately 9:30 p.m. An 8 p.m. curfew was in place that night, though members of the media were exempt as “essential workers.”

He told the U.S. Press Freedom Tracker that he was wearing his foreign press pass and had a helmet strapped to his backpack, though he hadn’t used it given how peaceful the protests had been for the previous three hours.

The protest was progressing down Ninth Avenue and had just passed near the Midtown North Police Precinct on 54th Street when everyone started running south, Donnelly wrote in an account for the Daily Mail.

“I looked back and behind the running crowd, the tail end of the protests, a bunch of NYPD officers were picking off anybody they could get their hands on and arresting them,” Donnelly said.

The final photograph Donnelly captured was of a highly decorated officer coming toward him with a wooden stick taken from a protester.

“I remember trying to get away as he came at me, while explaining, ‘I’m media,’” he said.

Footage captured by the Associated Press shows a second officer charging at Donnelly from his left and striking him over the arm and head with a baton. Donnelly then spins around and appears to hold out his press pass. Donnelly told the Tracker that he was identifying himself again as a photojournalist for the Daily Mail.

The officer is then seen charging and striking Donnelly again.

“He hit me with such force that I had no control over how I landed,” Donnelly wrote. The next thing he knew he was on the ground on the opposite side of the street, his cheekbone in pain and his DSLR camera and lens smashed.

Donnelly told the Tracker that he is sure that the officer deliberately chose to assault him.

“There was absolutely no way he could not have seen me holding up my press pass and shouting that I’m media,” Donnelly said. “He made a decision, and that was to harm me.”

Donnelly said that he tried to find a high-ranking NYPD officer to speak to about the incident. When he asked officers congregating around the precinct how to file a complaint, they told him to call 911 and speak to Internal Affairs.

“I’ve never felt in fear doing my job but what I was on the receiving end of Tuesday night is setting a really dangerous precedent,” he wrote in his account.

When asked for comment, an NYPD spokesperson directed the Tracker to the “30-minute mark” of a press briefing held by New York Mayor Bill de Blasio and Police Commissioner Dermot Shea on June 3.

Around that point in the recording, Shea says: “The only thing that I might add on the point of the press: We’re doing the best we can, the difficult situation. We 100 percent respect the rights of the press. Unfortunately we’ve had some people purporting to be press that are actually lying, if you can believe that. So sometimes these things take a second—maybe too long—to sort out.”

Donnelly told the Tracker that he has been unable to work since the incident due to the damage to his equipment.

Independent journalist Janet Burns said she was shoved by a police officer while covering a protest in New York City on July 25, 2020.Burns said she was covering a demonstration that night in Lower Manhattan, at the corner of Delancey and Ludlow streets, for NYC Protest Updates 2020, a Twitter account set up by a group of young journalists after the May killing of George Floyd in Minneapolis sparked nationwide protests. The Twitter account has over 40,000 followers and provides …

A man hit a New York Post reporter with a piece of lumber during a demonstration to cut police funding at New York’s City Hall on July 12, 2020, the Post reported. The man was later arrested and charged with assault, police said.The weeks-long “Occupy City Hall” protests in June drew hundreds of people who pressed elected leaders to slash $1 billion from the New York City Police Department’s annual operating budget of around $6 billion. Dozens of people camped …
More related incidents