Tony Holt, a reporter for the Arkansas Democrat-Gazette, was struck in the face and injured while he covered protests in Little Rock, Arkansas, on June 1, 2020.

Protests in Little Rock began after the death of George Floyd, a Black man, who was killed during an arrest in Minneapolis on May 25, 2020, when a white police officer kneeled on his neck for more than eight minutes. Floyd’s death prompted widespread demonstrations against racism and police violence across the country.

Holt was reporting on the third day of protests in Little Rock when he was hit and hurt to the point of needing medical treatment.

Holt didn’t respond to a request for comment. Arkansas Democrat-Gazette Managing Editor Eliza Gaines detailed the incident in an interview with the U.S. Press Freedom Tracker.

Shortly before he was attacked, Holt tweeted that hundreds of people were still out a few minutes past the city’s 10 p.m. curfew. People had been throwing rocks through windows and damaging property, Gaines said. Holt was “in the thick of it,” she said, when he felt someone take his reporter’s notebook from his pocket. Then he was struck with something.

Gaines said many of the details around the attack were unclear. Holt doesn’t know exactly what happened to him, or who did it, she said.

A “good Samaritan” got him to emergency services, she said, and he was transferred to a hospital. Editors — alerted to the attack by a tweet Holt sent at the time — went to wait for word of his status outside the building, since Covid-19 restrictions barred them from entering.

The following day, Holt posted on Twitter that his nose was broken in the attack and that he was in the hospital for five hours.

“I have no memory of the attack last night in Little Rock, but there was a small group among the rioters who clearly didn’t want me there,” he wrote.

I have no memory of the attack last night in Little Rock, but there was a small group among the rioters who clearly didn’t want me there. Suffered a broken nose, but no other fractures. All journos, seriously, be careful. I got too close and paid for it w/ a 5-hour hospital stay pic.twitter.com/Dju2BfdsZ6

Holt wasn’t wearing anything that would clearly mark him as a reporter, Gaines said, though he had credentials with him and carried a notebook. The newspaper bought vests with the word “press” on the back for reporters after the assault on Holt, Gaines said, but “we realized it might put a target on someone's back.” Reporters can decide whether or not to wear them, Gaines said.

“It'd be good if you had it so the police could see it but otherwise it's kind of, you know, alerting others that you're press,” she said.

Gaines said she didn’t believe the incident had been reported to police. A spokesperson for the Little Rock Police Department said police weren’t aware of the incident.

Two days earlier, reporter Shelby Rose of KATV Channel 7 News was shouted at and struck with an object while she was broadcasting live from protests in Little Rock.

The U.S. Press Freedom Tracker is documenting several hundred incidents of journalists assaulted, arrested, struck by crowd control ammunition or tear gas or had their equipment damaged while covering protests across the country related to the death of George Floyd and others while in police custody. Find all of these cases here. 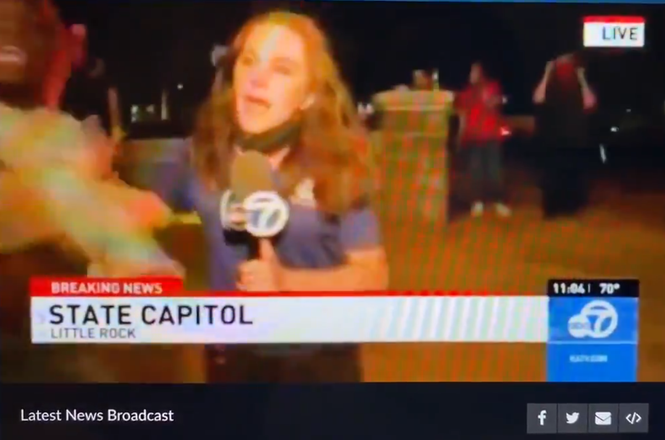 Shelby Rose, a reporter with KATV Channel 7 News, was assaulted during a live broadcast while covering protests in Little …

KATV News reporter Shelby Rose said she and several colleagues were hit with tear gas deployed by police while they covered protests in Little Rock, Arkansas, on May 30, 2020.The demonstrations in Little Rock were among many anti-racism protests across the country that were sparked by the May 25 killing of George Floyd in Minneapolis, as well as other deaths of Black people at the hands of police.Rose was covering the protests in downtown Little Rock as tensions escalated between …