Minneapolis police briefly detained a Nine News Australia news crew and security guard in the early hours of May 31, 2020, the outlet reported. Cameraman Adam Bovino and U.S. Correspondent Tim Arvier were covering the fifth night of protests in Minneapolis, Minnesota.

The protests were held in response to a video showing a white police officer kneeling on the neck of George Floyd, a Black man, during an arrest in Minneapolis on May 25. Floyd was pronounced dead at a local hospital. Protests against police brutality and in support of the Black Lives Matter movement have been held across the U.S. since the end of May.

Arvier reported that police and the Minnesota National Guard deployed throughout Minneapolis on the night of May 30 in an attempt to assert control. The Nine News crew documented protesters marching in defiance of an 8 p.m. curfew as the police pushed back with less-lethal projectiles and tear gas.

The crew was driving to find a backdrop for a live interview when they heard gunfire and encountered a police roadblock, Arvier told the Tracker.

“We didn’t want to approach the roadblock, or drive up to it because obviously we’d seen numerous examples in the past 48 hours of how jumpy the police were,” Arvier said.

So Bovino stopped the car short of the roadblock and waited for the police to notice them, Arvier told the Tracker. As the police officers approached, the crew held their hands out the windows and shouted that they were press.

Two officers seemed calm, Arvier said, but a third yelled at them to get out of the car and drew his firearm.

“That’s when I hit record on my phone and held my phone up in my hand to record all this happening, just to have a record,” Arvier said. The crew tried to remain calm to avoid misunderstandings that could have escalated, he told the Tracker.

The security guard, who the crew hired after observing street violence, informed the police that he had weapons in the car, Arvier said.

In Arvier’s video, a police officer warns other officers to not let the journalists and the security guard drop their hands because there are guns in the car.

Arvier asks an officer in the video if it is okay to keep holding his phone in his raised hands. The officer responds, “You’re good.”

Bovino, who declined an interview because Arvier had already spoken with the Tracker, said in an email that the officer who drew a firearm handcuffed him. Officers escorted Bovino and the security guard in handcuffs to the curb.

A third officer searched Arvier, who continued to film. Additional footage shows Arvier holding his credentials in one hand as he’s searched. As he is patted down, Arvier explains to the officer that he is wearing a bulletproof vest.

In the video, an officer explains why the Nine News Australia crew was being treated carefully. “You can hear all the gunshots going off all around us. It’s like a warzone,” the officer said. “And here you guys are in bulletproof vests with a rifle in the car.”

Arvier was escorted to the curb, but he was not handcuffed like his colleagues. After the police checked their press credentials, the crew was released. Arvier said the crew was carrying press passes issued by the Los Angeles Police Department since their bureau is based in Los Angeles.

The police warned the journalists that it was dangerous to be out and advised them to return to their hotel for their safety, Arvier said.

Arvier said they had been treated respectfully and he understood why the police would be anxious. But it was unclear why they had to be detained and handcuffed. They had previously been pulled over to have their credentials checked without issue, Arvier said.

“If it wasn’t for the one police officer there, I get the feeling that the other ones would’ve handled it a lot more calmly and we probably would have been fine like we were the first time we were pulled over,” Arvier said.

Minnesota Police Department spokesperson John Elder told the Tracker he was unable to comment about this and other incidents involving the press. He said, “Every use of force by the MPD is under investigation internally.”

The crew’s detention on May 30 was one of several incidents involving the police during the days of protests, Arvier told the Tracker. On the night of May 29 the crew was pinned down in a parking lot in the 5th Precinct as police confronted protesters with tear gas and rubber bullets, Arvier said. They were trying to return to their car to send footage back to Australia, but the police line blocked their way. When the crew tried to approach the line while identifying as press, the police yelled at them to get back. Police eventually escorted Bovino to the team’s vehicle to retrieve the equipment they needed. The vehicle had a large dent that the journalists presumed came from a tear gas canister strike.

On May 31, the crew was filming police push back protesters near a highway, Arvier said. The crew positioned off to the side so that they could either fall back on the highway or behind police lines to stay safe, Arvier said. But Nine News footage shows Arvier and Bovino forced by police to run through tear gas. "That is ugly, ugly scenes," Arvier said in a video posted to Twitter as he struggled with the effects of the tear gas.

Minneapolis Police briefly detained a Nine News Australia news crew and security guard in the early hours of May 31, 2020, the outlet reported. U.S. Correspondent Tim Arvier and cameraman Adam Bovino were covering the fifth night of protests in Minneapolis, Minnesota.The protests were held in response to a video showing a white police officer kneeling on the neck of George Floyd, a Black man, during an arrest in Minneapolis on May 25. Floyd was pronounced dead at a local … 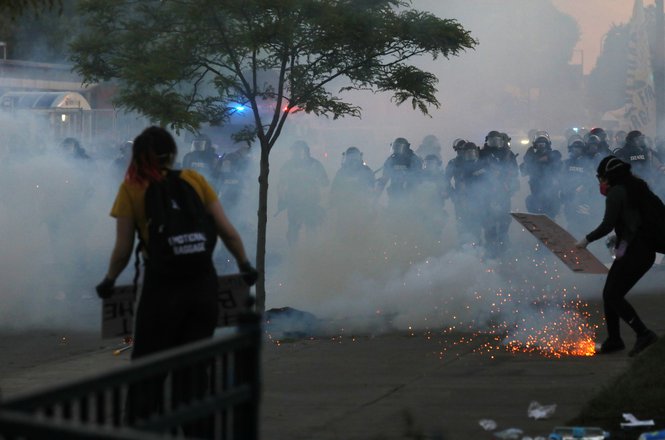 Jika González, a producer for VICE Media, and three colleagues were arrested on May 30 in Minneapolis, for being out after curfew while covering ongoing protests.The protests were held in response to the death of George Floyd, a Black man who died in Minneapolis on May 25. During an arrest, a white Minneapolis Police officer kneeled on Floyd’s neck and ignored Floyd’s pleas that he could not breathe. Floyd was later pronounced dead in a hospital.González told the Committee to …

Ellis Rua, a camera operator for VICE Media, and three colleagues were arrested on May 30, 2020, in Minneapolis for being out after curfew while covering ongoing protests, Rua told the Committee to Protect Journalists.The protests were held in response to the death of George Floyd, a Black man who died in Minneapolis on May 25. During an arrest, a white Minneapolis Police officer kneeled on Floyd’s neck and ignored Floyd’s pleas that he could not breathe. Floyd was later …
More related incidents