Journalist arrested and charged with breaking curfew in Minneapolis

Journalist Sam Richards, a freelancer who writes for Vice News and other outlets, was arrested and charged with a misdemeanor for breaking curfew while covering civil unrest in Minneapolis, Minnesota, on Aug. 27, 2020.

On the night of the 27th, Richards said he was documenting the effects of the second night of a city-wide curfew, posting reports on Twitter. Minneapolis Mayor Jacob Frey had imposed the curfew the day before in the wake of civil unrest.

Richards told the U.S. Press Freedom Tracker that shortly after the curfew went into effect at 8 p.m., he was on Nicollet Mall, a shopping and dining district in downtown Minneapolis, when he saw a man being arrested. Richards began filming the man, and approached the group of law enforcement officers to ask them about the situation, he told the Tracker. Moments later, he said, several officers surrounded him, constrained him in zip ties, and put him under arrest for violating the curfew.

Richards said he was not wearing any press credentials, but told the officers several times that “I am a reporter and we are exempt from the curfew.” He said he also gave them the name of the outlets he works for, as well as his Twitter handle, in hopes they would look up his work online. But they did not, according to Richards. The city’s declaration of local emergency states that members of the news media are exempt from curfew.

Richards and the man he’d been filming were taken to the Hennepin County Jail, where they were processed and then released shortly after 9 p.m., he told the Tracker.

After being released, Richards said he took “the long route home,” and continued to document what he saw along the way. In a video he posted to Twitter on his walk he said he was told “If I was spotted out here again then I would be arrested, which was confusing because I was under the impression that I was already arrested.”

Video of my curfew arrest didn't save, here is a quick summation. #Minneapolis pic.twitter.com/5EQeo64vHm

According to a citation notice that Richards shared with the Tracker, the journalist was charged with violating an imposed curfew and was called to appear at an arraignment on Dec. 28. Violation of curfew is a misdemeanor offense in Minneapolis and “is punishable by a fine not to exceed $1,000.00 or imprisonment for not more than 90 days, pursuant to Minnesota Statutes, Section 12.45, and MCO Section 1.30,” according to the City of Minneapolis website.

Charges were dismissed against Sam Richards, a freelancer who writes for Vice News and other outlets, on Nov. 19, 2020, for violating the city’s curfew order according to filings the Minneapolis City Attorney’s office shared with the Committee to Protect Journalists.

Richards told the U.S. Press Freedom Tracker that he was documenting the effects of the second night of a city-wide curfew when he saw Minneapolis Police Department officers arresting someone. As he moved closer to film and question officers about the incident, several officers placed him under arrest.

According to the filing, the official charge brought against Richards was failure to comply with a lawful order, and it was dismissed under prosecutorial discretion. 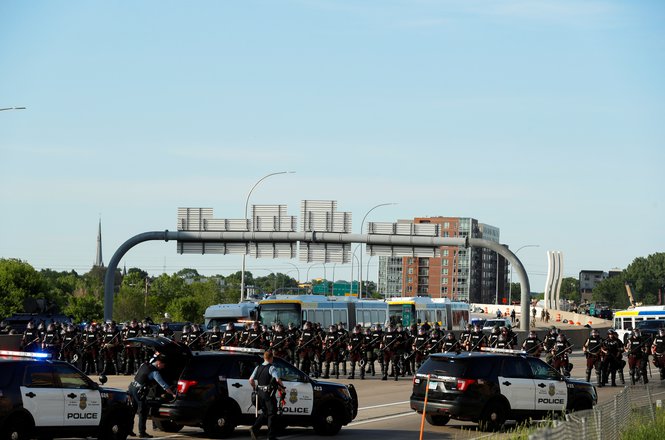 NBC News journalist Simon Moya-Smith was pepper-sprayed and detained while covering protests in Minneapolis, Minnesota, in the early hours of …
More related incidents