Broadcast reporter threatened, spat on by man at event with Michigan governor

An individual was caught on film assaulting a news team for NBC-affiliate UpNorthLive, based in Traverse City, Michigan. Video posted by the station shows the man throwing one of the news team’s microphones and spitting on a camera during an event with Michigan Gov. Gretchen Whitmer on May 6, 2021.

The news team was covering an outdoor event in Greilickville, at which Whitmer signed a bill authorizing spending to protect Michigan’s natural resources, UpNorthLive News reported. The man first heckled the governor, shouting profanities during her speech and yelling “We don’t want you here,” before turning to criticize journalists covering the event, according to the broadcaster’s account.

UpNorthLive reporters Natalie Spala and Cortney Brown covered the signing and were scheduled to interview the governor right after, but the interview was canceled when officials escorted Whitmer away from the heckler to her car, the outlet reported.

According to UpNorthLive, the man “then turned his attention to the UpNorthLive news crew, asking if he should destroy the reporter’s [Brown’s] camera before taking a microphone and throwing it across the parking lot.” Spala's assault is documented here.

Leelanau County Sheriff’s deputies at the scene intervened and arrested the man immediately, but as he was being handcuffed he spat on Brown and the camera she was carrying.

“OK, that’s unnecessary,” Spala can be heard saying in the footage published by UpNorthLive.

Brown confirmed in a Facebook post that she was spat on and verbally threatened by the individual.

In an interview with the outlet, Sheriff Mike Borkovich said, “We have been in contact with this individual before, mostly regarding political-type things. I personally believe that’s not normally what he has done but I do think when you cross the line, people have to know that we will enforce the law.”

Neither of the reporters nor the station’s news director responded to emailed requests for comment.

The man was transported to the Leelanau County Correctional facility, where he was processed and charged with two counts of assault and battery and one count of malicious destruction of property, according to a Facebook post by the Sheriff’s Office.

According to the sheriff’s office, he is currently in the Leelanau County Jail on two counts of assault and battery and one count of malicious destruction of property.https://t.co/HIV7ElZjsa

UpNorthLive reported that the man, a 39-year-old Traverse City resident, was released on a $100 interim bond later that night.

Sheriff Borkovich told the U.S. Press Freedom Tracker that the arraignment of the arrested man was scheduled for June 8.

An individual was caught on film assaulting a news team for NBC-affiliate UpNorthLive, based in Traverse City, Michigan. Video posted by the station shows the man throwing one of the broadcast team’s microphones and spitting on a camera during an event with Michigan Gov. Gretchen Whitmer on May 6, 2021.The news team was covering an outdoor event in Greilickville, at which Whitmer signed a bill authorizing spending to protect Michigan’s natural resources, UpNorthLive News reported. The man first heckled the … 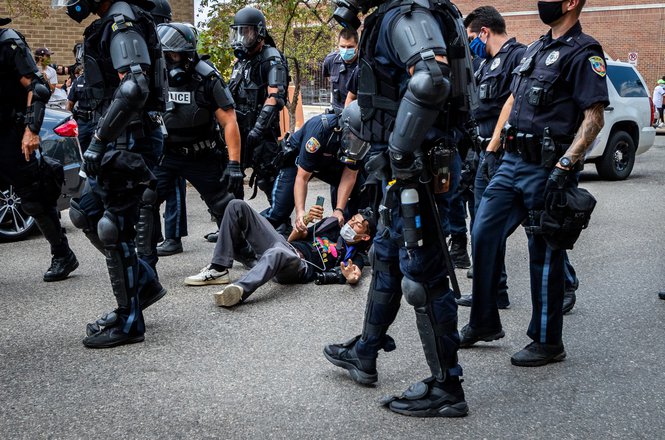 MLive reporter Samuel Robinson was arrested while covering a rally in Kalamazoo, Michigan, on Aug. 15, 2020.Robinson, who did not …

Detroit News reporter Jordyn Grzelewski and freelance photographer Sean Work were physically assaulted by police officers while covering protests against police violence in Detroit, Michigan, on June 2, 2020.Both journalists had been following protesters as they marched through downtown that evening. Grzelewski told the U.S. Press Freedom Tracker that as the city’s 8 p.m. curfew approached, she was reporting along Gratiot Avenue between Conner Street and Outer Drive, documenting the scene on Facebook Live.In the video, a line of police …
More related incidents