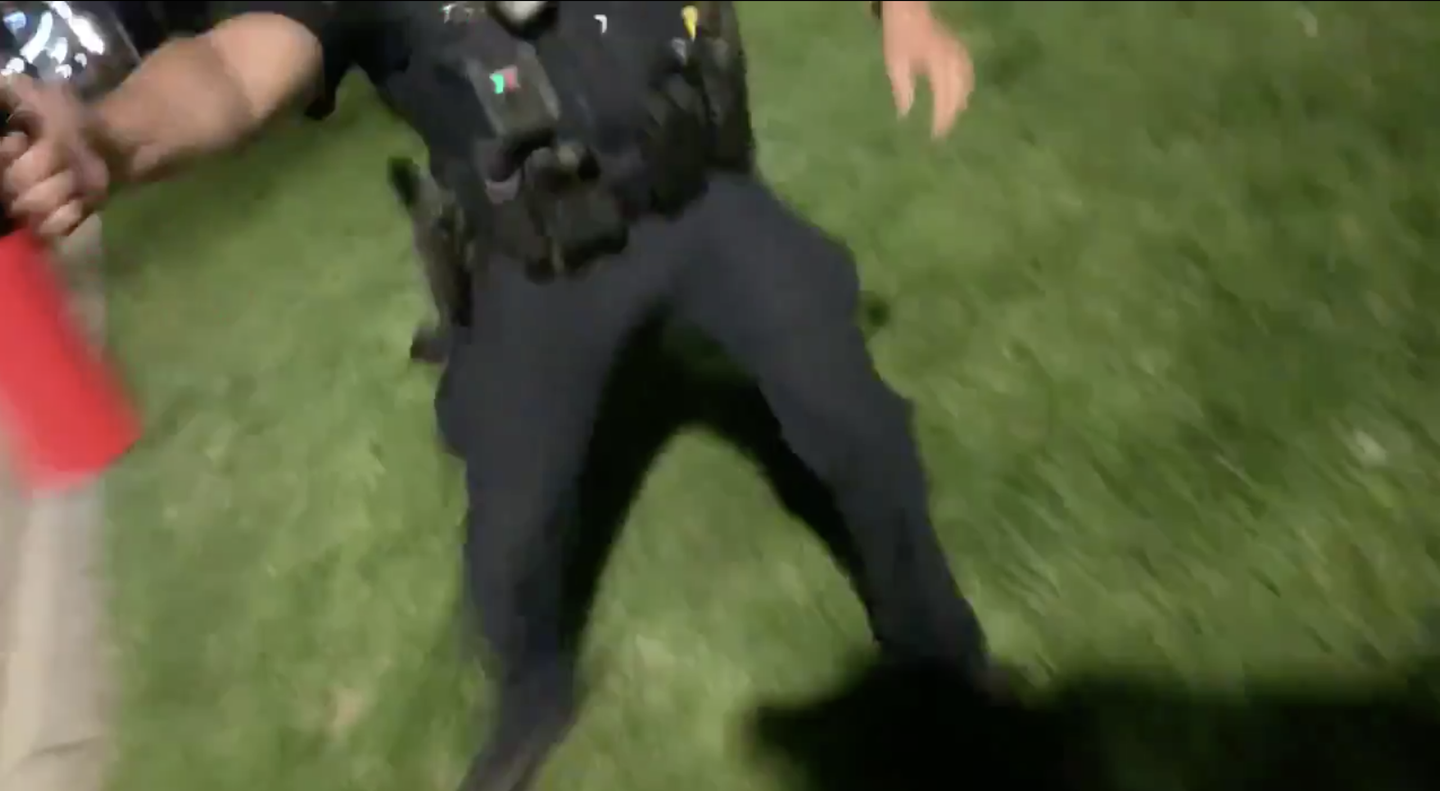 Des Moines Register reporter Katie Akin caught on camera the moment a police officer pepper sprayed her in the face as she was moving out of the way of police on June 1, 2020.

In the chaos following a dispersal order by the Des Moines police at a June 1, 2020, protest, a police officer pepper sprayed Des Moines Register reporter Katie Akin, hitting her in the eye and ear. A video she took of the incident shows her repeatedly identifying herself as press while fleeing from a clash between police and protesters.

The June 1 protest was one of a series in Des Moines that began after the May 25 death in Minneapolis of George Floyd, a Black man who was killed by a white police officer. As the protests continued, on May 31 the Polk County, Iowa, Board of Supervisors implemented a 9 p.m. curfew due to “the violent outbreak of civil unrest” in Des Moines. Protestors defied the curfew, Akin told the U.S. Press Freedom Tracker in a phone interview, but their demonstrations remained “pretty orderly.”

Akin’s tweets created a timeline of the protest that congregated at the state capitol just before 11 p.m on June 1, where several hundred protesters confronted 50 police officers lined up at the top of the steps. At 11:30 p.m., Akin tweeted that the crowd heard a police officer announce an unlawful assembly.

Akin told Tracker that she and fellow Des Moines Register reporter Shelby Fleig chose a grassy spot off to the side to separate themselves from the clash while still being able to record the confrontation between police and protesters. She said she and Fleig each had press badges and “tried to stay out of the way.”

At 11:40 p.m., Akin tweets, “Shelby and I are safely to the side (hopefully). A protester near us said the police said it’s the final warning. Crowd holds their hands up. A tense moment.”

Two videos posted by Akin document the police line moving down the capitol steps to confront the protestors. The videos, which Akin shot from some distance to the side of the protests, also show more officers arriving from different directions, as police begin clearing the crowd using pepper spray and flash bang canisters. In the first video, as protestors flee the scene, Akin also begins to move away, passing by police officers as she goes. Several police officers lower their batons and let her pass as she yells repeatedly “I’m press,” “I’m with the Des Moines Register,” and “I’m going.” Akin identifies herself as press 17 times in 30 seconds.

Here’s the advance. Shelby and I are safe with an editor now. pic.twitter.com/S2MphcXuSF

The second video shows some of the same footage of Akin fleeing the scene past police officers. Then one officer, holding a red spray can, runs up to her as she is yelling, “I’m with the Des Moines Register, I’m going, I’m going.” The officer yells, “Get the fuck out of here,” and sprays Akin with the canister. She continues running away, eventually is reunited with reporter Fleig, and says that she was hit with pepper spray and can’t see out of her eye.

Here’s me getting pepper sprayed. pic.twitter.com/YlDnLezPLR

The following morning, Gov. Kim Reynolds held a news conference, where Iowa Department of Public Safety Commissioner Stephan Bayens answered a few questions about the protests. Bayens said law enforcement’s response to the protests had been defined by “restraint, restraint, restraint,” adding that law enforcement did not have “any desire to see anyone that is there in a peaceful capacity or as a member of the media to get caught up with [pepper spraying and all] that.”

A Des Moines Register article from the next day reported that Executive Editor Carol Hunter asked Des Moines police to conduct an internal review of the incident. Akin said she gave a statement to police shortly after that but has not heard any updates since.

The morning podcast 1460 KXNO Morning Rush, located in Des Moines, has a weekly segment called “Ask 5-0 anything,” in which police officer Paul Parezik answers callers’ questions. During the June 2 program, Parezik, who is seen as an informal spokesperson for the Des Moines police, reflected that members of the media “have to step to the side and get out of the mix” when dispersal orders are given. He also spoke on the necessity of having clear credentials.

Akin said that she and Fleig both had clear credentials. As for getting “out of the mix,” Akin — whose videos were shot a clear distance from the protestors — told the Tracker she “can’t think of a way that I could be close to the action and seeing what was going on without getting squeezed into it.” 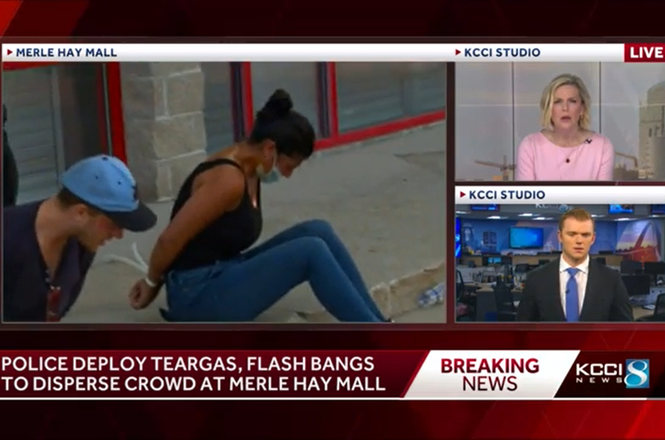 Police pepper-sprayed and arrested Des Moines Register reporter Andrea Sahouri while she was covering protests in Des Moines, Iowa, on …

A photojournalist covering protests in Des Moines, Iowa, tweeted that he was hit in the thigh by a rubber bullet fired by police on May 31, 2020. 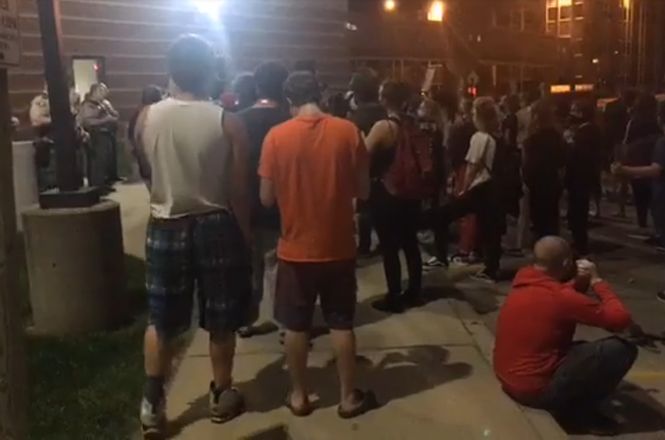 Journalist Ross Mosier was hit with a pepper ball and an unidentified crowd-control spray used by police officers while covering a protest in Omaha, Nebraska, on Nov. 22, 2020.On the night of Nov. 22, protesters had gathered outside the central headquarters of the Omaha Police Department in downtown Omaha. The demonstrators were protesting against the Nov. 19 killing of a Nebraska man, Kenneth Jones, by a police officer, and demanding that authorities release body cam footage of the incident.Mosier is …
More related incidents