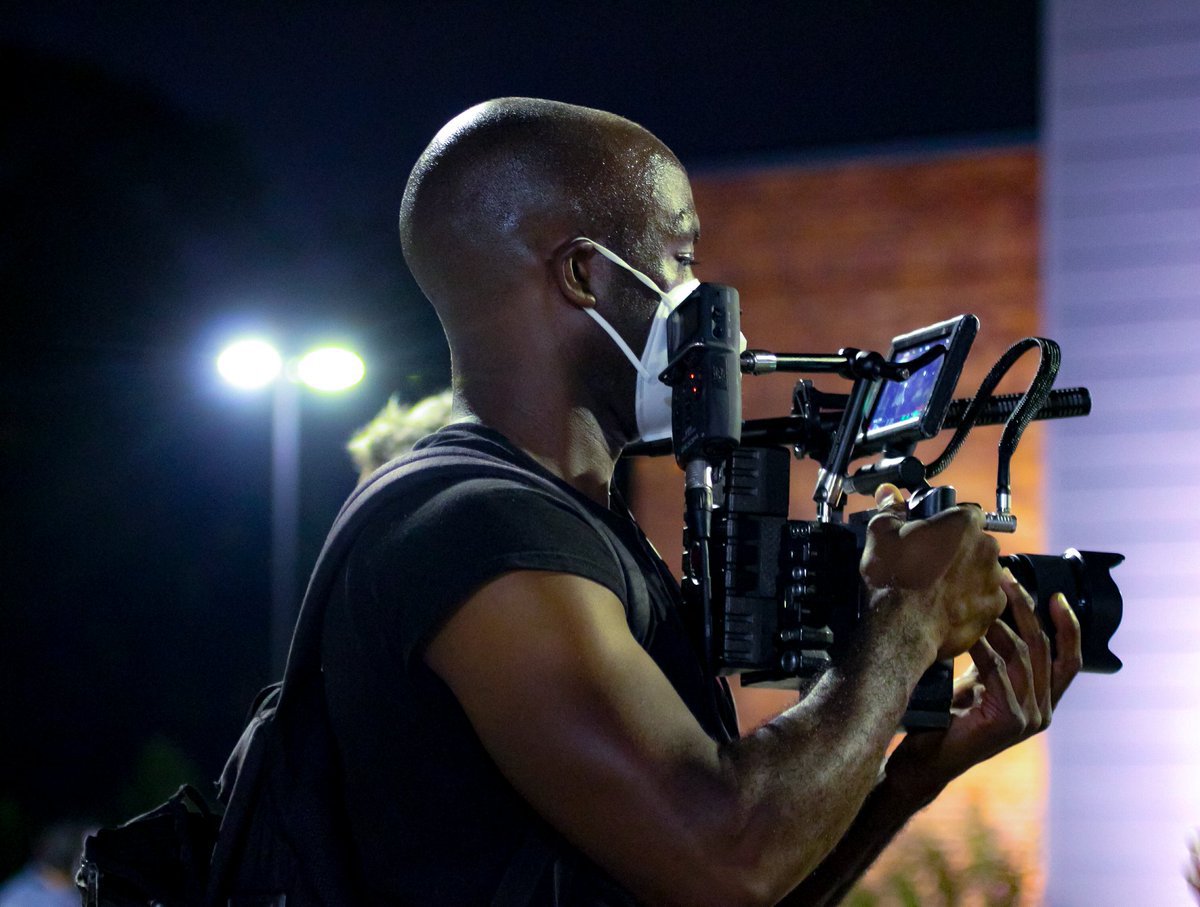 While covering an on Aug. 9, 2020, protest in Ferguson, Missouri, filmmaker Chris Phillips was pepper-sprayed at close range by law enforcement. “For me to get sprayed like that — that was a deliberate act,” he said.

Chris Phillips, an independent filmmaker, was hit in the face with pepper spray at close range while he covered a protest in Ferguson, Missouri, on Aug. 9, 2020.

The demonstration was held on the sixth anniversary of the day Michael Brown, a Black teenager, was shot and killed by police in 2014. Mass protests against police violence and racial injustice were held across the U.S. for months in 2020, fueled by the killings of George Floyd in Minneapolis and Breonna Taylor in Louisville, Kentucky, among others.

Phillips, a resident of the same complex where Brown lived, made a documentary, Ferguson 365, about the movement that followed Brown’s killing, and has been documenting the aftermath of Brown’s killing ever since. Phillips runs the production company Maverick Media Group and said his work has been published by outlets including the Associated Press and CBS.

He went to pick up a camera battery he had left charging on the opposite side of the street from the police department. As he pulled the plug from the outlet, he said he heard screaming and turned to see police rush into the crowd.

Phillips said he grabbed his camera and started toward the confrontation to film it. His camera was still powering up, he said, and he was getting positioned to film two police officers who were throwing someone to the ground. Suddenly, he said, a different police officer fired pepper spray into his face from less than 10 feet away. Phillips said there were no protesters close to him at the time.

“For me to get sprayed like that — that was a deliberate act,” he said.

Phillips said the spray was very painful and temporarily blinded him. He said he turned around and tripped, slamming his camera into the pavement.

Protesters came to his aid and helped him to a medical station, where they tried to neutralize the impact of the spray with milk and water, he said. His eyes and face hurt for two days after he was sprayed, he said.

Thank you @MissJupiter1957 for capturing this. One of my eyes is still in pain this morning from the pepper spray. The police use these harsh chemicals without warning. #policebrutality #policeaccountability #ferguson #ferguson365 https://t.co/udquiBycKa

Phillips said he heard no warning before police rushed into the crowd, or before he was sprayed. He wasn’t wearing any form of press identification, he said, but he was carrying an elaborate, professional-grade cinema camera. He said he didn’t have an opportunity to identify himself to police before he was pepper sprayed, though he is well-known as a filmmaker in Ferguson, according to other journalists in the area.

Chris Phillips of Maverick Media was pepper-sprayed. He is well-known media by everyone in Ferguson and STL. This is what journalists deal with in Ferguson since 2014.

Phillips said his camera rig was inoperable after the fall. The only component that still worked was the microphone. He said the RED Scarlet-W “brain” of the camera, which he purchased for $12,500, suffered significant interior and exterior damage, so he decided to replace it with a newer model, which he did with the help of an online fundraiser. He also needed to replace a $280 Zoom H-5 audio recorder that was damaged. He said he hadn’t been in contact with police about the incident, but he was considering his legal options.

St. Louis County Police Department spokesperson Tracy Panus told the Tracker in an email that the agency wasn’t familiar with Phillips or aware that he was pepper sprayed. According to Panus, police directed protesters to disperse multiple times over a loudspeaker before beginning to arrest people who didn’t follow the orders.

“While taking several individuals into custody, St. Louis County Police Officers did deploy pepper spray in an effort to make the arrests or prevent interference by others attempting to interfere with those arrests,” Panus said.