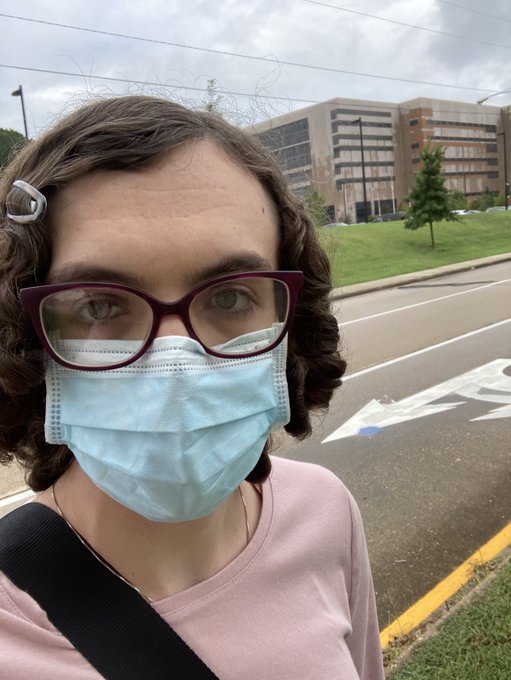 Independent reporter Lynn Murphy, who said she reports on social media about protests, was arrested while covering a demonstration in Richmond, Virginia, early in the morning of Sept. 24, 2020.

The Richmond event was held in response to a Kentucky grand jury’s decision on Sept. 23 not to bring charges against police officers for the shooting death of Breonna Taylor, a 26-year-old Black woman who was killed in her home in Louisville on March 13, 2020.

Murphy is one of three activist journalists who recently told Virginia Public Media they believe Richmond police have targeted them for their coverage of racial justice protests in 2020. She told the U.S. Press Freedom Tracker that on the day of the grand jury decision in Kentucky, she had been covering a march in Richmond that turned into an hours-long standoff at the police headquarters, continuing past midnight.

Murphy said when she approached one part of a police line outside the building, an officer greeted her by name. Murphy, who was taking photographs, said the officer said she would help Murphy get a better photo. According to Murphy, the officer then stepped up close to her face, grabbed her arm and pulled her through the line of police in order to arrest her. Murphy said she was pulled through the line just as police advanced toward protesters. Richmond activist Jimmie Lee Jarvis tweeted at 1:44 a.m. that police had “snatched” Murphy from the crowd; a video Jarvis posted shows police officers moving toward protesters.

Murphy said she dropped her phone as the officer pulled her. Her glasses were also knocked off and broken, and her arm was bruised, she said.

A Richmond police sergeant told Murphy that she was being taken into custody for an outstanding arrest warrant, but Murphy said the sergeant couldn’t tell her any specific information about the warrant. She said she later learned that the warrant was for a charge of “obstructing free passage” on Sept. 14, when Murphy had been reporting on another protest in Richmond. Murphy said that on that day, she had been covering the protest from the sidewalk with other reporters and was never spoken to by police.

Murphy said police restrained her wrists with zip-ties and transported her to the Richmond City Justice Center, where she was held for 12 hours. At 2:45 a.m., while she was in custody, a magistrate set bond for her at $1,500, according to Murphy. But when a bail bond representative arrived later, the representative was told bail had not been set, Murphy said.

Murphy said she was released after her arraignment on the morning of Sept. 24. At a Nov. 19 hearing, the case was continued until March 2021. Murphy said the charges are still pending while her lawyer seeks to probe whether police unlawfully searched her phone.

Murphy said she got her phone back from police on Nov. 6. When she retrieved it, the case was missing, the screen protector cracked, and the SIM card had been removed, she said. Murphy believes police searched her phone, but she said there was no way for her to determine whether the device had been searched. She said police asked for her passcode, which she did not provide.

According to Murphy, a detective told her multiple times that police were keeping the phone because they had a sealed warrant for it, but she has not been able to locate any warrant in either the circuit or district court.

Murphy said she was wearing a press badge at the time of her arrest. She said that she did not identify herself to police as a reporter, but she believes officers with the police department are familiar with her because they refer to her at protests as “Lynn from Twitter.”

“I really just see them as malicious, the way they target us like this,” Murphy said.

The Richmond Police Department confirmed to the Tracker that detectives had held her phone “due to the ongoing investigation.” The department did not respond to further questions about a warrant.

Independent reporter Lynn Murphy told the Committee to Protect Journalists, a founding partner of the U.S. Press Freedom Tracker, that she agreed to a deal with the Richmond City Attorney on March 2, 2021. In exchange for her performing 15 hours of community service, the prosecutor agreed to drop the charges against her without stipulation of guilt.

Murphy, who said she reports on social media about protests, was arrested while covering a demonstration in Richmond, Virginia, early in the morning of Sept. 24, 2020, and charged with obstruction of free passage.

“I was prepared to turn this deal down, as the charges against me were truly absurd,” Murphy told CPJ. However, Murphy said, the prosecutor threatened to have additional charges of unlawful assembly brought against her if she refused the deal.

Murphy said the charges against her will remain pending for 90 days, after which time they will be dropped if she can prove that she completed the hours of community service.

Independent reporter Lynn Murphy told the U.S. Press Freedom Tracker the charges against her were officially dropped on June 3, 2021, following her completion of 15 hours of community service.

Murphy, who said she reports on social media about protests, was arrested while covering a demonstration in Richmond, Virginia, early in the morning of Sept. 24, 2020, and charged with obstruction of free passage. Murphy agreed to a deal with the Richmond City Attorney in March 2021 that in exchange for her performing the hours of community service, the prosecutor agreed to drop the charges against her without stipulation of guilt.

“I already work two other jobs, so doing community service even though it was just a few hours was frustrating,” Murphy said in a call with the Tracker. “It was just a completely fabricated charge by a department that wanted to silence independent reporting, and I’m just glad to not have to deal with it anymore.”