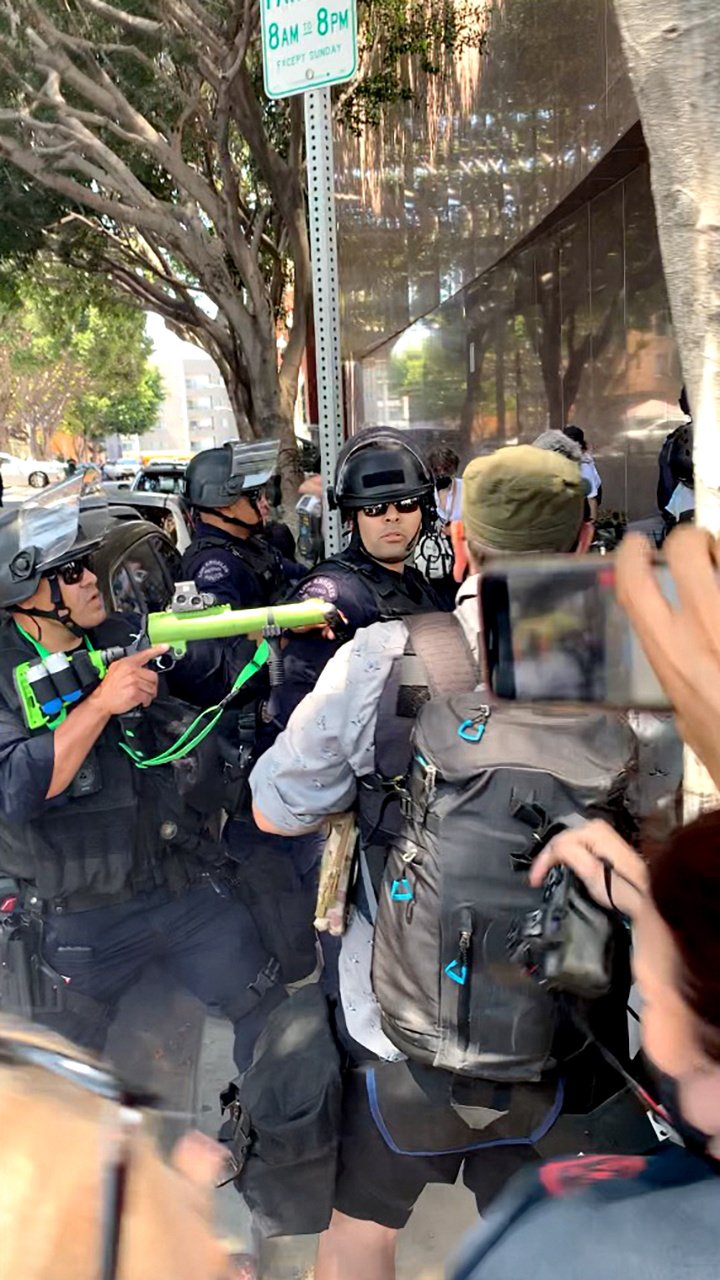 Los Angeles Police Department officers separate clashing demonstrations in the city on July 17, 2021. An officer struck independent videographer Vishal Singh with a baton during the Wi Spa protest, breaking his hand and damaging his camera phone.

Wi Spa, located in LA’s Koreatown, became a flashpoint for anti-transgender demonstrators as the result of a viral video which police are now treating as a hoax, Slate reported.

Singh told the U.S. Press Freedom Tracker he arrived at approximately 10 a.m. to cover what he expected to be another confrontation between anti-transgender demonstrators and pro-LGBTQ counterprotesters outside the spa. Demonstrations had been occuring at the site for days; Singh reported that a Los Angeles Police Department officer shoved him with a baton while he was covering protests there on July 3.

Shortly before 11 a.m., the two groups were about to clash at an intersection a block away from the spa, Singh said, when LAPD officers quickly advanced in order to separate the sides.

“At that point I decided to go down Coronado Street and kind of go around the police barricade and go to the sidewalk and film the far-right side of the protest,” Singh said. Singh said he was a few steps behind a couple of other journalists who were walking the same direction, but an LAPD officer stopped him when he was about halfway across the street and pushed him back, ordering Singh to get on the sidewalk.

“He was basically saying, ‘Get back to the sidewalk.’ I said, ‘Are you serious?’ And he responded, ‘Yes I’m serious, this is our street,’” Singh said.

Within seconds of getting on the sidewalk, Singh said, a group of officers began confronting the pro-LGBTQ counterprotesters. In footage of the incident Singh shared on Twitter later that day, he can be seen on the right-hand side wearing a helmet and tie-dyed shirt.

“I started stepping backwards and I turned my camera to film the side-view shot of the protesters getting brutalized and at that point [the officer] leaned over, stepped forward toward me and with both hands on his baton like a baseball bat hit my outstretched hand that was holding my camera as hard as he could,” Singh said.

Sorry for the stop in coverage. Hand was injured and phone was damaged after @LAPDHQ batoned my hand. Here’s the video from @Exile_in_LA of the assault. pic.twitter.com/LKgG6YKw8y

“My hand immediately fractured around the joints of my ring finger and my pinky finger and my camera phone fell down and was smashed,” Singh said.

Singh told the Tracker the screen of his phone screen was cracked from the fall, the case had been knocked off and it lost all cellular service for days following the incident until he was able to have it repaired. He said he also had to repeatedly turn his phone on and off before he was able to resume filming that day.

“I kept covering the protest right up to when the kettling started,” Singh said. “At that point I was like, ‘OK, I don’t need to get arrested.’ So I left the area and decompressed a little bit and then went to urgent care.” 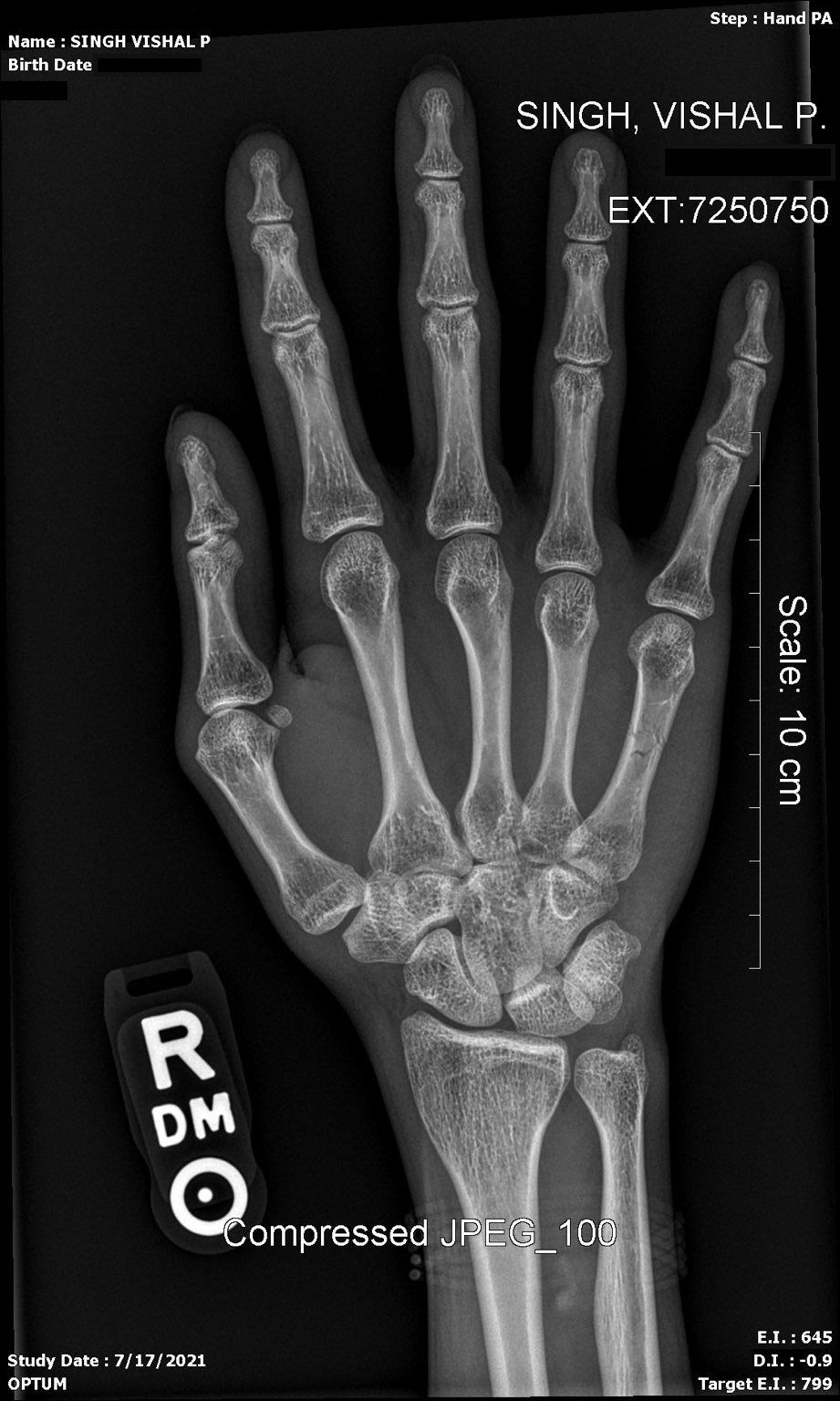 An X-ray taken of independent videographer Vishal Singh's right hand after an LAPD officer struck him with a baton shows a fracture to the metacarpal of his little finger.

After being directed to a hand specialist, Singh said, he was told he had a significant fracture in his hand and that in addition to six weeks of recovery he would also likely need physical therapy.

The Los Angeles Police Department did not respond to an emailed request for comment.

Vishal Singh, a videographer who works on Netflix documentaries and has been covering demonstrations in Los Angeles since May 2020, said he was punched multiple times while documenting protests at a restaurant in Los Angeles, California, on July 29, 2021.Local digital outlet WeHoTimes reported that the West Hollywood restaurant Harlowe had become a target of anti-vaccine protests because of its policy requiring proof of vaccination or a negative COVID-19 test to enter the premises. Similar stipulations have been put in …

Documentary writer, director and producer Rocky Romano was shoved and sprayed with bear mace and his camera was knocked from his hands while he was covering anti-mask protests in Los Angeles, California, on July 22, 2021.Romano told the U.S. Press Freedom Tracker he was covering demonstrations outside the Cedars-Sinai Breast Health Services Building in West Hollywood, where demonstrators had gathered to protest the clinic’s requirement that patients wear masks indoors. Similar rules have been put in place across the country …
More related incidents