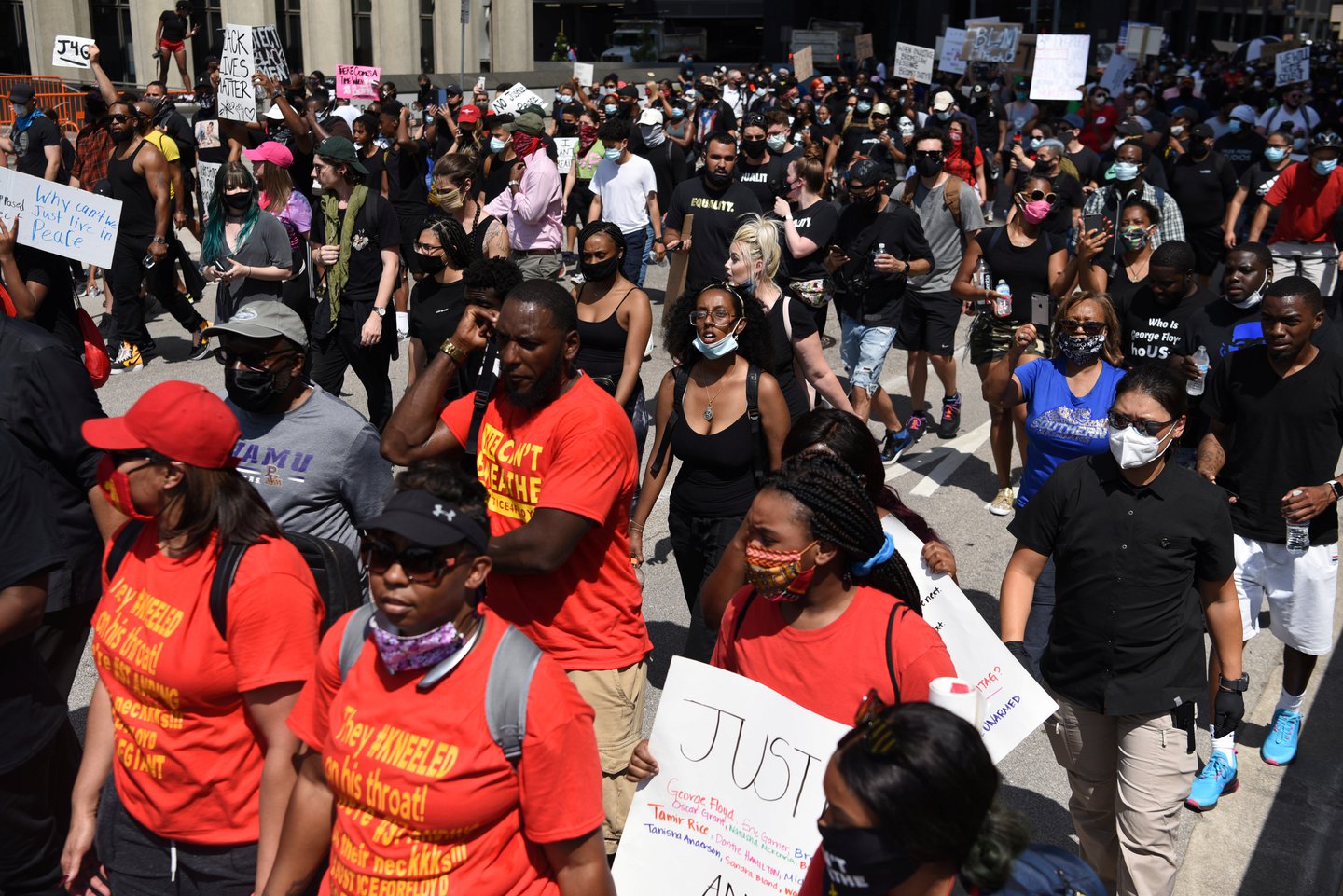 Protesters march at a rally for George Floyd on June 2, 2020, in Houston, Texas.

Derrick Broze, co-host of Free Thinker Radio on 90.1 KPFT and a freelance reporter, was arrested in downtown Houston, Texas, while documenting protests on June 2, 2020, according to his and other news accounts of events.

Protests in Houston were held in response to the death of George Floyd, a Black man, during an arrest in Minneapolis, Minnesota, on May 25. Floyd grew up in Houston’s Third Ward and lived in Texas until around 2014, Texas Monthly magazine reported.

In a video posted to Facebook, Broze narrates that protesters were near the intersection of McKinney Street and Avenida De Las Americas when some individuals began throwing bottles at a dense line of advancing officers.

A few minutes later, Broze can be heard saying, “They’re coming on both sides, they’re closing us in.”

In an account written for The Last American Vagabond, Broze said that he had been documenting the protests for approximately five hours before police declared the demonstration an unlawful assembly.

“The police – dressed in riot gear and armed with live ammunition – surrounded the protesters, medics, and yours truly using a tactic known as ‘kettling,’” Broze wrote. The U.S. Press Freedom Tracker has documented the arrests and assaults of other journalists within kettles here.

Houston police officers surrounded the group of around 50 protesters and began “violently rushing into the crowd and grabbing people,” according to Broze’s account.

“During the chaos I told several officers I was press documenting the situation,” he wrote. “I was told over and over that I should take it up with the courts.”

In Broze’s footage, he can be heard identifying himself as a member of the press multiple times and asking whether he can be released from the kettle or speak to a public information officer.

Broze added that he was charged with “obstructing a highway/passageway.”

breaking the law. However, me and the other 2 dozen people I was kidnapped with were kettled in by the police as they violently snatched protesters, throwing some to the ground, including me. I was charged with "obstructing a highway/passageway" for being on the sidewalk.

In his account of the incident, Broze wrote that he was taken to Harris County Jail and held there for 16 hours.

The Houston Police Department did not respond to a voicemail requesting comment.

Broze wrote, “As a journalist (and an opponent of police violence) I will continue to document the George Floyd protests and other important movements in the United States.”

The Harris County District Attorney’s Office dismissed nearly 800 charges on June 9 against individuals at demonstrations “in the interest of justice,” the Houston Chronicle reported. The DA’s office did not respond to a request to verify that the arrest charges against Broze were among those dropped.

The Tracker is documenting several hundred incidents of journalists assaulted, arrested, struck by crowd control ammunition or tear gas or had their equipment damaged while covering protests across the country. Find these incidents here.

Student journalist Emily Holshouser was one of at least four journalists detained while covering election-related protests in support of the Black Lives Matter movement in Los Angeles, California, on Nov. 4, 2020.Holshouser, who writes for California State University Northridge’s student publication The Daily Sundial, tweeted that she was covering a protest scheduled to begin at 6 p.m. outside City Hall in downtown L.A.When the event dispersed at 6:30 p.m., Holshouser followed a small group of remaining demonstrators as they walked …
More related incidents