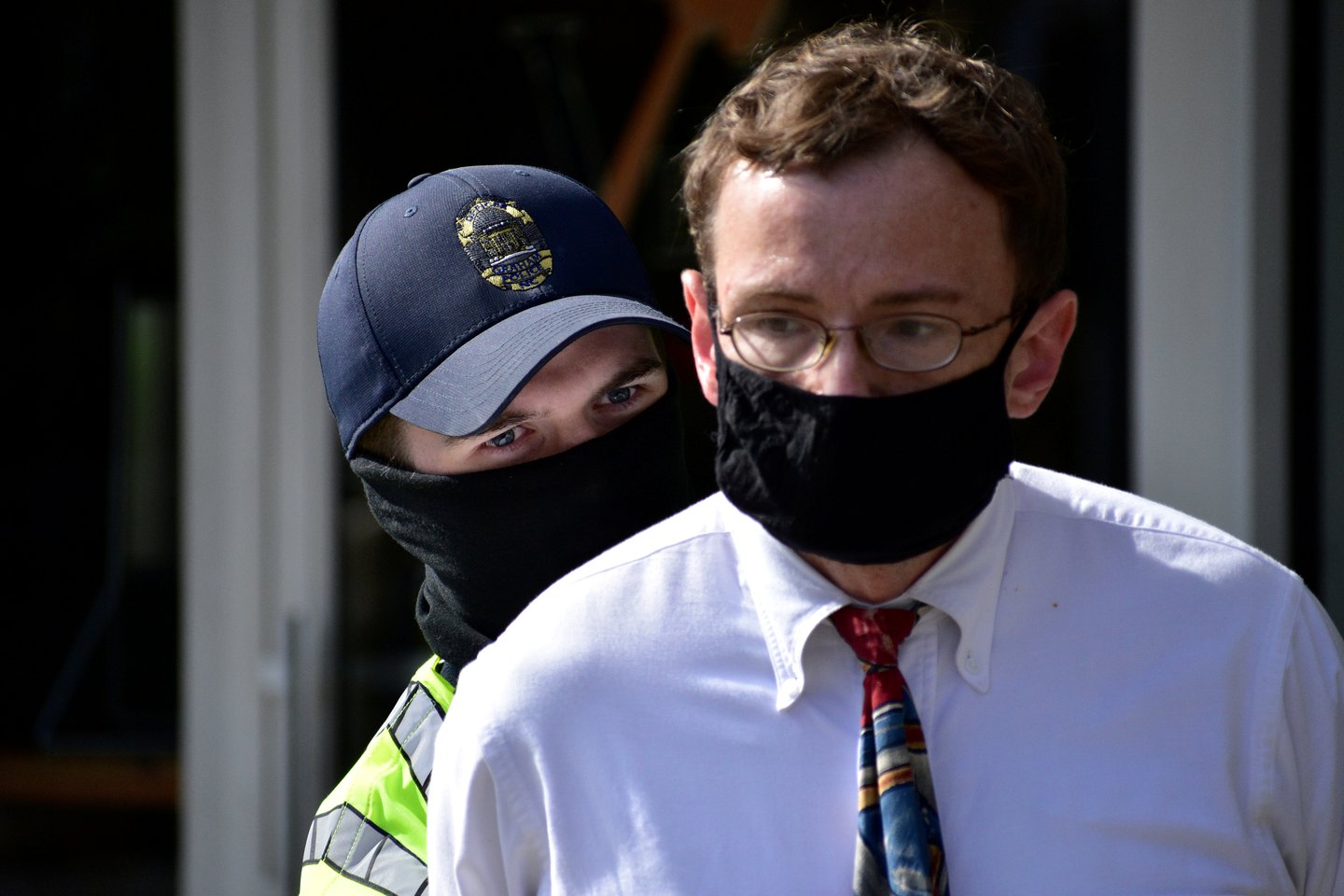 While covering a march to the polls in Graham, North Carolina, Alamance News reporter Tomas Murawski was arrested by a Graham police officer on Oct. 31, 2020.

Tomas Murawski, a reporter for The Alamance News, was arrested while covering a march to the polls in Graham, North Carolina, on Oct. 31, 2020.

The “I Am Change” march and rally was organized to encourage people to vote in the 2020 general election and included calls for accountability echoing recent protests against racial injustice. The News & Observer reported that approximately 200 demonstrators marched from the Wayman Chapel AME Church to Court Square, where the Alamance County Courthouse and a Confederate monument are located.

A police officer also grabbed the camera of News & Observer photojournalist Julia Wall to push her back while she filmed a march, which the Tracker documented here.

The Graham Police Department said in a statement that it issued multiple orders to relocate or disperse before using crowd control measures.

At least 12 individuals were arrested during the march, The News & Observer reported, including Murawski.

Alamance News Publisher Tom Boney Jr. told The News & Observer that Murawski was photographing the scene from the street when he was suddenly placed under arrest.

ALAMANCE NEWS REPORTER ARRESTED AMID THE PROTEST – Tomas Murawski, a staff writer for The Alamance News, was arrested at Saturday's protest. Murawski had taken a photo of the day's first arrest when he himself was arrested. See News & Observer video here: https://t.co/8L2P13QaZD pic.twitter.com/wYnLb8Ofug

“When I spoke to him on the street, while he was in police custody, he said they ordered them to move out of the roadway,” Boney said. “He was doing so, while still taking photos, but apparently not fast enough for [the police].”

In footage of the arrest published by The News & Observer, four officers can be seen taking Murawski’s camera and camera bag and leading him away from the crowd before placing him in handcuffs. Video from a second angle published by Triad City Beat shows that officers bent his left arm far behind his back and toward his head while leading him away, causing Murawski to double over.

Boney told the Tracker that Murawski was held in police custody for approximately three hours before he was released, and that all of his equipment was returned to him.

According to a Facebook post published by the Alamance News, Murawski was charged with resisting, delaying or obstructing a public officer — a Class 2 misdemeanor punishable by up to 60 days of community service, supervised probation or imprisonment.

Murawski has a hearing scheduled for Dec. 14, Boney told the Tracker, but they hope to have the charge dismissed before then.

Boney expressed his concerns over Murawski’s arrest in a statement to the newspaper: “Tomas has been an outstanding reporter and photographer for many years, and has always demonstrated a high standard of professionalism in all his work,” Boney said. “I cannot imagine that he did anything warranting his treatment at the Graham rally.”

The Graham Police Department immediately responded to requests for comment.

Editor’s Note: This article has been updated to include additional comment from Alamance News publisher Tom Boney Jr. and to reflect the reporting of an additional journalist affected by tear gas.

Student journalist Emily Holshouser was one of at least four journalists detained while covering election-related protests in support of the Black Lives Matter movement in Los Angeles, California, on Nov. 4, 2020.Holshouser, who writes for California State University Northridge’s student publication The Daily Sundial, tweeted that she was covering a protest scheduled to begin at 6 p.m. outside City Hall in downtown L.A.When the event dispersed at 6:30 p.m., Holshouser followed a small group of remaining demonstrators as they walked …
More related incidents