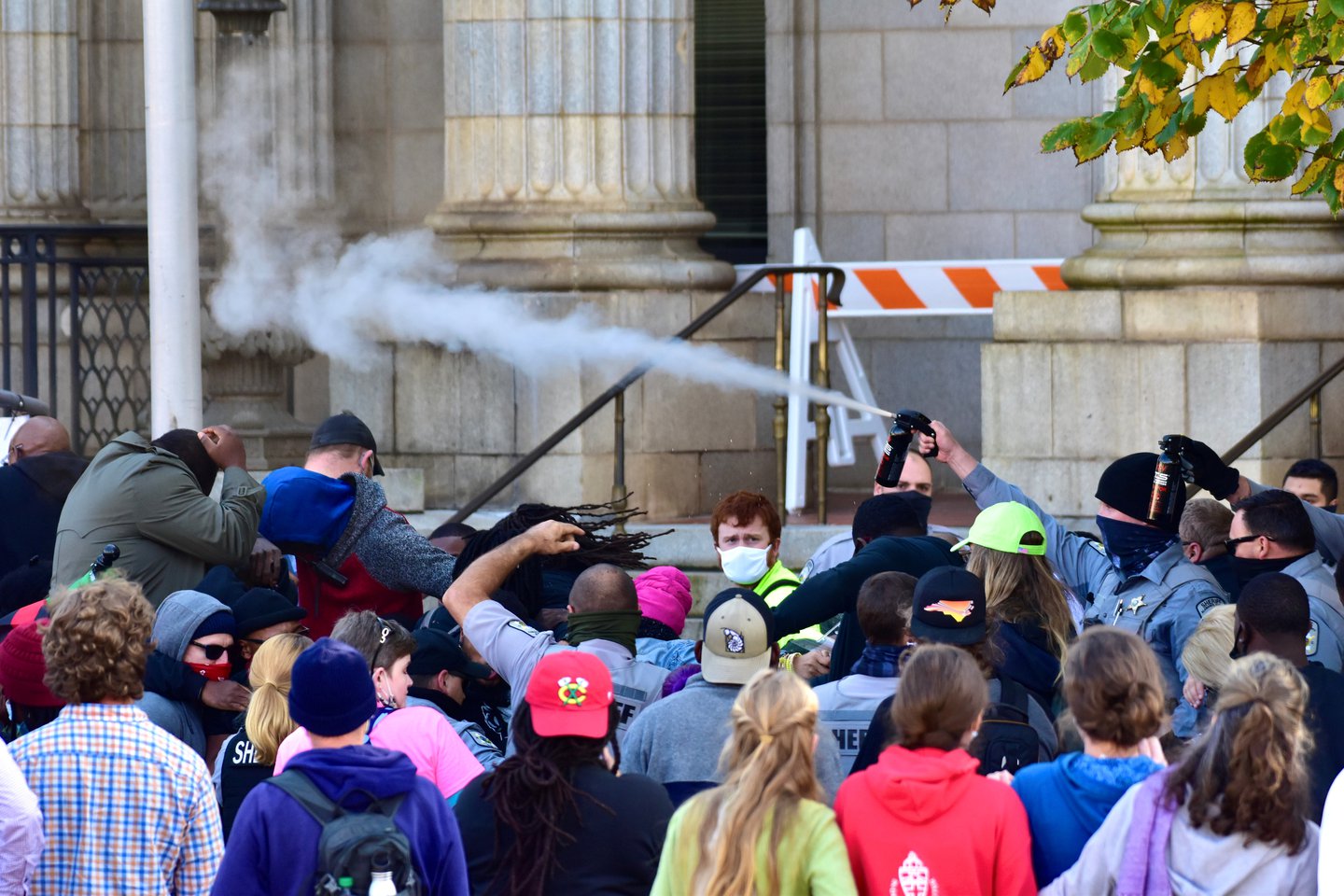 Law enforcement officers spray a chemical irritant into the crowd at a Get Out the Vote march on Oct. 31, 2020 in Graham, North Carolina.

At least 11 journalists were caught in pepper spray used to disperse a march to the polls in Graham, North Carolina, on Oct. 31, 2020.

The “I Am Change” march and rally was organized to encourage people to vote in the 2020 general election and included calls for accountability echoing recent protests against racial injustice. Demonstrators started at the Wayman Chapel AME Church at around 11:30 a.m., reported the Elon News Network, the student news organization for Elon University.

The crowd of approximately 200 people then marched to Court Square, where the Alamance County Courthouse and a Confederate monument are located, according to The News & Observer.

Video shows Graham police deploying pepper spray against protesters and a journalist (@jordangreentcb) after protesters kneeled in the street for 8 minutes and 46 seconds to honor George Floyd. pic.twitter.com/uF99Dly4Bv

Wall told the Tracker that Graham police officers ordered the marchers to clear the street shortly after noon, but that it was unclear where demonstrators needed to go and what to do once they got there.

“People were kind of milling about and not moving quickly enough for the Graham police,” Wall said, “and they started using pepper spray to get people to clear the road.”

The Graham Police Department said in a statement that it issued an order to clear the roadway and move onto courthouse property or to one of two areas designated by the department.

“When the crowd failed to disperse, after several verbal commands,” the statement continues, “[officers] utilized a crowd control measure that consisted of spraying a pepper based vapor onto the ground.”

Ian Blatutis, who is the mayor of neighboring Burlington and participated in and spoke at the event, told ENN that he didn’t know why police had used chemical irritants and that the five-minute warning to disperse was given after marchers had already been sprayed.

The spray — identifiable as OC (oleoresin capsicum) vapor from photos taken that day — is described by the manufacturer as “a high concentration of OC in a powerful mist inflaming the mucous membranes and exposed skin.”

Police arrested at least 12 individuals that day, including Alamance News reporter Tomas Murawski. A Graham police officer also grabbed Wall’s camera in order to push her back, which the Tracker has documented here.

According to the statement, once the crowd had moved to the designated areas the rally was “deemed unsafe and unlawful by unified command,” and protesters were given a five-minute dispersal warning.

Wall told the Tracker that approximately an hour after the rally’s speeches had begun on the courthouse steps, the Sheriff’s Department claims its deputies saw a man with a gas can on the courthouse premises, a violation of their permit agreement. Deputies then moved in and began “taking things apart,” she said.

“That’s when people started to resist and push back on them because it was not clearly communicated what was happening and then more pepper spray came out,” Wall said. “Myself, my colleague [Brosseau] and several other journalists and tons of people who were present got hit with all the pepper spray.”

Officers then moved in and arrested those who refused to leave the courthouse steps and chased everyone else away from the area using the OC vapor, according to Wall. Wall and Triad City Beat senior editor Green were walking next to each other when an officer deliberately sprayed the vapor at their feet.

“I know that they knew Jordan was press — he’s there all the time,” Wall said. “We were standing next to each other, both with badges out, I had a camera pointing and he had his phone up.”

Editor’s Note: This article has been updated to include comment and additional information from Julia Wall.

George Floyd’s death in Minneapolis on May 25, 2020, ignited a sweeping assembly of protesters across the United States — and the globe — a staggering, monthslong outcry for police reform and racial justice. In many moments peaceful, in many others bracingly violent, journalists of all stripes took to documenting these demonstrations. At times, to do the job meant to expose oneself to the effects of riot-control agents, to face harassment from individuals or law enforcement officials, to fear for …