George Floyd’s death in Minneapolis on May 25, 2020, ignited a sweeping assembly of protesters across the United States — and the globe — a staggering, monthslong outcry for police reform and racial justice. In many moments peaceful, in many others bracingly violent, journalists of all stripes took to documenting these demonstrations. At times, to do the job meant to expose oneself to the effects of riot-control agents, to face harassment from individuals or law enforcement officials, to fear for your safety or have your reporting interrupted. Below is a geographically organized roundup of such examples from around the U.S. during November 2020, a notably fraught month backdropped by an election, rising COVID-19 cases, and an increasingly encumbered economy and workforce.

I was threatened with arrest because I stepped back to film from behind the police line instead of getting stuck in front of it. Officers are still pushing the crowd around. Currently at SW 5th and Washington. pic.twitter.com/jpQfInPV7b

Protesters just tried to break windows of Starbucks then began vandalizing ATM. We’re here to document this event but it’s clear they don’t want to be filmed. @fox12oregon pic.twitter.com/IuxaaRsimB 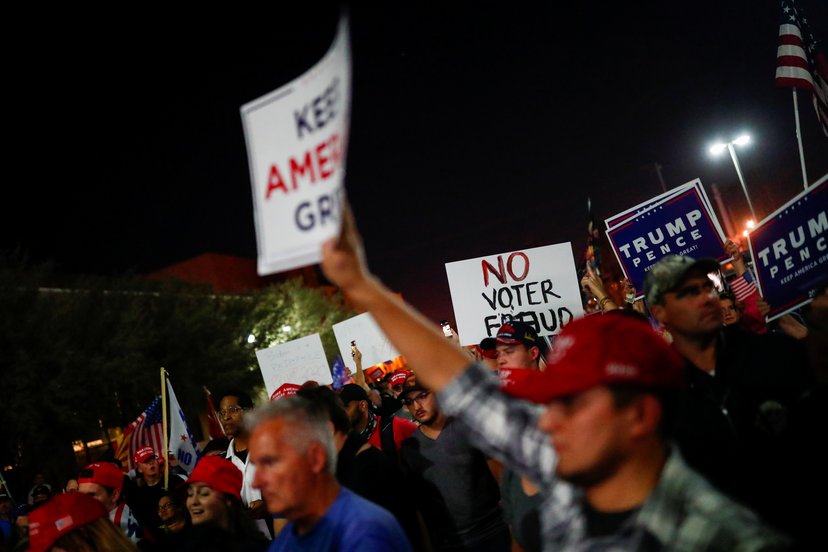 Supporters of President Donald Trump gather in front of the Maricopa County Tabulation and Election Center in Phoenix, Arizona, to protest about the early results of the 2020 presidential election on Nov. 4, 2020. (REUTERS/Edgard Garrido)

My photographer and I have left after one protester threatened us and said he would find where we live. We are filing a police report. https://t.co/mx9cr6MDq1

As I was filming with my press credentials clearly displayed, a mounted officer gave me a close-up. pic.twitter.com/OnKH7P8hIL

LAPD told video officer to zoom in on faces with cameras, including me, who they called “alleged press.” I offered to give them my @USPRESSCORPSORG verification number multiple times. They said they didn’t want it and threatened to arrest me. #eleccion2020 #FreedomOfThePress pic.twitter.com/jF3FbF2Fmz

In the shadow of the presidential election being called for Joe Biden that morning, about 200 people gathered at the Oregon Capitol in the afternoon for a “Stop the Steal” rally. Several journalists documented harassing, threatening interactions with pro-Trump supporters, which included members of the Proud Boys, among others, whose disdain and mistrust of the press was evident throughout the day.

@MichaelMinasi captured the moment I was singled out at the @realDonaldTrump #Austin protest and harassed yesterday for being a reporter. Another #Trump supporter told the guy to stop. The rest watched. pic.twitter.com/sqBHl1P9lm 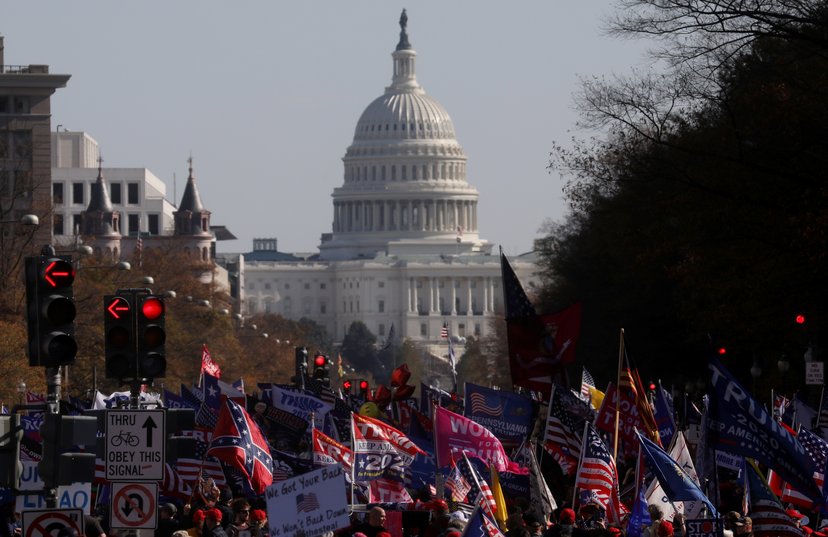 Demonstrators in support of Trump pass in front of the Capitol building in Washington, D.C. on Nov. 14, 2020. (REUTERS/Leah Millis)

Thousands gathered in the nation’s capital for an event dubbed the “Million MAGA March,” a rally and protest in support of Trump, who’d been disputing the election results and lobbing unsubstantiated claims of voter fraud. Far-right groups such as the Proud Boys, the militia group the Oath Keepers, and radio host and conspiracy theorist Alex Jones all attended the rally, according to reports. Violence would break out that evening, with some 20 people arrested on charges that included assault and weapons possession.

While reporting for the @CBSEveningNews we were surrounded by protestors and only our security could hold them back.

As this woman shouted #FakeNews through her megaphone the crowd began to grow.

I’ve never experienced this level of direct and instant vitriol from people before.

Distrust of the press turned into anger toward us.

They continued to hurl insults as we waited for them to move on.

Lot more to edit from today but I wanted to get this photo out from my coverage of the Proud Boys.

I was threatened by them twice but that's standard for my line of work - this is what scares me - and should scare you. We need real change in this country. pic.twitter.com/pUhPdnu1u5

Hit w pepper spray by MDP. My eyes are killing me. pic.twitter.com/ObYBy41Jyx

@PDocumentarians flees a cloud of bear mace after a fight breaks out between #PatriotPrayer and #antifa in downtown #Portland tonight. pic.twitter.com/s4AIVL5X7t

Information in this roundup was gathered from published social media and news reports as well as interviews where noted. To read about additional incidents of aggression against the press during the election, go here.