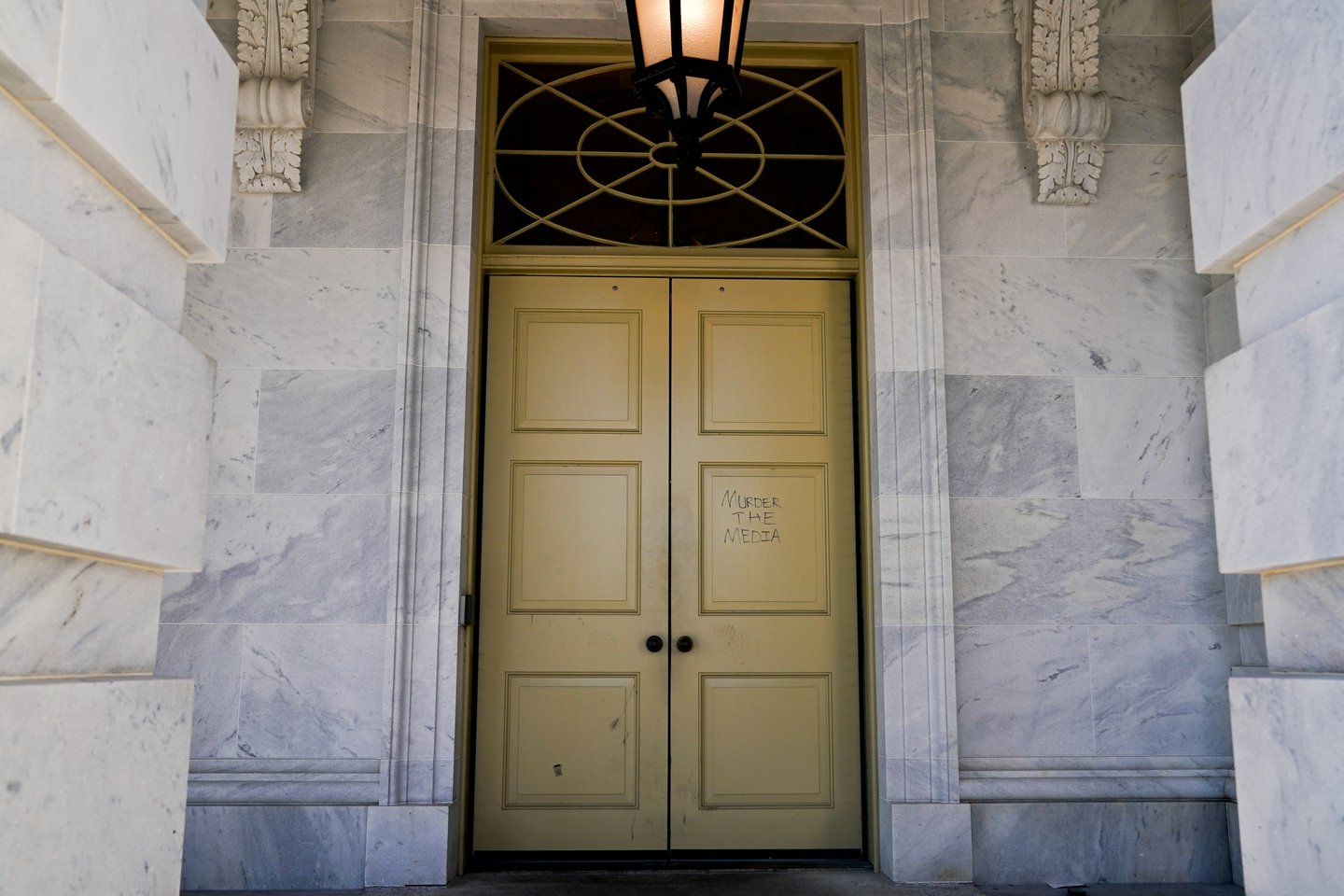 The phrase "Murder the Media" is seen carved into a door to the U.S. Capitol on Jan. 7, 2021, a day after supporters of U.S. President Donald Trump stormed the Capitol building in Washington, D.C.

January: Journalists harassed, threatened while reporting from D.C. riot and across the country

On Jan. 6, 2021, after a rally outside the White House in which President Donald Trump urged supporters to march down Pennsylvania Avenue to the U.S. Capitol — an ostensible protest of the Congress as it was set to confirm President-elect Joe Biden’s Electoral College victory — thousands stormed the legislative seat of the U.S. government. As the demonstration rapidly devolved into a full-on riot, individuals broke windows and forced open doors, vandalized and looted congressional offices, chanted for the demise of elected officials and assaulted members of the Capitol Police. Amid the fray, a potent disdain for journalists and journalism 0also simmered: Someone scrawled the words “Murder the Media” on a door to the building, and another tied a stolen camera cable into a noose and then hung it from a tree on the Capitol grounds. Below is a roundup of incidents involving individual journalists and news crews who faced harassment and threats in the course of their reporting on the day’s insurrection and across the month of January.

A full accounting of incidents in which members of the press were assaulted, arrested or had their equipment damaged while covering the riot can be found here. To learn more about how the U.S. Press Freedom Tracker documents and categorizes violations of press freedom, visit pressfreedomtracker.us.

CBC’s Katie Nicholson is trying to inform Canadians about what’s happening on the streets of DC & is swarmed & harassed & prevented from doing her job. Thinking of her & all the journalists working hard & putting themselves at risk today to cover this historic story. Stay safe. pic.twitter.com/9OK96ahs94

Ultimately the situation became unsafe when protestors tore down the metal barricades around the press and stormed in, shouting in our faces and in the cameras. We left and are safely in our DC office. But we will not stop covering this unprecedented moment in American history. pic.twitter.com/jZRhALpUhW

CBS News' Chip Reid reports from the chaos outside the Capitol: "There were no police around us. We were on our own. I remember one of the protesters standing next to me said, 'The police don't care about you guys. They're only protecting the senators. You're on your own, buddy'" pic.twitter.com/PYHZ4pdmNr

The Tracker received reports of journalists harassed while reporting from the Capitol the following day, Jan. 7.

Independent journalist Maranie Rae Staab, who has been covering protests in support of the Black Lives Matter movement in Portland, Oregon, tweeted that she witnessed a reporter for the Washington Post being harassed by a group in front of the east side of the Capitol. Staab wrote that after she began to film the men as they screamed at the Post reporter, they directed their attention at her. A man without a mask can be seen approaching Staab and stands inches away from her as he shouts, “Are you proud?” and “I will get right in your face. I do not care.” The man also accuses Staab and the Post reporter of being communists. After the maskless man walks away, another individual tells Staab that they — the press — are “rodents” and liars. A third individual can be heard telling another member of the press standing with them, “That [press] badge: Shove it up your ass.” Staab wrote, “These assaults are a direct threat to the healthy #democracy #America purports itself to be, threats that [are] quickly becoming normalized & expected.”

After I filmed these men screaming at a WashPost reporter they turned their attention to me.

These assaults are a direct threat to the healthy #democracy #America purports itself to be, threats that r quickly becoming normalized & expected.#freepress #uscapitol #thisisamerica pic.twitter.com/n9gFxR12fM

On Jan. 20, Inauguration Day, journalists reported being caught amid chemical irritants while covering demonstrations and harassed while reporting.

There were numerous gassings which included the use of CS, OC, and HC gas. My eyes immediately burned and my face was on fire. Multiple times I had to stop filming to run away from the gas which filled a city block. The first time gas was used, I started choking and threw up 3/ pic.twitter.com/dkxaAHEPHF

A flashbang hit a fence next to me and went off head level in the air next to me. My right ear still has minimal hearing. A snap next to it can be heard lightly and that's about it. Fuck these feds.

This is not OK - A minute before our live shot, a man drove by and threw a full beer bottle right at @TimMullican and me, screaming an obscenity. He missed us and we’re both safe, thankfully, but it’s upsetting that journalists are being attacked just for doing our jobs. pic.twitter.com/v0HoStSmFy

Information in this roundup was gathered from published social media and news reports as well as interviews where noted. To read about additional incidents of aggression against the press related to the 2020 election, go here. 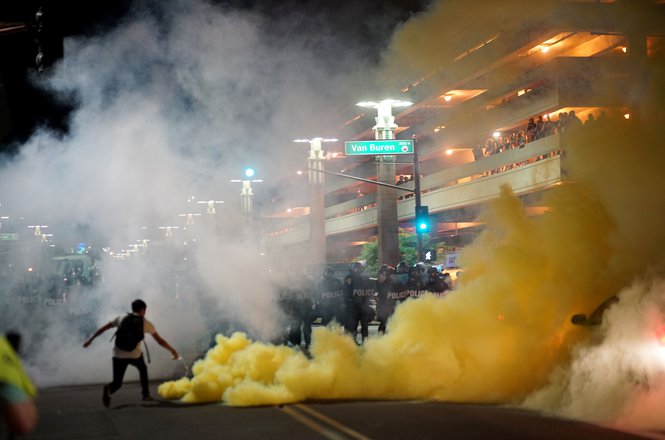 Reporters chased out of Washington D.C.’s Lafayette Park by officers in riot gear

Secret Service agents and U.S. Park Police chased two journalists out of Washington, D.C.’s Lafayette Park in the early morning hours of May 30, 2020, minutes after the journalists were caught in a cloud of pepper spray, video footage of the incident shows.At 3:22 a.m, officers in riot gear with the Secret Service and the U.S. Park Police sprayed pepper spray toward a crowd of protesters as they attempted to clear the park across from the White House, according to …
More related incidents