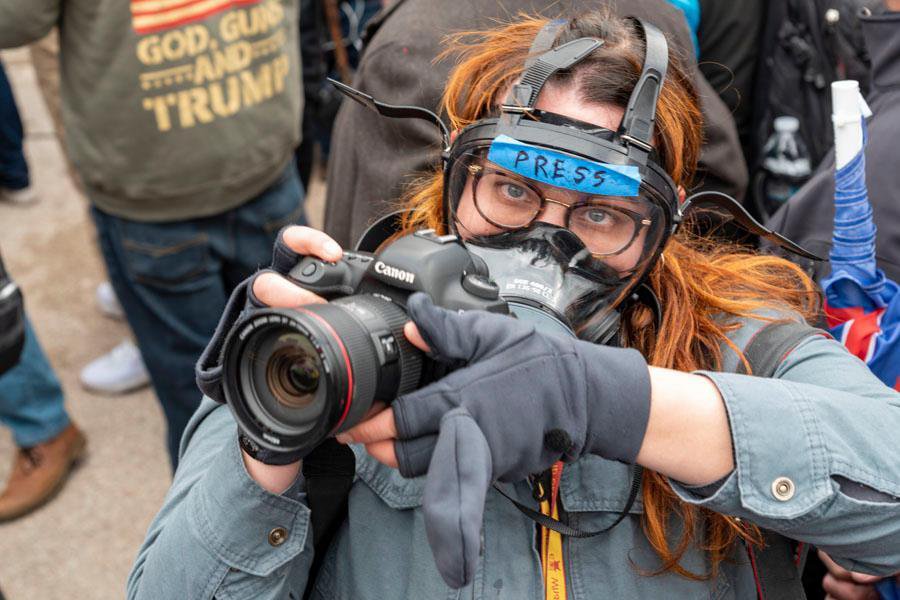 Photojournalist Amanda Andrade-Rhoades was hit with multiple crowd-control munitions while covering the Capitol riots for The Washington Post on Jan 6, 2021.

Freelance photojournalist Amanda Andrade-Rhoades said she was hit by crowd control munitions fired by law enforcement officers four times while covering riots at the Capitol in Washington, D.C., on Jan. 6, 2021.

Andrade-Rhoades told the U.S. Press Freedom Tracker she was on assignment for The Washington Post covering protesters as they marched toward the west side of the Capitol from the National Mall. The protesters, spurred by a speech by President Donald Trump earlier that day, aimed to disrupt the Congressional certification of President-elect Joe Biden’s victory.

At approximately 2:45 p.m., Andrade-Rhoades said she was photographing as the protest became a riot, with the pro-Trump crowd — some armed with clubs or other weapons — clashing with Capitol Police officers in front of the Capitol.

Andrade-Rhoades said she had covered previous pro-Trump demonstrations where protesters were far less aggressive towards law enforcement. “This time [the rioters] were fighting the officers and breaking apart barricades to hit the police with,” she said. “I had just put on my gas mask because things seemed to be getting very much worse.”

Andrade-Rhoades said her right leg was struck multiple times as she documented Capitol Police and rioters scuffling over a barrier.

“There was a bit of a gap between the police and the rioters, and that’s when I felt myself get hit four times,” Andrade-Rhoades said. She added that she believes she was hit by rubber bullets based on the rounds she saw on the ground around her after she was struck.

After the incident, she posted a photo of her leg showing several large bruises. “Since someone asked,” she wrote on her Twitter account, “I’m pretty sure these were rubber bullets but not 100% sure.”

Since someone asked, I’m pretty sure these were rubber bullets but not 100% sure. The one on the top of my thigh is very swollen, but it looks worse than it feels. That may not be the case tomorrow though ¯\_(ツ)_/¯ pic.twitter.com/kWJerA3pOV

Andrade-Rhoades said she was wearing a press credential issued by The Post, and the word “PRESS” was written on a piece of painters’ tape stuck to her gas mask. But she noted that when she was hit, law enforcement officers were overwhelmed by the number of violent rioters and were fighting back indiscriminately. She said she retreated from the violence briefly, then returned to photographing as the rioters climbed up scaffolding and stormed the Capitol.

About two days after the incident Andrade-Rhoades said some of her wounds were still swollen and tender to the touch and that she would seek medical attention if the swelling on her hip did not go down soon.

Andrade-Rhoades said that over the course of the afternoon, multiple rioters threatened to kill her, and that she was caught in pepper spray fired indiscriminately by police. The Tracker has documented all election-related incidents here.

Neither the Capitol Police nor the Metropolitan Police Department of D.C. responded to emails requesting comment.

A Fox 5 DC news crew was harassed and a cameraman assaulted by rioters while covering the insurrection in and around the U.S. Capitol on Jan. 6, 2021.Trump spoke at noon at a rally in front of the White House in response to the Congressional certification of President-elect Joe Biden, promoting false claims of election fraud and calling for his supporters to march to the Capitol, The New York Times reported. Following the rally, thousands of pro-Trump supporters waving Confederate …