Vincent Jolly, a reporter for the weekly magazine of French newspaper Le Figaro, had his phone destroyed during a live report about the riots at the Capitol in Washington, D.C., on Jan. 6, 2021.

Protests organized around Congress’s confirmation of President-elect Joe Biden’s victory devolved into a riot earlier that day, Reuters reported. At a rally in front of the White House, President Donald Trump called on his supporters to protest the vote on the basis of unfounded claims of election fraud. Hoards of his supporters then marched to the Capitol, swarmed the building and broke inside.

In a clip posted to Twitter by Figaro Live Editor in Chief Vincent Roux, Jolly can be heard at the very beginning giving a live report on the riot at the Capitol while filming a crowd of individuals walking away from the building. Jolly tells the host that they were waiting to hear responses to the violence from the Republican Party and Biden.

In Jolly’s video, a man is seen breaking away from the group, quickly advancing on Jolly and swiping at his cell phone before the feed suddenly dies. The Figaro Live host, seen to the left of the cell phone image, picks up the narration as the man advances, exclaiming that they would see what had happened to Jolly and that it appeared someone had taken the journalist’s phone.

In the tweet, Figaro Live editor Roux wrote that while Jolly was not injured in the assault, his cell phone was “completely destroyed.” “Shame!” he wrote. 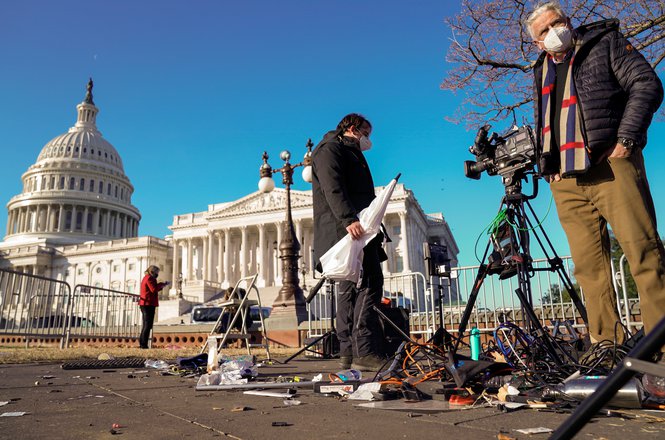 Broadcast equipment belonging to German public-service broadcaster ZDF and worth approximately 30,000 euros was reportedly destroyed as rioters swarmed a …