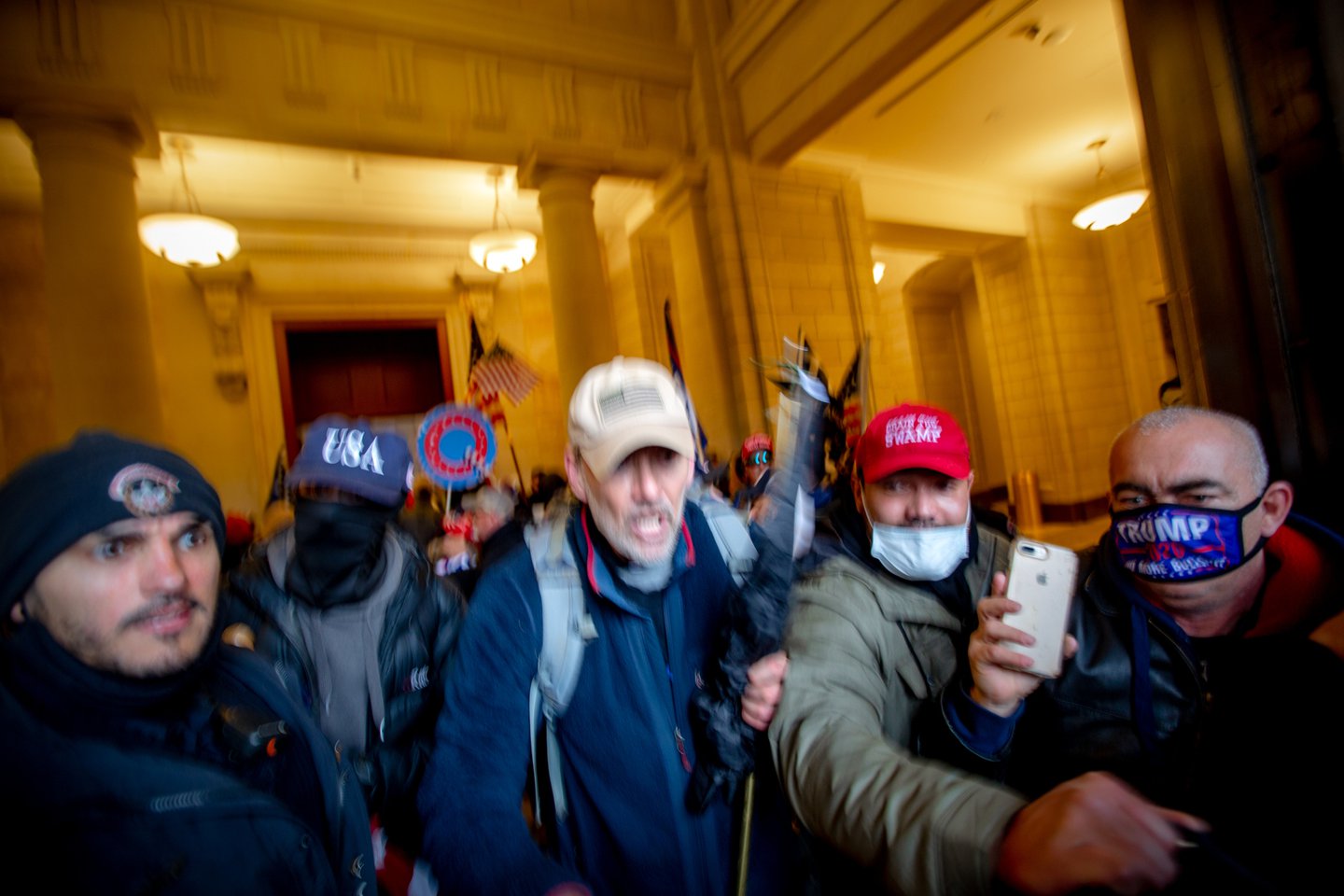 Slate reporter Aymann Ismail captured this image as a Capitol Police officer pushed him in an effort to block rioters who had made their way into the Capitol on Jan. 6, 2021. Ismail said he had identified himself as press to the group of officers.

Slate reporter Aymann Ismail was pushed by a Capitol Police officer while covering the riot at the Capitol in Washington, D.C., on Jan. 6, 2021.

In an account for Slate, Ismail wrote that he had started the day covering a rally in front of the White House at which President Donald Trump spoke at noon. After the president called on his supporters to protest Congress as it confirmed President-elect Joe Biden’s Electoral College victory on the basis of unfounded claims of election fraud, a crowd of hundreds marched to the Capitol, swarmed the building and broke inside, Reuters reported.

Ismail wrote that he’d followed the crowd as they marched across the National Mall, approaching the Capitol from the west.

“As we got closer, though, I saw these marchers ripping open doors and climbing through windows. When I got to the doors, police had managed to close them again,” Ismail wrote. “There was a core group of young people at the very front, just outside, trying to force their way in.”

In Ismail’s estimation, “there were a few cops, but not nearly enough” as he walked up to the doors and identified himself to officers as a member of the press.

“One cop started using my body to push people behind me backward,” Ismail wrote. “I heard one say to the other, ‘The best we can do is slow them down.’”

Ismail was able to quickly get around the officers and into the Capitol without further incident. He told the U.S. Press Freedom Tracker he didn’t believe the officers had acted maliciously or had been trying to harm him.

The Capitol Police did not respond to an emailed request for comment.

“I moved quickly, got as many photos as I could muster in a short period of time, then moved back out of the building,” Ismail said. “Earlier, I had seen other reporters get attacked by the mob, so I made it a point not to stick around in any one spot too long.”

The Tracker is documenting multiple incidents involving journalists, including assaults, arrests and equipment damage, from Jan. 6. All of our election-related coverage can be found here.

A Fox 5 DC news crew was harassed and a cameraman assaulted by rioters while covering the insurrection in and around the U.S. Capitol on Jan. 6, 2021.Trump spoke at noon at a rally in front of the White House in response to the Congressional certification of President-elect Joe Biden, promoting false claims of election fraud and calling for his supporters to march to the Capitol, The New York Times reported. Following the rally, thousands of pro-Trump supporters waving Confederate …