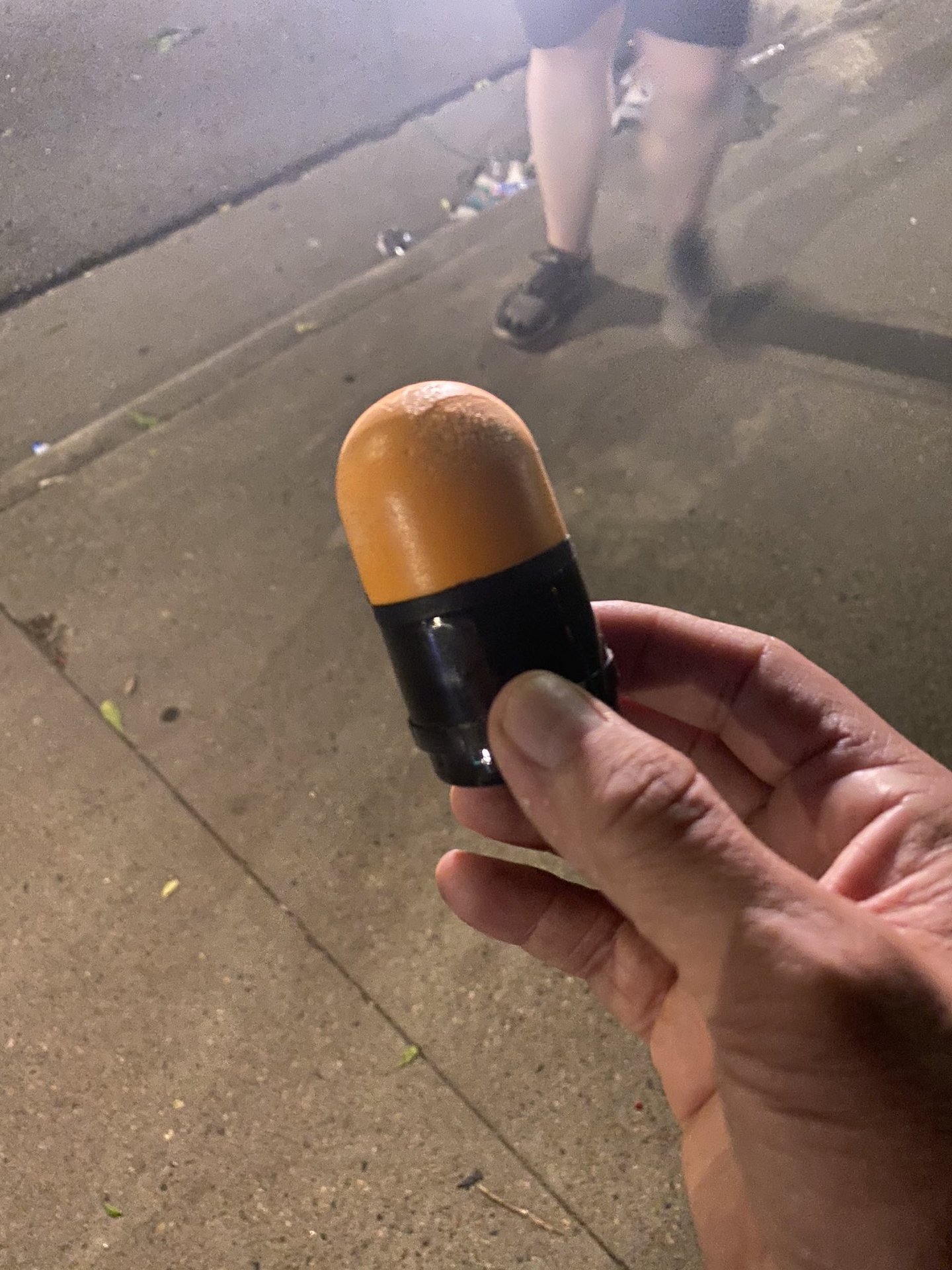 Jeremy Jojola posted on Twitter that he was fired upon with an object like this. "I was clearly with a photographer just after I went live with a large camera and light."

An investigative reporter for 9News KUSA covering protests outside the state capitol in Denver, Colorado, was hit by a non-lethal round just after completing a live shot on the 10 p.m. news on May 30, 2020.

Jeremy Jojola, who works for Denver’s NBC affiliate, told the Committee to Protect Journalists he was wearing a 9News hat and standing next to his photographer down the hill from the state capitol after completing his live stand up when the incident occurred.

He then walked with photographer Austyn Knox up the hill towards the capitol, shouting “media coming through” and came upon a group of about 15 members of Colorado State Patrol, responsible for policing the state capitol, Jojola told CPJ. He asked to speak to a supervisor, and was able to speak with an officer he had previously interviewed. The officer, according to Jojola, said, “I made the call to fire upon you guys, you didn’t look like media.”

Jojola said he accepted him at his word and left, but on his way down, marveled at how well-lit the area he had been standing was. “I feel that they should have known we were press. We were [just] live on TV,” Jojola told CPJ.

Jojola tweeted out a photo of an orange, nonlethal round that he found in the area he was standing when he was hit.

I went back to where I was hit and found this. This may or may not be the round that hit me. But it’s right where I was standing. I’m clearly with a photographer and wearing a 9NEWS hat. pic.twitter.com/42BC8jrxLz

Sergeant Blake White, a public affairs officer for the Colorado State Patrol, said in an email to the U.S. Press Freedom Tracker that the incident occurred while officers were trying to clear the area of protestors.

“There was a male, who was later identified as a member of the media, not responding to commands to clear the area,” he wrote in an email. “The male appeared to be rummaging through things, facing away, and wearing a backpack. There were no clear indications the male was a member of the media. A second male was next to him as well with no press markings either. One foam round was fired to gain compliance and struck the first male in the backpack.”

“[The supervisor] explained to the reporter there was no indication he was with the media and that the camera was not visible and was apologetic,” White wrote.

“We do not and will not target members of the media for capturing what is going on in the state and around the country, and we respect and believe in the freedom of the press,” White concluded.

Jojola told the Tracker via text that he did not hear any warning from the officers, and the shot was fired a minute and 30 seconds after he went off the air.

“These officers, if they were observant, would have seen me and a photographer. I was also standing in a lighted area.” He said the supervisor offered him an explanation, but did not apologize. He added that he is filing a records request for the Colorado State Patrol’s “less than lethal deployment policy.”

Denver Post reporter Alex Burness was hit by a pepper ball and foam projectiles while covering protests in Denver, Colorado, …

Denver Post reporter aimed at with weapon amid protests

Denver Post reporter Alex Burness and a second reporter were aimed at with a crowd-control weapon by law enforcement while covering protests in Denver, Colorado, on the evening of May 31, 2020. The protests were sparked by a video showing a police officer kneeling on the neck of George Floyd, a Black man, for 7 minutes and 46 seconds during an arrest in Minneapolis on May 25. Floyd was pronounced dead at a local hospital. Earlier in the night, Burness …
More related incidents