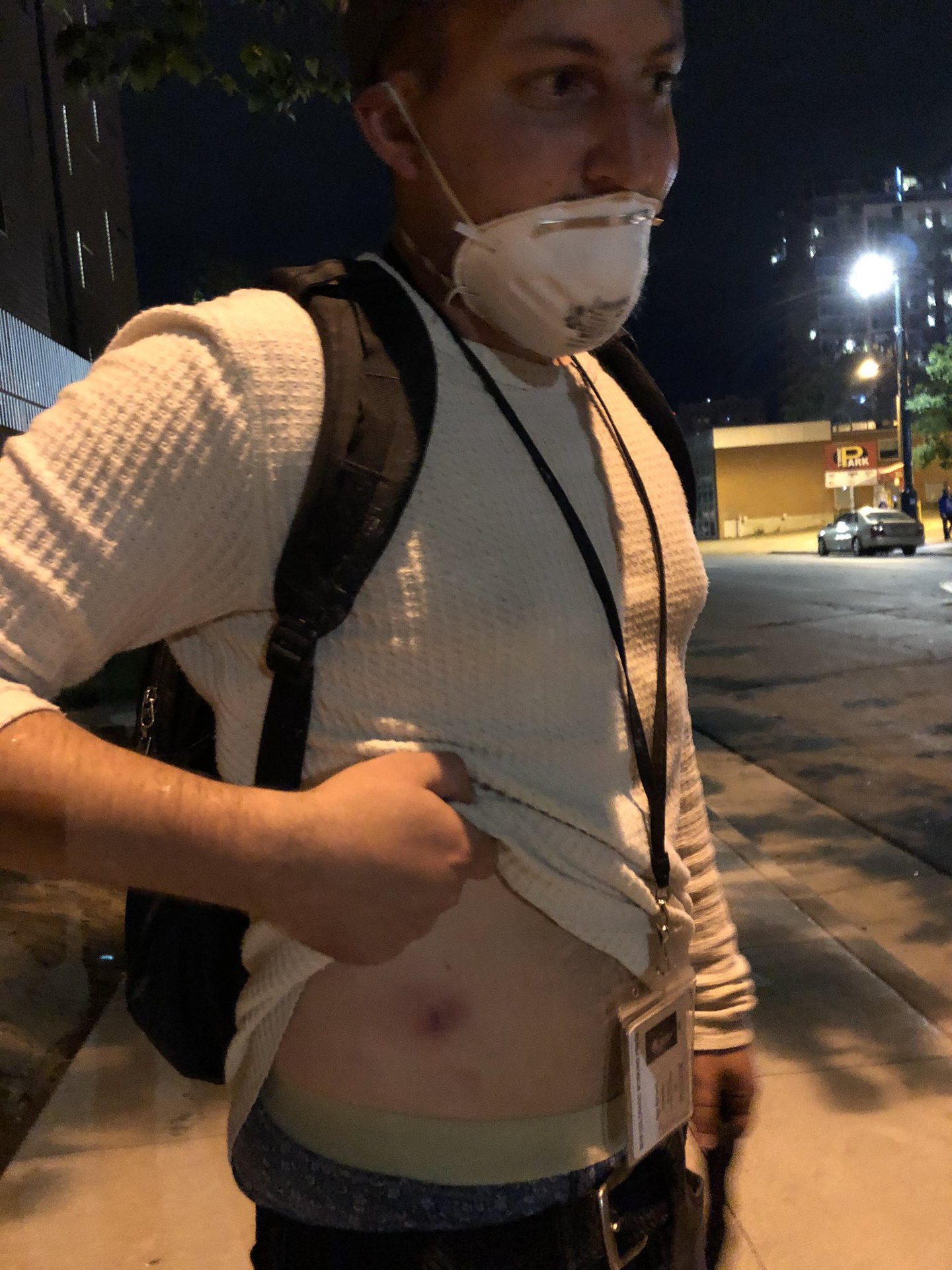 Denver Post reporter Alex Burness was hit by a pepper ball and foam projectiles while covering protests in downtown Denver on the evening of May 31, 2020. Later that night, a law enforcement officer trained a less-lethal rifle at Burness and Esteban Hernandez, a reporter for Denverite and Colorado Public Radio, after the two journalists had identified themselves as press.

The protests were sparked by a video showing a police officer kneeling on the neck of George Floyd, a black man, for eight minutes and 46 seconds during an arrest in Minneapolis on May 25. Floyd was pronounced dead at a local hospital.

At around 8:40 p.m., Burness was reporting on Denver’s Colfax Avenue when police deployed tear gas at protesters, a scene he described as “utter chaos.” He told the U.S. Press Freedom Tracker that he was hit in the back by a pepper ball. “I was wearing my press credentials but I would not say I was targeted,” he said.

Burness followed protesters as they moved toward the headquarters of the Denver Police Department. Shortly after 10 p.m., police clad in riot gear began firing projectiles into the crowd, Burness said. Burness ran away from the clash, shouting “Press!” He said he was hit four times by projectiles, once in the temple, twice in his side, and once in his upper thigh. He was left with two “very big welts” on his side, and a small bump on his head.

Burness, who does not believe he was being singled out when he was hit, posted about the attack on Twitter, calling it the “most violent single moment I’ve covered over these four days.”

Jack Healy, a New York Times reporter, posted a photo of Burness’s side with a newly forming bruise:

This is @alex_burness, Denver Post reporter. He screamed “Press” shortly before being hit as officers fired on protesters. pic.twitter.com/bE4a7kGIoq

After the incident, Burness ran into Hernandez, the Denverite and Colorado Public Radio reporter, near the state capitol building. The lights around the capitol were off, creating an “uneasy” atmosphere, Burness said. A large crowd of protesters had amassed on the north side of the building. Police moved toward protesters, firing tear gas. Burness and Hernandez decided to leave the area, heading away from the tear gas toward the capitol’s south side.

There, they encountered a line of officers standing across a two-lane street. Burness saw an opening that would have allowed them to leave the area without crossing the police line. “We shouted to them ‘Press!’ several times,” Burness said. Both had press credentials around their necks and Hernandez wore a neon yellow vest with ‘PRESS’ written on it in large letters. “One of the officers points that we have to head the other way, back towards where the tear gas is coming from.” Burness and Hernandez continued to shout “Press! Press! Press!” to get the officers to allow them to pass through the open area. But police refused. In a show of force, one lifted what Burness described as a rifle used to shoot less-lethal projectiles, and pointed it directly at the journalists.

“There is no doubt in my mind that those officers knew we were press. We were 40 feet away from the guy, we’re shouting press, he’s looking directly at us, he knows what’s up, he still did that,” Burness said, calling the incident “a flagrant disregard for our press rights.”

The two retreated back towards the capitol lawn, where they were engulfed in a cloud of tear gas. Burness, wearing ski goggles and an N95 mask, said he couldn’t see at more than five percent for several minutes. “It was very intense, extremely unpleasant, and crucially, totally unnecessary,” he said. Both Burness and Hernandez tweeted about the incident. Reached via direct message on Twitter, Hernandez declined to comment.

Burness said while he has lingering bruises from being hit, “I’m much more shaken up by how our rights were disregarded.”

“Even though there certainly has been much more interest on Twitter and from people who care about me about me being shot at with these foam bullets, the other incident to me, from a press freedom perspective, is significantly more troubling,” Burness said, referring to the officer who pointed the less-lethal rifle at the reporters. 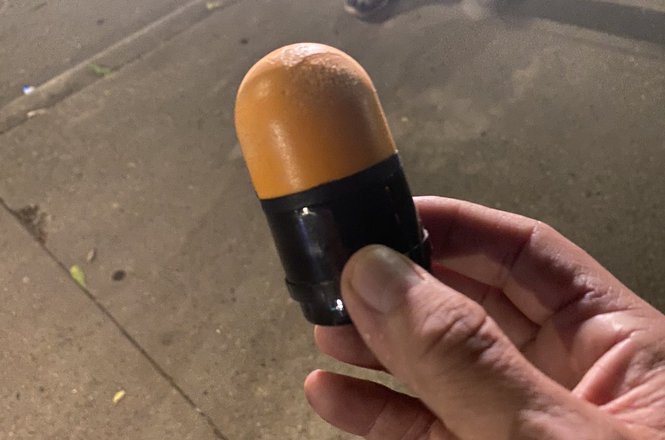 An investigative reporter for 9News KUSA covering protests outside the state capitol in Denver, Colorado, was hit by a non-lethal …

A journalist said he was shoved by a police officer while covering protests in Denver, Colorado, on May 30, 2020.The protests were sparked by a video showing a police officer kneeling on the neck of George Floyd, a black man, for 8 minutes and 46 seconds during an arrest on May 25. Floyd was pronounced dead at a local hospital.David Sachs, who reports for Denverite and Colorado Public Radio, said he was covering protests outside of the Colorado Supreme Court …
More related incidents