Journalist shoved by police while filming arrests in Ohio

Nick Swartsell, news editor for CityBeat Cincinnati, was shoved by officers while filming an arrest during protests in Cincinnati, Ohio, on May 31, 2020.

Shortly after 10 p.m. Swartsell was with a group of reporters who were attempting to document the mass arrest of people he believed to be protesters on Green Street in the neighborhood of Over-the-Rhine. Police officers refused to let the journalists get close enough to see what was happening and told them “You don’t need to see this,” Swartsell told the U.S. Press Freedom Tracker. On Twitter, he wrote that he was threatened with arrest if he argued further.

Hearing roughly 150 people being arrested on Green. I have not been allowed to get within a distance at which I can observe. Threatened w arrest if I argue further.

After moving a block away from the mass arrests, Swartsell said the journalists witnessed police officers near the intersection of Elm and Liberty streets arresting a woman on the street for violating curfew. The woman repeatedly asked the group of journalists to film her arrest. When the journalist began to film, a group of police officers started pushing them away with their shields and ordered them to leave immediately, Swartsell said.

In videos posted to Twitter of the incident, Swartsell, as well as the other journalists, can be heard yelling repeatedly “We’re press,” as the officers pushed into the group with their shields.

This woman asked her arrest be filmed. This is response we got. pic.twitter.com/VUeOqxsZQf

One officer in the video is then heard telling the journalists that their identification needs to be more prominently visible. In a tweet about the incident, Enquirer journalist Sarah Brookbank said she had her press badge in her hand.

“That was a little disturbing to me, we were not right up on them, obviously we weren’t trying to do anything other than film it and we weren’t close enough to disrupt anything and they still pushed us pretty far back,” said Swartsell.

The Tracker reached out to the Cincinnati Police Department for comment, but did not receive a reply.

The U.S. Press Freedom Tracker is documenting several hundred incidents of journalists assaulted, arrested, struck by crowd control ammunition or tear gas or had their equipment damaged while covering protests across the country. Find all of these cases here. 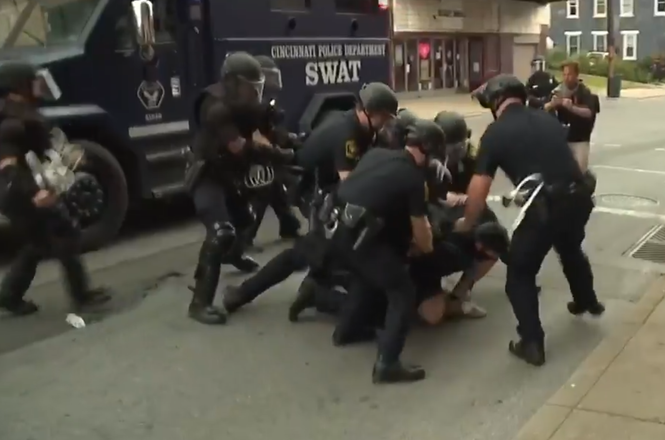 Journalist Nick Swartsell said police officers grabbed and pulled him by the bandana around his neck as he reported on protests in Cincinnati, Ohio, on June 1, 2020.The protests were held in response to a video showing a white police officer in Minneapolis, Minnesota, kneeling on the neck of George Floyd, a black man, during an arrest on May 25. Floyd was pronounced dead at a local hospital. Protests against police brutality and in support of the Black Lives Matter … 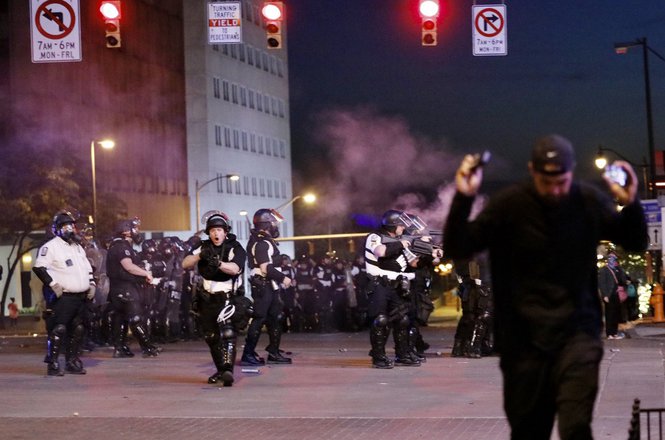 Adam Cairns, a staff photographer for the daily Columbus Dispatch, was hit with a projectile while covering protests in Columbus, …
More related incidents