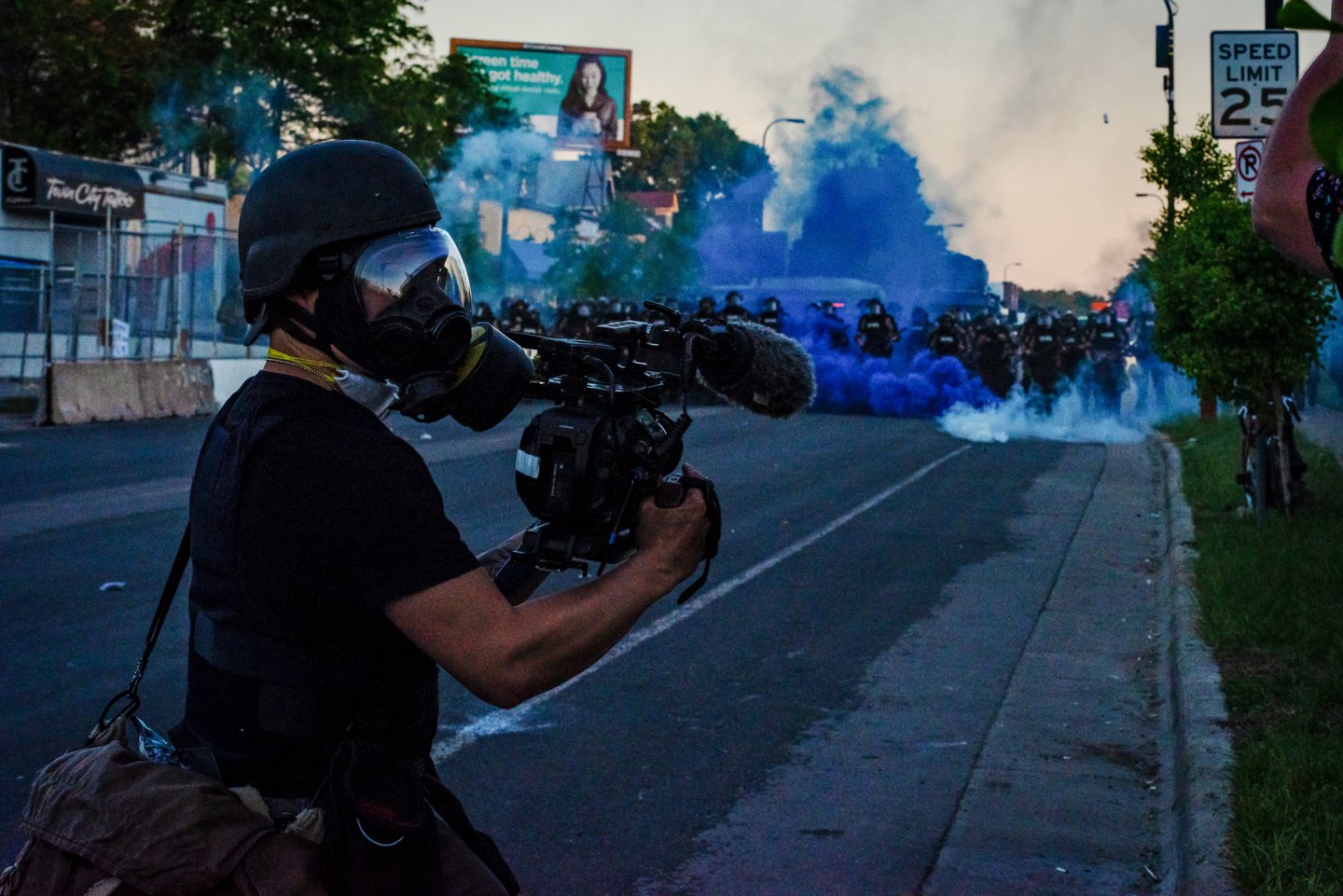 Freelance journalist Mike Shum looks back as a police line advances in Minneapolis’ Fifth Precinct shortly before police push him over a wall on May 30, 2020.

Police officers shoved, threatened and shot projectiles at two freelance journalists while they reported for the New York Times on protests in Minneapolis on May 30, 2020, according to interviews with the journalists and videos of the incidents.

Journalists Mike Shum and Katie G. Nelson told the U.S. Press Freedom Tracker that they were reporting in the Fifth Precinct of Minneapolis for the Times as an 8 p.m. curfew came into effect.

As seen in a video from local ABC affiliate KSTP, a line of state police formed to the south of the station on Nicollet Avenue. “Please disperse or you will be arrested,” a loudspeaker blares. Within seconds of the warning, the police appear to use flash bang grenades and tear gas. They then begin to advance.

The video shows a line of State Patrol troopers, in maroon pants and helmets, and what appear to be Department of Natural Resources conservation officers in green pants and helmets approaching a group of journalists huddled on the side of the street. As previously reported by the Tracker, State Patrol troopers pepper sprayed the group at close range as the journalists identified themselves as press.

Nelson and Shum had gas masks, but a third person working with them didn’t, Nelson said, so she escorted this person to safety as Shum stayed to film.

Shum and the other journalists fled from the advancing police. Several journalists attempted to turn west off Nicollet Avenue on West 31st Street, but found themselves trapped in an alcove on the corner of a building with no exit. They could either go back into the tear-gas clouded street or try to climb over a wall, Nelson said.

NBC journalist and producer Ed Ou filmed inside the alcove, his head bleeding from an unknown weapon or projectile and his vision blurred by tear gas and pepper spray, he told the Tracker.

Ou’s video shows several journalists climbing over the wall as Shum rounds the corner, several officers right behind him. The officers appear to be wearing green and tan DNR uniforms. As Shum attempts to scale the wall with his large camera, an officer pushes him from behind.

Shum said he heard the officer order him to “get the fuck out of here,” before shoving him. “I was pushed hard enough where I sort of lost control and fell on my shoulder and arm,” he said.

He added he rolled through the fall and suffered superficial injuries as he tried to protect his camera and body.

L.A. Times photographer Carolyn Cole wrote in an account of the incident that an officer also “lifted me up onto the wall and I fell to the other side.” Cole, who said she suffered cornea damage from the State Patrol pepper spraying her at close range, was helped to the hospital by local residents.

DNR spokesman Chris Niskanen said the department respects the freedom of the press but “disagrees with [the Tracker’s] characterization of events.” He didn’t specify why. Niskanen added he couldn’t comment further on the incident because it “may be subject to ongoing litigation initiated against the State of Minnesota by multiple media members.”

Nelson and Shum have joined a lawsuit seeking class-action status filed by the ACLU of Minnesota against Minneapolis and state officials concerning the treatment of journalists covering the Floyd protests.

The Department of Public Safety, which oversees the State Patrol, didn’t respond to the Tracker’s emailed list of questions. In a May 31 press conference, the Chief of the State Patrol, Col. Matt Langer, praised the law-enforcement effort during a dangerous and unpredictable night while also saying: “We are never perfect.”

Shum reunited with Nelson and they continued to report on the dispersal of protesters near the Fifth Precinct police station. About an hour later, the team was filming a couple of people approaching a police line with their hands up near a Kmart a few blocks from where Shum was shoved, Nelson said. A Minneapolis Police officer about fifty feet away pointed a projectile launcher at them, Nelson said.

Nelson said she yelled that they were press, adding there was no question they looked like journalists given their large cameras, ballistic helmets and protective vests.

In a video filmed shortly after that Nelson provided to the Tracker, Minneapolis police officers in a line start ordering people to move. Nelson can be heard warning Shum, “Mike, Mike, Mike, they’re gonna push us. Keep shooting Mike.”

Minneapolis police spokesman John Elder told the Tracker he couldn’t comment on the incident. He added that “every use of force by the MPD is under investigation internally.”

Late into the night, Nelson and Shum were driving a couple of blocks off Lake Street on their way to 38th and Chicago, where protesters had created a memorial on the site of Floyd’s killing.

Nelson turned the car onto a road blocked by a police checkpoint, the journalists told the Tracker. Nelson said the police shined a bright light at them. Blinded, she slowed the car down. Nelson said she yelled that they were press through the open windows of the car.

Nelson said the police yelled “Go home” and “We don’t care” in response.

Nelson pulled a U-turn and drove away as the journalists heard the pinging of projectiles hitting her car. They said they believe the car was hit with pepper balls.

At around the same time, unidentified law-enforcement officers fired projectiles at the car of a television crew for France’s TF1 and arrested them, the Tracker previously reported.

It isn’t clear which law enforcement agency fired the projectiles at Nelson’s car. Protesters, journalists and even law-enforcement officials have had difficulty at times identifying specific officers during the protests. More than a dozen different agencies joined the law-enforcement effort in Minnesota, often wearing similar looking uniforms.