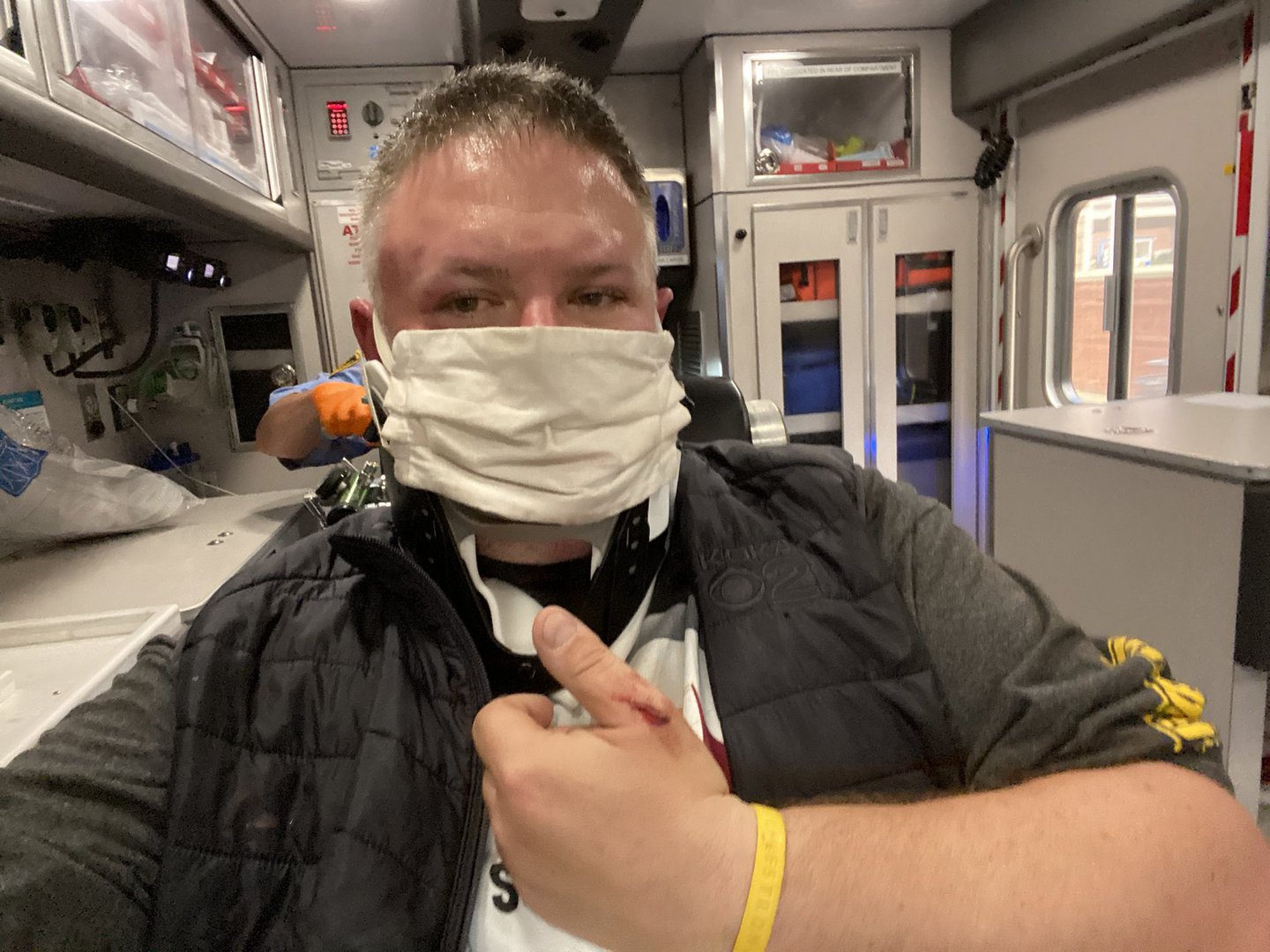 Photojournalist Ian Smith shows some of his wounds on Twitter after being attacked by protesters in Pittsburgh on May 30.

Ian Smith, a photojournalist for CBS News affiliate KDKA-TV, was attacked by protesters while covering unrest in Pittsburgh, Pennsylvania, on May 30, 2020.

Protests in Pittsburgh occurred as demonstrations that started in Minnesota on May 26 spread across the country. The protests were sparked by video showing a white police officer kneeling on the neck of George Floyd, a black man, during an arrest. Floyd was pronounced dead at the hospital.

Smith, who has worked for KDKA-TV for 15 years, told the U.S. Press Freedom Tracker that he was following groups of protesters near the PPG Paints Arena, a hockey arena, after an organized, peaceful demonstration ended.

He said he was near a police car that had been set on fire when multiple protesters yelled at him that he wasn’t allowed to film. As he started to move away to try to film from a different spot, he said he felt multiple people pull on his camera. After he lost his balance and fell to the ground, a group of people — he estimated between four and six — began punching and kicking him, while others were nearby. He said he heard them chant, “Kill him, kill him.”

Smith said his attackers took his camera and “smashed it into 1,000 pieces.”

Another group of protesters intervened, forming a wall around Smith to protect him, then helping him to outside the nearby arena where there was a medic, he said. Those demonstrators told him the attackers were not a part of their group. Smith said he found out later he was helped to a safer area by the CEO of the Pittsburgh Penguins, confirmed by the Pittsburgh Post-Gazette.

Smith was taken by ambulance to a hospital, evaluated and later released. He said he was struck several times in the head and sustained bruises and scrapes on his face, arms and legs.

I’m was attacked by protestors downtown by the arena. They stomped and kicked me. I’m bruised and bloody but alive. My camera was destroyed. Another group of protesters pulled me out and saved my life. Thank you! @KDKA pic.twitter.com/clyANKodth

KDKA-TV reporter Paul Martino, who was covering the protests with Smith, wrote in a Facebook post that demonstrators threatened him as he tried to approach Smith during the attack. He was hospitalized after the incident with severe chest pains.

A spokesperson for the Pittsburgh Police Department said police were aware of the incident, and said the department does not discuss ongoing investigations.

Smith said he was grateful to the people who had stepped in to protect him.

Freelance photojournalist Ed Thompson said he was assaulted and threatened with a firearm by an individual while covering a protest in Pittsburgh, Pennsylvania, on Sept. 22, 2020.Thompson was covering one of the many protests that broke out across the U.S. in 2020 in response to police violence and in support of the Black Lives Matter movement. The U.S. Press Freedom Tracker is documenting assaults, arrests and other incidents involving journalists covering protests across the country.On Sept. 22, protesters demonstrating against …

Bill O’Driscoll, a reporter for the local public-radio station 90.5 WESA, was struck by a projectile fired by police while covering protests in Pittsburgh on May 30, 2020.Protests that began in Minneapolis on May 26 had spread across the country, sparked by a video showing a police officer kneeling on the neck of George Floyd, a Black man, during an arrest the day before. Floyd was later pronounced dead at a hospital.O’Driscoll told the U.S. Press Freedom Tracker that May …

Following protests in western Philadelphia, TheBlaze reporter Elijah Schaffer was assaulted while filming looting inside a discount store on Oct. 27, 2020.Schaffer, who reports for TheBlaze, which was founded by conservative political commentator Glenn Beck and is a part of Blaze Media, was covering protests that broke out in response to the death of Walter Wallace Jr., a 27-year old Black man who was fatally shot one day earlier by two Philadelphia police officers.According to news reports, protests that had …

A reporter for nonprofit media outlet Unicorn Riot was hit repeatedly while he filmed protesters who said they were defending a statue of Christopher Columbus in Philadelphia, Pennsylvania, on June 14, 2020.The night before, on June 13, a group of vigilantes had gathered at South Philadelphia’s Marconi Plaza to defend its Columbus statue. Monuments of the Italian explorer and other figures across the country had been toppled or vandalized during continuing protests sparked by the May 25 police killing of …
More related incidents