NBC Bay Area reporter and anchor Terry McSweeney was handcuffed and temporarily detained by police while filming an arrest during a protest in Oakland, California, on June 2, 2020.

Protests in Oakland were held for several days in early June amid a national wave of demonstrations against racism and police brutality in response to the deaths of George Floyd, Breonna Taylor and other Black people at the hands of police.

McSweeney and an NBC Bay Area videographer were covering the demonstration as protesters started to march from City Hall to the Oakland Police Department, McSweeney told the U.S. Press Freedom Tracker. The videographer followed protesters on foot and McSweeney drove a station van up the street to meet him, he said.

As McSweeney turned onto 11th Street from Broadway, he came up behind a van that was stopped in the middle of the street, while police detained two people on the sidewalk next to the vehicle. McSweeney said he began recording the scene on his cell phone from inside the van.

McSweeney said an officer came up to the van — which was clearly marked as belonging to the NBC Bay Area news station — tapped on the hood, and told him to leave. McSweeney said he told the officer he was with the media, but the officer again directed McSweeney to leave and said he would be arrested if he didn’t. When McSweeney responded that he believed he had a right to be there, the officer told him to get out of the van.

The officer took McSweeney’s phone and put his wrists in handcuffs, McSweeney said.

The officer who detained him then asked another police officer to walk McSweeney up to a street corner about a block away, according to McSweeney.

McSweeney said he immediately called NBC Bay Area’s news director to alert his colleagues to the incident, and the news station has been in contact with the Oakland Police Department. He didn’t file an official complaint with the department about the incident.

Oakland Police Department Public Information Officer Johnna Watson told the Tracker the department was made aware of the incident shortly after it happened, and said it was a concern for the department and the relationship between police and journalists. She said the department reviewed the incident and communicated with McSweeney and newsroom supervisors at NBC Bay Area about it, and met with other media outlets in the region about media policies.

“We fully support the journalism and the reporting of journalists. It is really important for us to allow the access to ensure that our media is able to report on what is going on. We want to have that access and that reporting without any barriers,” Watson said.

Watson said the vehicle stop McSweeney came across was associated with the investigation into the shooting death of a federal agent in Oakland on May 29, and was considered a “high risk” situation. She said no officers were disciplined related to McSweeney’s detention, however, the department did go over media policy training with officers involved with protests after the incident.

McSweeney said he was skeptical about the police department’s comments that officers needed more training, noting that the department deals frequently with protest coverage.

“There was no misunderstanding whatsoever,” McSweeney said. “I told him exactly who I was, who I was with, he knew who I was with and he understood that. And he detained me anyway and took me away from the scene.” 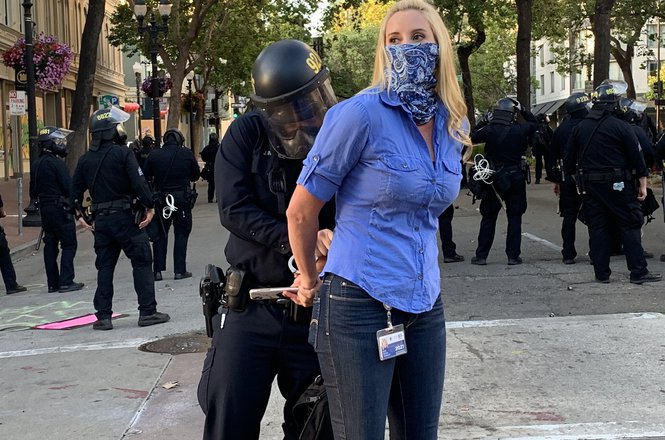