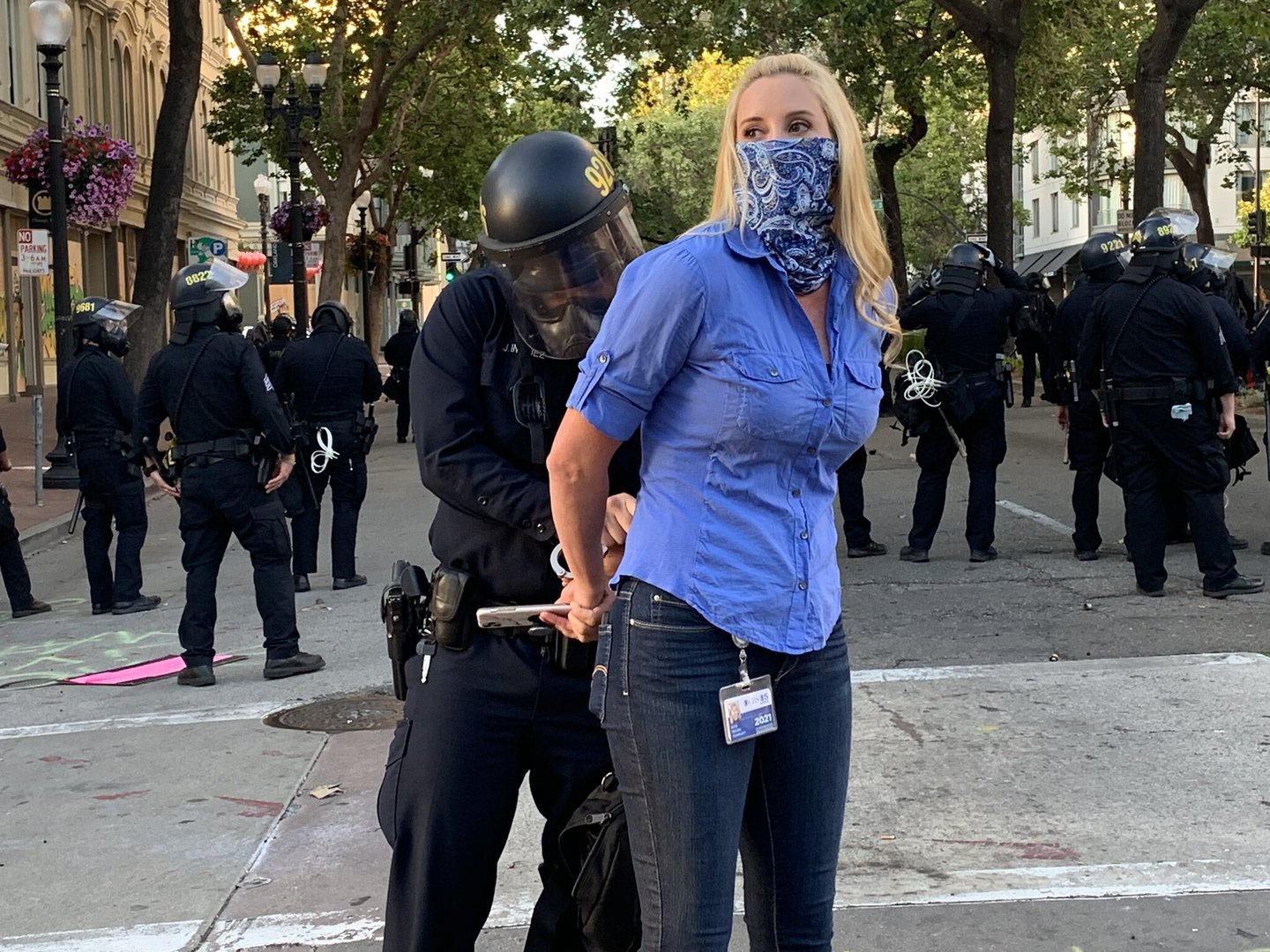 Police in Oakland, California, detain KPIX 5 News reporter Katie Nielsen on June 1, 2020. The interaction was captured by another photographer with whom Nielsen was documenting protests in the city.

Nielsen told the U.S. Press Freedom Tracker that she was documenting a peaceful protest organized by Oakland Tech High School students. Approximately 15,000 people had gathered with a plan to march to the Oakland Police Department on 7th Street, but were stopped by a police barricade a block away.

“Protesters started yelling. Officers masked up, and as soon as a protester threw something across the police line, they fired back with tear gas and flash bangs,” Nielsen said.

Police gave dispersal warnings as the 8 p.m. curfew approached; Nielsen said that about a dozen protesters were still in the area at curfew, and police rushed in to make arrests.

“I was grabbed by an officer and told to put my hands behind my back. I kept repeating that I was a reporter and had my credentials right here, visible,” Nielsen said.

A second officer approached her, but walked away after he heard that she was a reporter. The initial officer continued to walk her into the middle of the intersection and handcuffed her.

“The photographer I was with, Erin Baldassari, was not just a few feet away shooting everything that was happening to me,” Nielsen said. “They just held me there standing in the middle of the intersection.”

Police rushed in and started arresting everyone present pic.twitter.com/jATY8xjasM

Five to ten minutes later, a police lieutenant approached Nielsen, verified her credentials and released her without charges, she said. Nielsen said she was only in custody for a few minutes, but, “it was enough to keep us from reporting and shooting the arrests that were happening with the protesters.”

In an interview on KPIX 5 News after the incident, Oakland Police spokesperson Johnna Watson apologized to Nielsen for the arrest.

Here is the 11pm story about the protest, my detainment, and a statement from OPD regarding the incident. pic.twitter.com/mg9FRaYnz0

NBC Bay Area reporter and anchor Terry McSweeney was handcuffed and temporarily detained by police while filming an arrest during a protest in Oakland, California, on June 2, 2020.Protests in Oakland were held for several days in early June amid a national wave of demonstrations against racism and police brutality in response to the deaths of George Floyd, Breonna Taylor and other Black people at the hands of police.McSweeney and an NBC Bay Area videographer were covering the demonstration as …