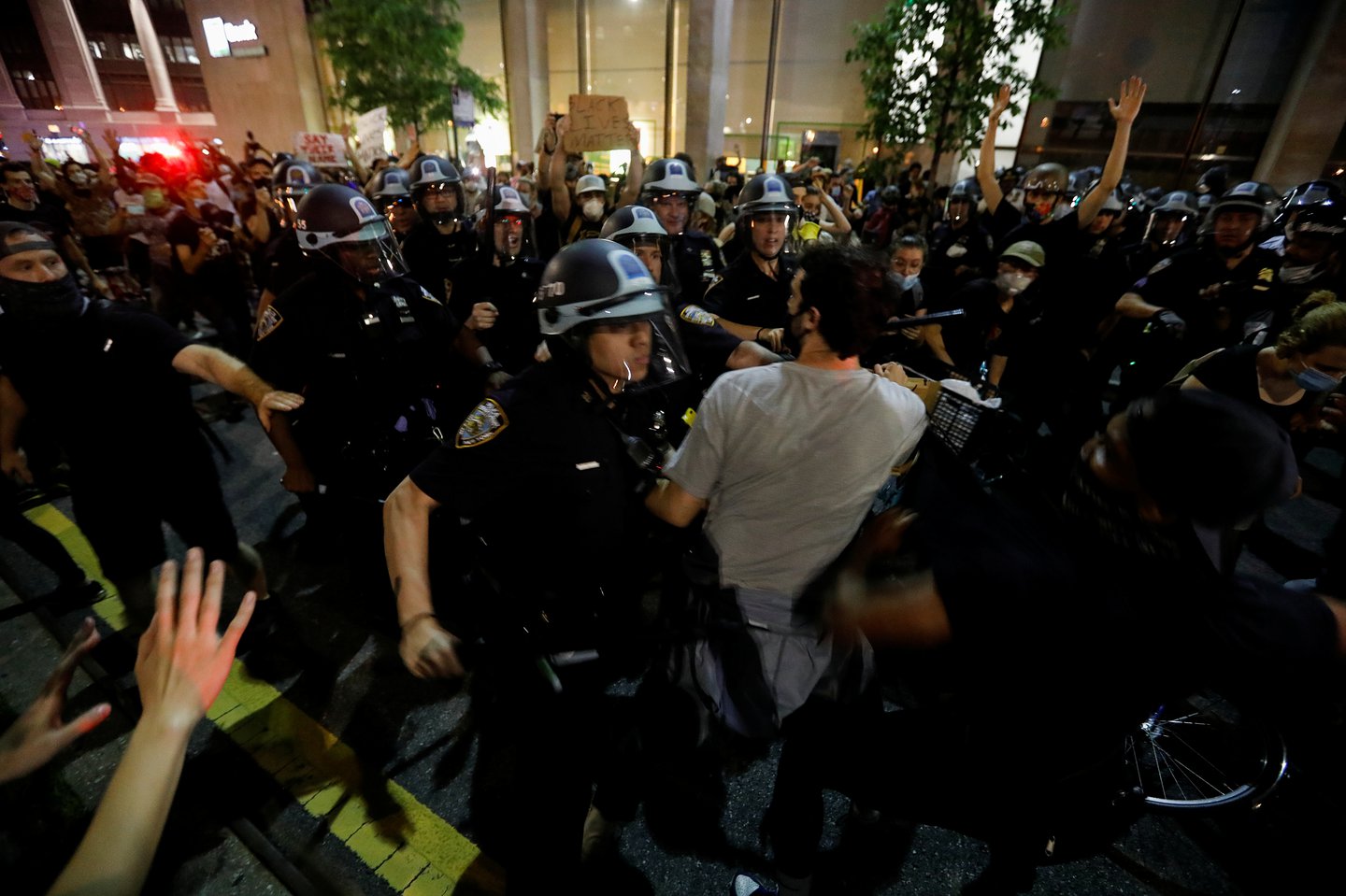 A man scuffles with law enforcement officers during a protest in the Brooklyn borough of New York City on June 3, 2020.

Tablet Magazine senior reporter Armin Rosen was beaten by police, who then confiscated his bicycle, while he was covering protests in New York, New York, on June 3, 2020.

Protests that began in Minnesota on May 26 spread across the country, sparked by a video showing a police officer kneeling on the neck of George Floyd, a Black man, during an arrest the day before. Floyd was later pronounced dead at a hospital.

Rosen told the U.S. Press Freedom Tracker that he was covering a protest march in downtown Brooklyn shortly after 9 p.m. New York Police Department officers had been gradually pushing the crowd toward Borough Hall but quickened their advance when a sudden downpour began.

Rosen — who had with him a reporting notebook, backpack, bicycle and helmet wrapped in white duct tape with “PRESS” emblazoned across it — walked his bike over to a nearby structure to take cover from the rain and put his notebook away so it wouldn’t be damaged.

Still got my helmet though! (Tape etc applied by @BenFeibleman last night) pic.twitter.com/M5zw2Bie26

“Facing the structure, and thus with my back to the crowd, I felt a blunt object strike my right shoulder and very quickly realized I was on the grass and surrounded by police,” Rosen said.

He added that he is unsure how many times officers struck him with their batons in total.

Three officers held him down while another demanded, “What the fuck is in your bag?” The officer then quickly searched the backpack as Rosen explained that he was a journalist and had been concerned about his notebook getting wet. Rosen said the officers did not ask him to produce any identification.

Rosen said another officer said, “Take your shit and get the fuck out of here,” and threw the still-open bag toward him.

“Once back on my feet, I was aggressively pushed forwards by a nearby cop and nearly fell to the ground again,” Rosen said.

That’s when Rosen said he realized that his bike was gone. When Rosen asked if the officers could return his bike, an officer responded, “It’s not your bike anymore.”

Rosen told the Tracker that he asked if there was a number he could call in order to recover the bike, but both the officers who had surrounded him and a man who appeared to be a commanding officer dismissed or ignored his requests.

“I currently have a large welt on my right shoulder from the initial blow, along with a second area of pain in my left buttock,” Rosen said.

Rosen told the Tracker that a fellow journalist found his bike more or less abandoned near Borough Hall along with multiple others a few hours after it was taken, and was able to return it to Rosen.

When asked for comment, an NYPD spokesperson directed the Tracker to the “30-minute mark” of a press briefing held by New York Mayor Bill de Blasio and Police Commissioner Dermot Shea on June 3.

Around that point in the recording, Shea says: “Wherever appropriate, we issue summonses in lieu of arrests. We’ve obviously done a lot of both summonses and arrests. The only thing that I might add on the point of the press: We’re doing the best we can, the difficult situation. We 100 percent respect the rights of the press. Unfortunately, we’ve had some people purporting to be press that are actually lying, if you can believe that. So sometimes these things take a second—maybe too long—to sort out.”

Independent journalist Janet Burns said she was shoved by a police officer while covering a protest in New York City on July 25, 2020.Burns said she was covering a demonstration that night in Lower Manhattan, at the corner of Delancey and Ludlow streets, for NYC Protest Updates 2020, a Twitter account set up by a group of young journalists after the May killing of George Floyd in Minneapolis sparked nationwide protests. The Twitter account has over 40,000 followers and provides …
More related incidents