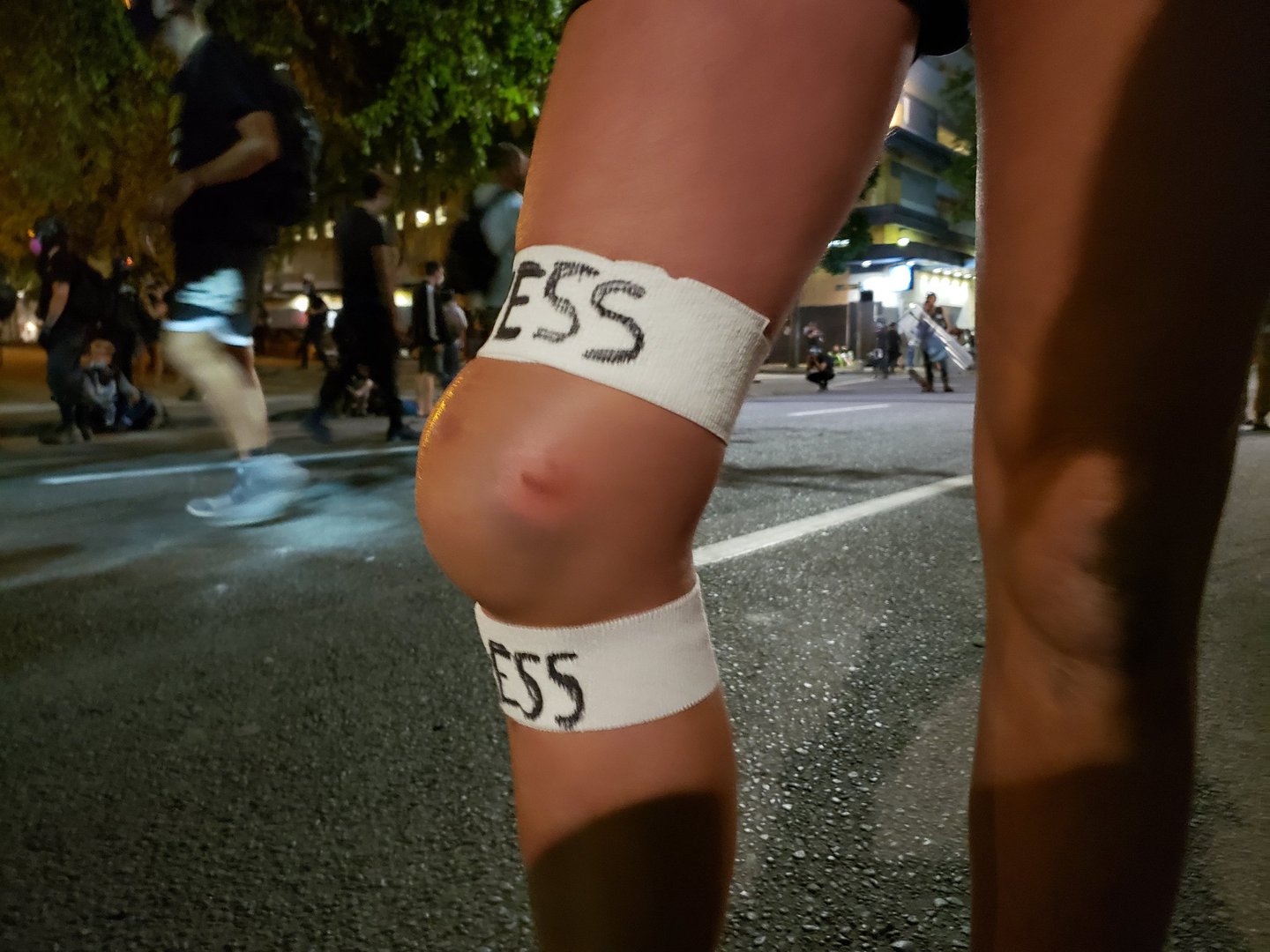 On July 30, 2020, photojournalist Maranie Staab was hit with a rubber bullet fired by law enforcement in Portland, Oregon. The next day, photojournalist Mathieu Lewis-Rolland captured her taped-up knee while she was reporting again.

Independent photojournalist Maranie Staab was hit in the knee with a rubber bullet fired by a federal officer while she was reporting on a protest in Portland, Oregon, early in the morning of July 30, 2020.

Racial justice protests in Portland had been held on a nightly basis since the police killing of George Floyd in Minneapolis on May 25. The protests had grown more intense as the presence of federal law enforcement increased in early July. A temporary restraining order on July 2 that barred the Portland police from harming or impeding journalists was expanded to include federal agents on July 23.

Thousands of people rallied around the Mark O. Hatfield U.S. Courthouse and the nearby Multnomah County Justice Center earlier in the evening of July 29, according to the Oregonian. Confrontations between federal law enforcement officers and protesters continued late into the night, and federal officers declared an unlawful assembly at around 11:30 p.m.

Staab, whose work has been published by outlets including The Washington Post, The New York Times and VICE, told the U.S. Press Freedom Tracker the protests continued past midnight. Toward the end of the night, she said federal officers were going into a garage at the back of the justice building when some protesters followed them. Staab said she was near the garage door, standing to the side of it.

As the garage door was going down, Staab said, officers started shooting rubber bullets out at the protesters and press who remained.

One rubber bullet struck her on the inside of her right knee, she said, causing her to collapse.

“I was just basically taken out,” she said. “My knee completely gave out and I just hit the ground.”

Staab said several journalists who were near her pulled her away from the area and helped her up. Within 30 minutes, her knee had swollen so much that the welt was visible through her jeans, she said.

A photograph Staab posted on Twitter later that day showed her knee very swollen and bruised.

My knee is fcked.

How did this happen?

Staab told the Tracker that she cared for the injury by elevating it, icing it and taking ibuprofen.

The next day, photojournalist Mathieu Lewis-Rolland posted on Twitter a photograph of Staab’s swollen knee, with white tape marked “PRESS” above and below it.

Staab said she continued to cover protests in the following days, wearing shorts because her knee was so swollen. The injury hobbled her for weeks, she said.

On the night she was hit, Staab said, she had used white masking tape with the word “PRESS” written in black marker to label herself on the front and back of her t-shirt and on her helmet. She said she was also carrying professional cameras.

Staab said that she does not have any way to know whether she was targeted. She noted that she was not standing near demonstrators, and said that federal officers did not “attempt to delineate between protesters and press.”

The Department of Homeland Security, whose officers were on duty that night, did not respond to a request for comment about the incident.

The U.S. Press Freedom Tracker is documenting assaults, arrests and other incidents involving journalists covering protests across the country.

Garrison Davis, an independent journalist, said he was pushed by law enforcement officers in separate incidents while covering demonstrations in Portland, Oregon, on Nov. 4, 2020.Davis was documenting two protests in progress; one group was calling for every vote cast in the U.S. presidential election to be counted, while another expressed a combination of dismay with the electoral system and support for the Black Lives Matter movement. Protests had been held in Portland on almost a nightly basis since the …

Documentary filmmaker Lance Bangs was pushed by law enforcement officers while covering demonstrations in Portland, Oregon, on Nov. 4, 2020, according to videos posted on social media.Protests had been held in Portland on almost a nightly basis since the death of George Floyd in Minneapolis on May 25. The U.S. Press Freedom Tracker is documenting assaults, arrests and other incidents involving journalists covering BLM protests across the country.There were two main demonstrations in Portland on Nov. 4, with one group …
More related incidents