Pulitzer Prize-winning photojournalist shoved to the ground by LAPD

A Los Angeles Police Department officer shoved freelance photographer Barbara Davidson to the ground, breaking a camera lens, while she covered a protest in the city on May 31, 2020.

The demonstrators were taking a left turn on foot from West Third Street onto South Fairfax Avenue when a police line advanced. An officer yelled at Davidson to leave. “I said ‘Sir, I’m a journalist’ and they just kept on screaming,” Davidson told the U.S. Press Freedom Tracker. She also showed them the badge identifying her as a journalist, but it made no difference in their demeanor toward her.

The LAPD didn’t respond to a request for comment.

“I realized in that moment that I wasn’t going to win this debate,” said Davidson, a Pulitzer-prize winning photographer who is currently a Guggenheim fellow. “I turned to walk away, and as I turned to walk away he shoved me with his baton and I went flying.” Davidson was wearing a helmet.

Fellow freelance journalist Jason Ryan witnessed the incident. “They wouldn’t even give her a minute to get up,” he told the Tracker. At 5:06 p.m. Davidson tweeted a photo of herself with the caption, “I got pushed from behind by the ⁦@911LAPD⁩ after I told them I was a journalist. I was hit so hard that I went flying before crashing to the ground and hitting the back of my head on a fire hydrant. Protesters picked me up preventing me from being crushed by the ‘line’.”

I got pushed from behind by the ⁦@911LAPD⁩ after I told them I was a journalist. I was hit so hard that I went flying before crashing to the ground and hitting the back of my head on a fire hydrant. Protesters picked me up preventing me from being crushed by the "line" pic.twitter.com/Hbp1M6RskL

Davidson said she had the symptoms of a concussion but had to delay seeing her doctor due to COVID-19. The lens of her Hasselblad camera was damaged in the fall and needed to be shipped to New Jersey for repair at her own expense.

Davidson has covered Los Angeles for 13 years and said she never had an encounter like that with an officer. “I was specifically targeted because I was a journalist and that’s why I decided to speak up,” she told the Tracker.

Photojournalist struck with rubber bullet during protest clashes in L.A.

Journalist struck in ankle with projectile while covering LA protest

A projectile fired by law enforcement struck freelance journalist Sam Slovick in the ankle as he covered a July 25, 2020, protest in Los Angeles, the journalist told the U.S. Press Freedom Tracker.The city had witnessed a series of racial justice protests following the police killing of George Floyd in Minneapolis on May 25. The local TV channel CBSLA reported on July 25 that several hundred protesters had gathered in downtown Los Angeles.Slovick, a freelance journalist and filmmaker whose work … 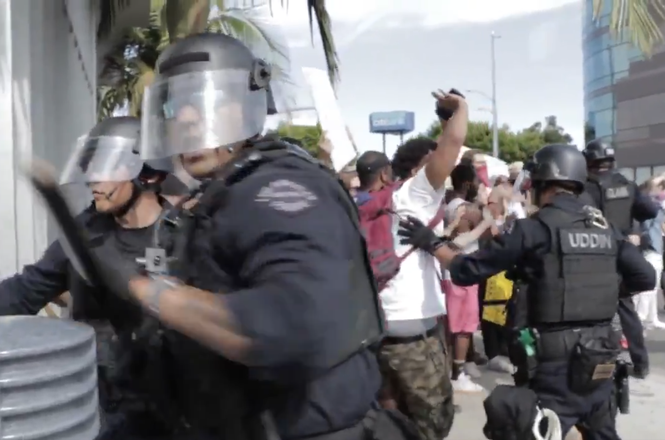 At least four journalists were assaulted by police officers while covering protests in Los Angeles on May 30, 2020.Freelance multimedia …
More related incidents