A snapshot of categories since the 2017 launch of the Tracker

Overview
By the end of 2019, the U.S. Press Freedom Tracker had captured more than 400 incidents of press freedom violations since its launch in 2017. It’s a significant number insofar as it means that more than 400 important cases across the United States — including arrests, subpoenas for source material, and attacks on journalists — have been documented in one place. 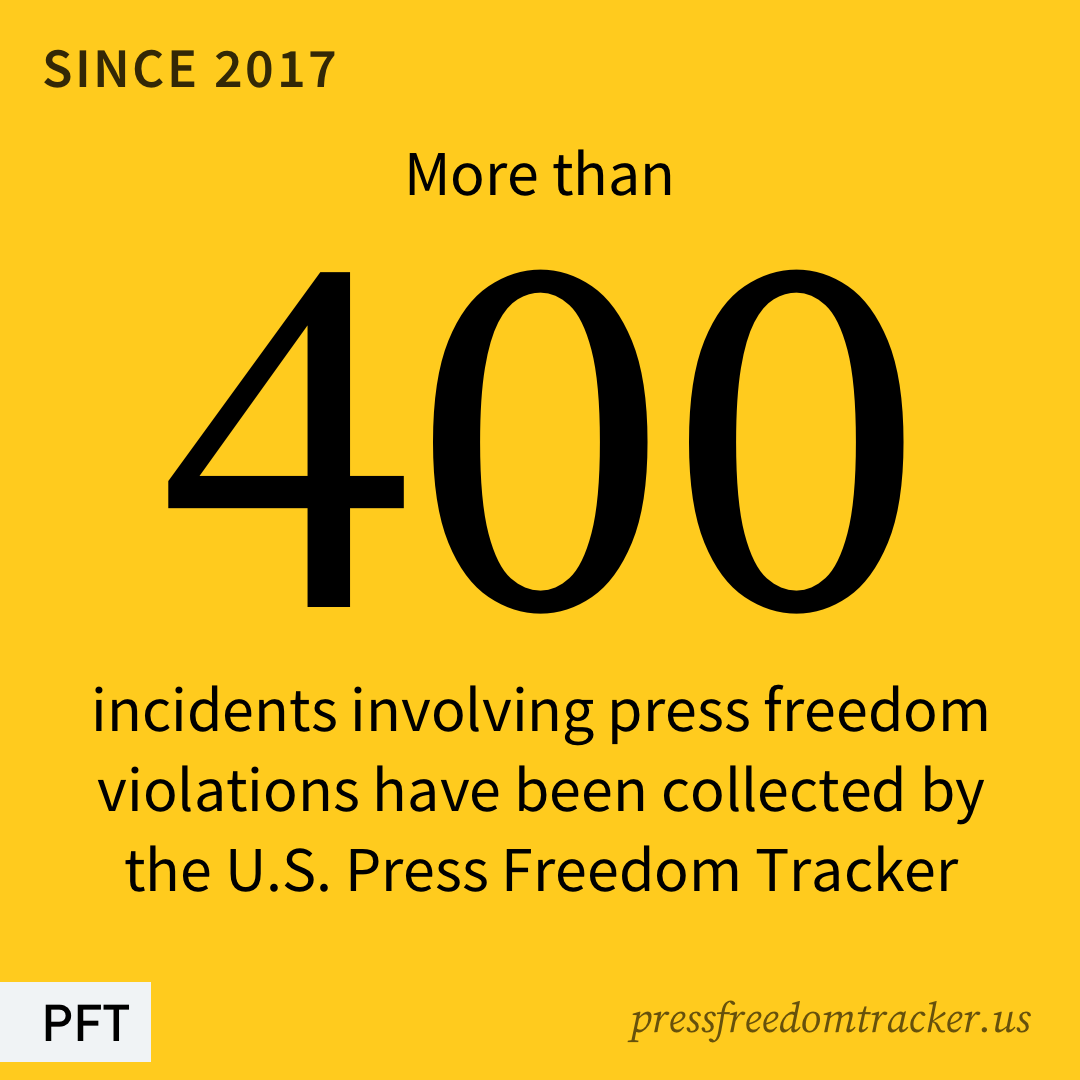 The question I get asked the most is, “Are press freedom violations increasing every year?” Speaking for the Tracker’s collection, I can only say, “It’s hard to say.”

While the number of incidents collected by the Tracker team increases each year, there are other factors at play. Now at three years old, the Tracker is more established; we’re getting better at finding these incidents and more partners and people than ever before are committed to helping us.

The Border Stop category is a good example of steady numbers but varying circumstances.

Since our 2017 launch we’ve tracked journalists stopped by U.S. Customs and Border Patrol as the screenings have been made public — whether or not we know that they were targeted. That’s different from other categories, like Arrests, which captures journalists arrested while in the course of, or because of, their reporting. We do this, in part, because government secrecy restrictions make it extremely difficult to identify the motive behind these secondary screenings.

By the numbers | Border stops

While the numbers of journalists stopped for secondary screening is fairly similar across the past three years, it’s worth mentioning that this year we published nine border stops that took place in 2017 and 10 border stops for 2018. We expect the same back publishing to continue in the years ahead as we continuously update the site as press freedom violations come to our attention.

But three years of documentation does give us some insight into patterns. I outlined two of those — of journalists crossing the border to cover the migrant caravan in Mexico and the escalating use of “fake press” rhetoric during screenings — for our partner Columbia Journalism Review earlier this year.

Students on the Beat

Three years of case collection — plus the 50th anniversary of Tinker v. Des Moines — also gave our reporter Stephanie Sugars a history from which to draw on as she analyzed the difficulties of being a student journalist. 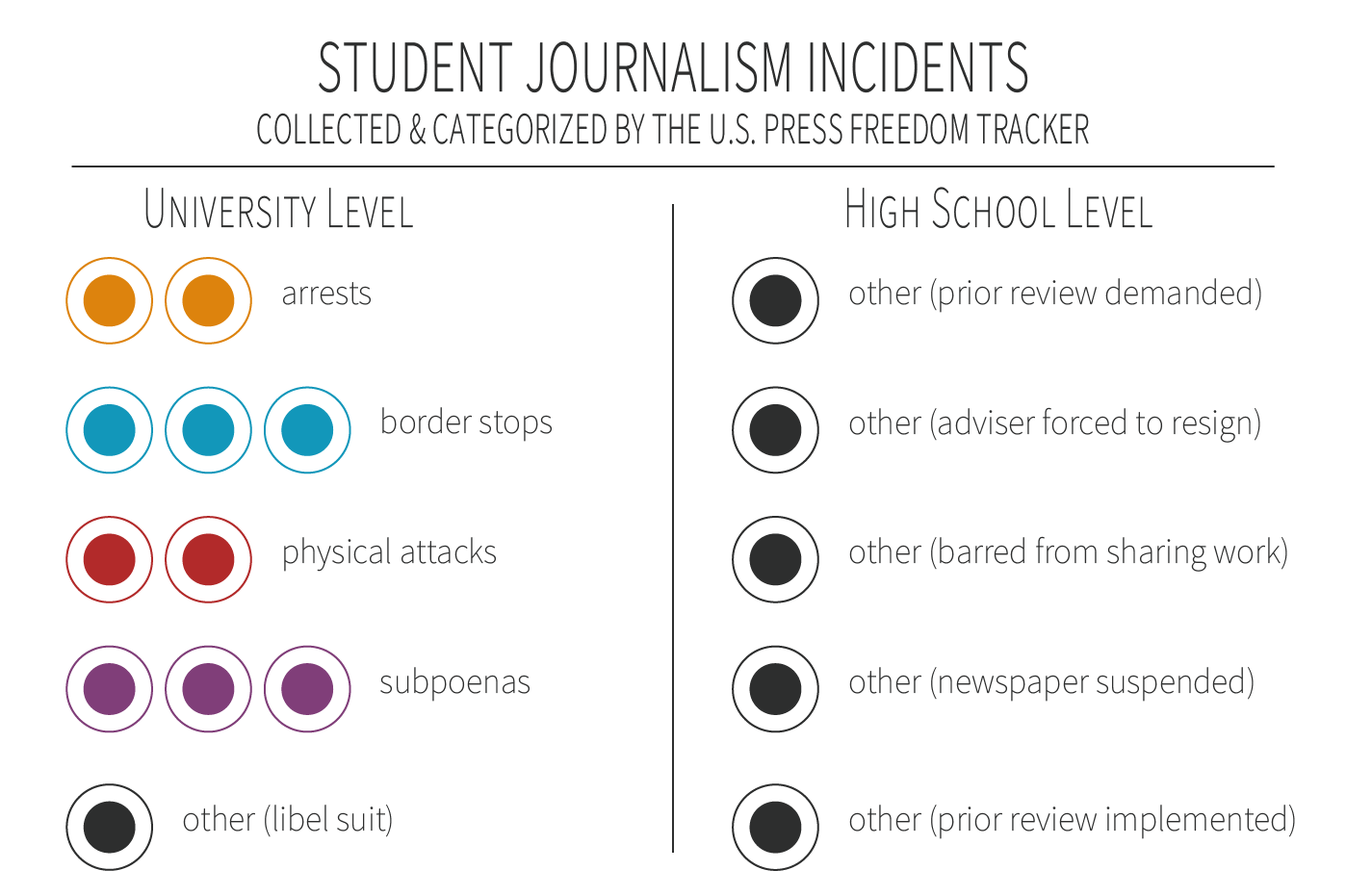 While these student journalists are often covering the same beats and topics as professionals, she writes, their legal protections vary. Find that work here.

A snapshot of categories this year

When the Tracker launched, it focused on capturing subpoenas of journalists and news organizations from government organizations seeking confidential work product and testimony. This year, we expanded the category to include private subpoenas, reasoning that these create an equal chilling effect and financial burden on media involved. With our limited resources, we’ve done our best to update the category so that all years reflect this change. 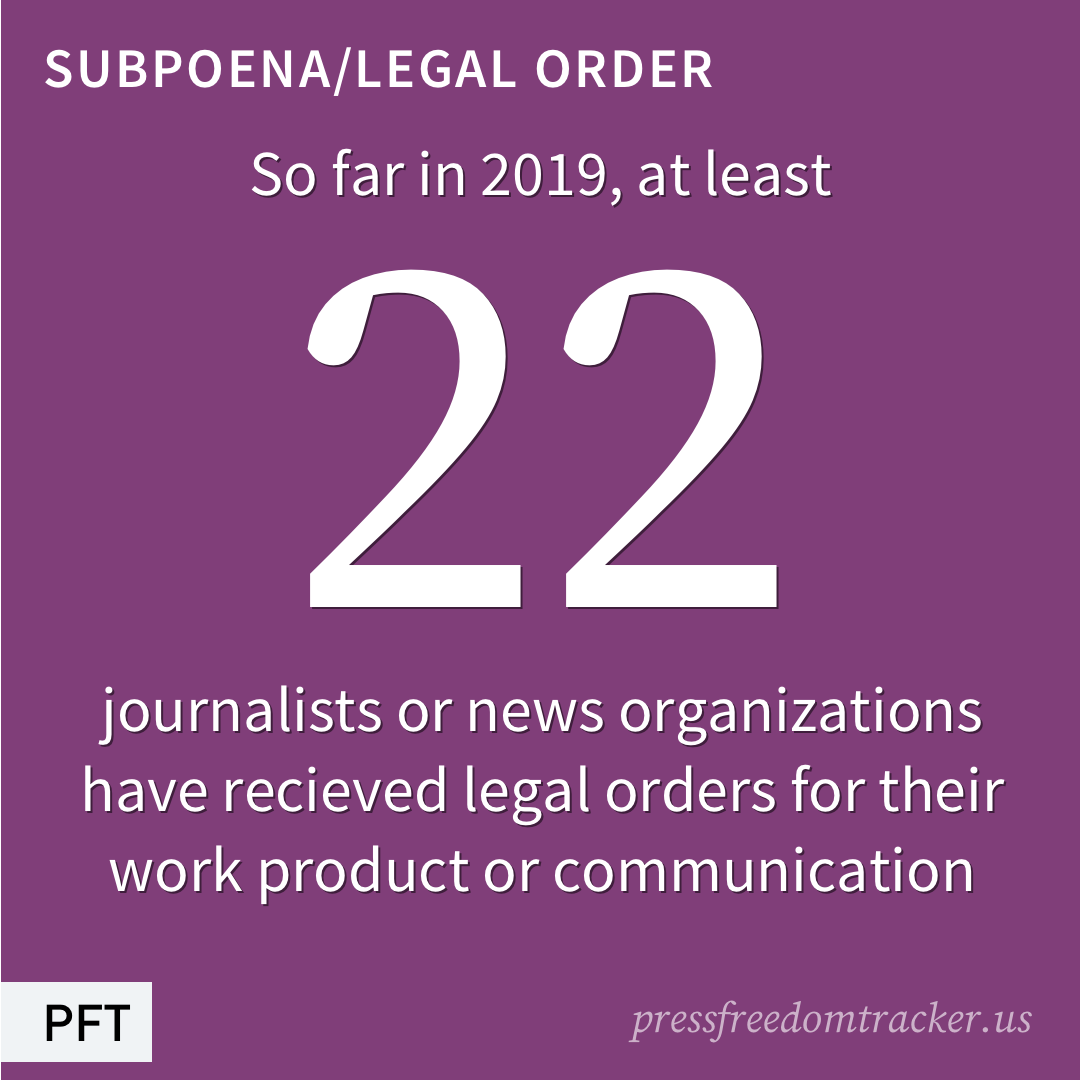 As always, if you are a journalist — or know of one — who has faced a subpoena for testimony, communications, information on a confidential source or for unpublished work product, we want to hear about it. Email [email protected]

It’s also not unusual for a press freedom violation in the Tracker to be documented across multiple categories. There are assaults with equipment damage, for example, and border stops of journalists who also have their electronic devices searched or seized.

The singular case this year that necessitated the most category cross-listing (and multiple updates) was the unlawful search of freelance journalist Byran Carmody in an attempt by the San Francisco Police Department to ascertain a confidential source. The California-based videographer was arrested at his home on May 10 while officers executed two warrants for the search of his home and office and seizure of equipment. Three other search warrants — for his phone records — were executed without his knowledge and came to light after the home and office raid.

All five of those warrants were eventually deemed invalid by San Francisco superior court judges. 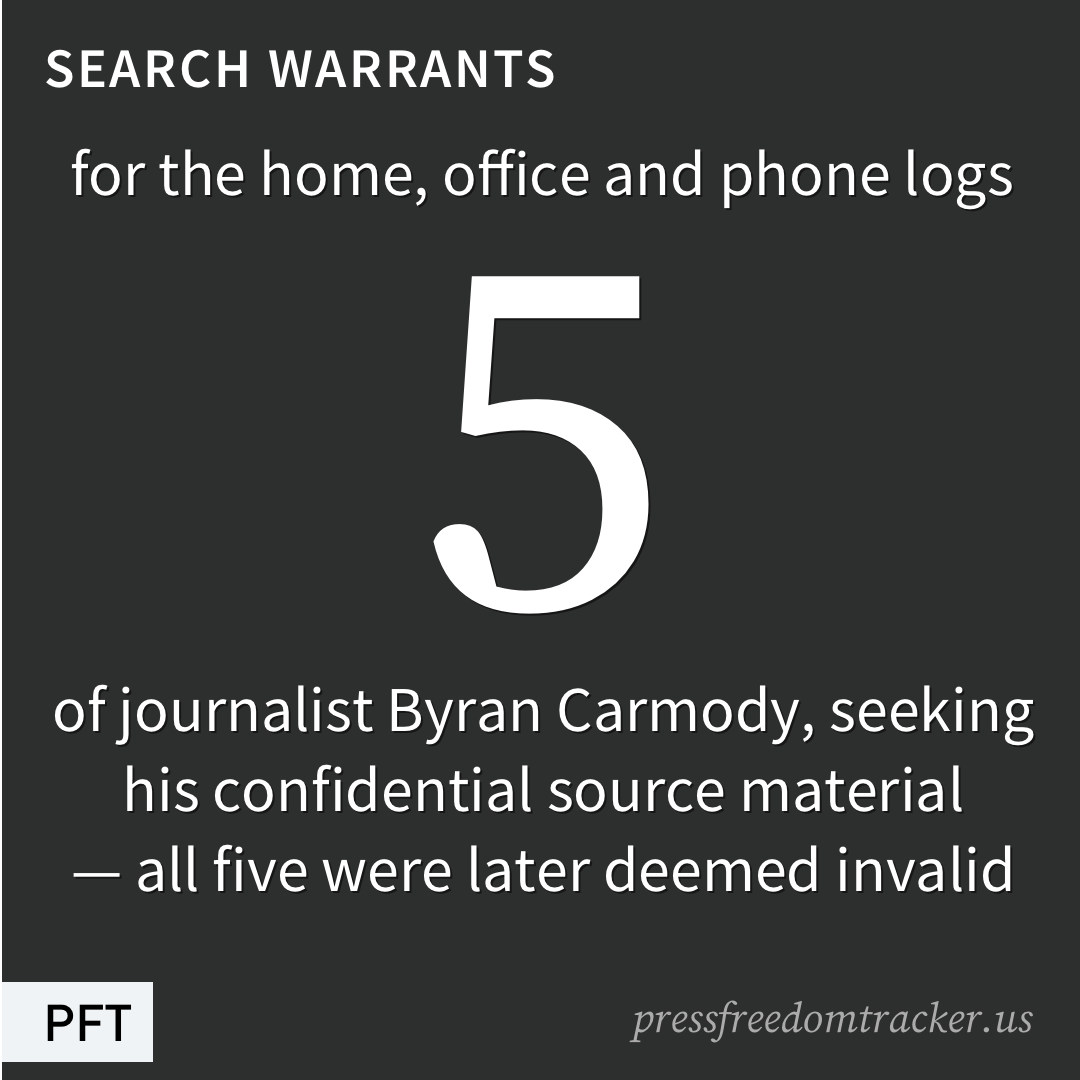 I encourage you to explore the comprehensive search functions on our home page to see how categories, tags, date queries and more interact with one another.

We did take some collective time off this year, but press freedom aggressions were never far from our thoughts.

While our offices were closed for the Thanksgiving holiday, we released on Twitter some gratitude with a list of positive press freedom outcomes captured throughout this year.

Now that we’ve taken a moment to look back, it’s all eyes forward on this first day of January. Any questions or comments can come to me directly at kirstin [at] freedom [dot] press and, as always, thank you for your support.