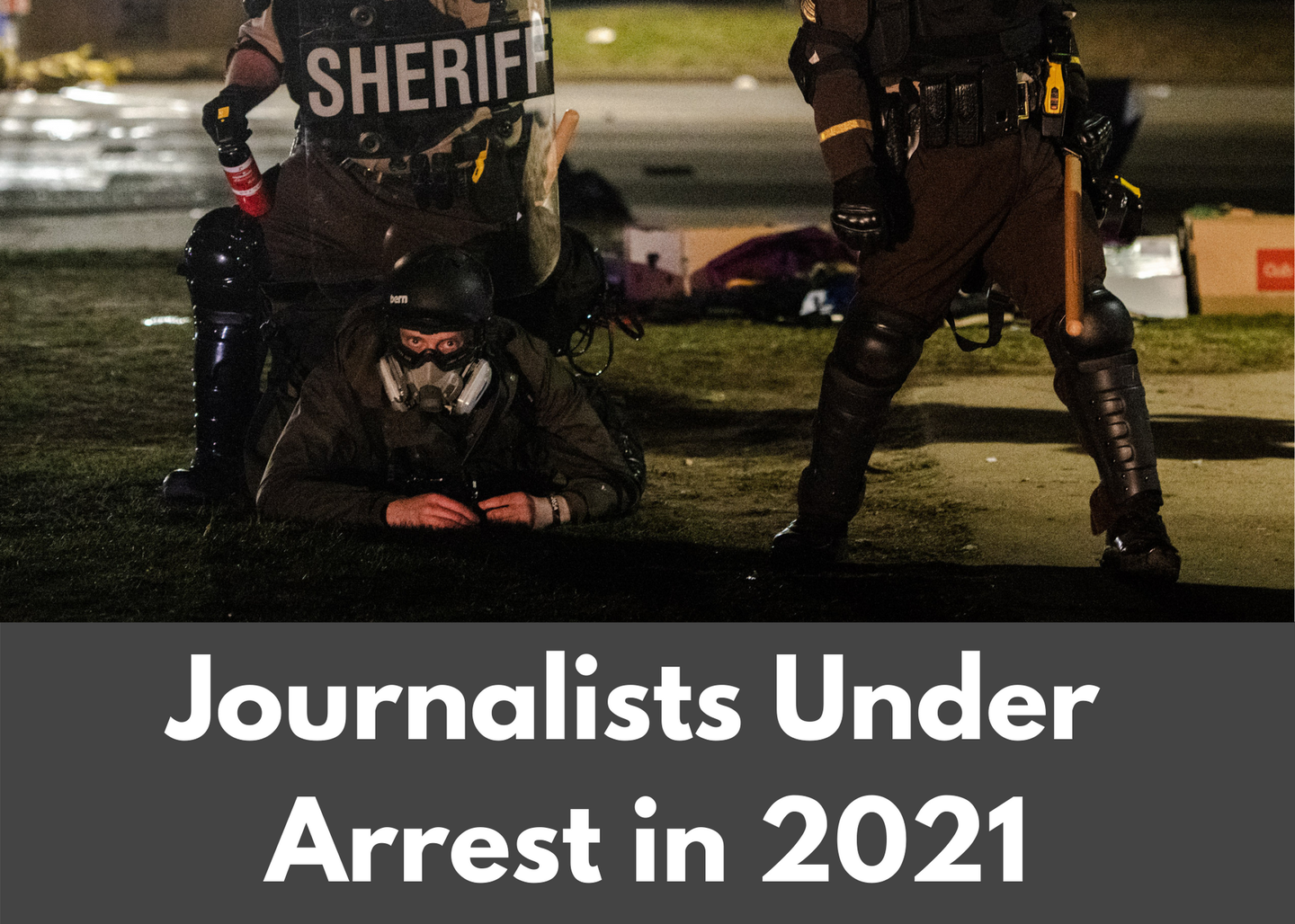 Photojournalist Tim Evans said the officer who detained him kneeled on his back and pushed down on him with a shield. Evans was covering an April 16 protest in Brooklyn Center, Minnesota.

Five days into 2021, the U.S. Press Freedom Tracker recorded its first arrest of the year: Journalist Sean Bascom was photographing anti-police brutality protests in Portland, Oregon, when he was handcuffed, held in a cell and issued a citation for trespassing and obstructing a peace officer. At the time of his arrest, he told the Tracker, the independent photojournalist was wearing a helmet with the word “PRESS” on it and identified himself as a journalist to the arresting officers.

The next day — Jan. 6 — as a swarm of people stormed the U.S. Capitol in an effort to stop the Congressional certification of election results, three journalists were detained in Washington, D.C. while covering the riots.

By the time the first week of 2021 came to a close, a total of four journalists had been arrested or detained while covering protests across the United States. Now, as we head into the last month of 2021, the Tracker has documented the arrests or detainments of 56 journalists, or an average of more than one journalist per week. Nearly 86% of those occurred during protests.

"Journalists must be able to cover protests freely, without interference from law enforcement.”

Joel Simon, Executive Director of the Committee to Protect Journalists

“There is simply no reason for police to be arresting and detaining journalists in the United States, but the fact that 56 such incidents were documented in 2021 suggests the problem has become deeply entrenched,” said Joel Simon, Executive Director of the Committee to Protect Journalists. “The data is all the more alarming because so many arrests took place at protests, which have become a critical form of political expression in the United States and around the world. Journalists must be able to cover protests freely, without interference from law enforcement.”

Journalists were arrested or detained in 11 cities throughout 2021, with mass arrests occurring in California and Minnesota. Hover over the map to explore each city’s incidents.

In 2020, the Tracker documented a record 142 arrests or detainments of journalists. Again this year, journalists continue to be arrested at protests, rounded up en masse by law enforcement in kettles and face assaults and other press freedom violations.

Journalists were caught in police kettles, a tactic used to pen in large crowds often before mass arrests, 23 times in 2020. In 2021, kettles resulted in 25 detainments or arrests of journalists.

On March 25, Keliyah “Gigi” Williams, a journalist for Los Angeles City College’s student newspaper, the Los Angeles Collegian, was among those detained while covering the homeless encampment clean up in the LA neighborhood of Echo Park. Williams told the Tracker that Los Angeles Police Department officers refused to accept her credentials; she was handcuffed for several hours and charged with failure to disperse. The charges were later dropped. LAPD kettled 19 journalists that evening, charging nine of them.

Just a few weeks after the mass detainment of journalists at the homeless encampment cleanup in LA, another 20 journalists covering social justice protests in Minnesota were arrested or detained over a span of four nights. One reporter, Naasir Akailvi, was detained twice during that time.

Demonstrations had broken out in Brooklyn Center after Duante Wright, a Black man, was shot and killed by a police officer not far from where the trial of Derek Chauvin, the police officer accused and later convicted of killing George Floyd, was ongoing in Minneapolis.

The May 2020 death of Floyd sparked massive anti-police brutality and social justice protests across the nation, which continued into 2021. Since May 2020, 148 journalists have been arrested or detained while covering Black Lives Matter protests.

Arrests with Assaults and other Press Freedom Violations

Journalist Joshua Rashaad McFadden was one of 12 journalists detained on April 16 while covering the Brooklyn Center protests. McFadden, who was on assignment for The New York Times, said he was with a group of journalists huddled together when the police rushed in. The journalists shouted “We’re press, we’re press!” McFadden said. “We don’t care,” the officers responded, and ordered the group to lie on the ground.

After identifying himself as a member of the press multiple times, McFadden — who had been told to stand up by an officer — said he was then knocked to the ground “like a football tackle” by a group of officers he identified as Minnesota State Police troopers.

McFadden said he sustained injuries to his shoulder and his camera was damaged when he was tackled. It was the second time in just a few days he was assaulted during the Minnesota protests.

Like McFadden, photojournalist Tim Evans was assaulted and had his equipment damaged while being detained on April 16.

Evans told the Tracker that he was photographing the detainment of another journalist when he was sprayed with a chemical agent by a law enforcement officer. Evans then identified himself as a journalist to the officer and held up a lanyard with his credentials but was quickly tackled by the officer, punched in the face and his credentials ripped off before being detained in zip ties. He was later released without charges.

In 2021, a total of 16 journalists reported assaults in connection with their arrests or detainments and five reported equipment damage.

At least three journalists also reported having their equipment searched during their detainment or arrests, including Border Report correspondent Sandra Sanchez.

Sanchez was detained by military police on Sept. 19 after taking photos of Laughlin Air Force Base near Del Rio, Texas. Military police detained her for nearly an hour and threatened to arrest her for illegally entering the base. She was eventually released without charges after she complied with their demands to delete all photos and videos she had taken of the base, an incident captured in the Tracker as both an arrest and equipment search and seizure.

Pending Charges and Beyond 2021

Since its launch in 2017, the Tracker has documented a total of 262 arrests or detainments of journalists in the course of reporting. And repercussions last long beyond their arrests.

Despite public outcry from human rights and press freedom advocates, Des Moines Register journalist Andrea Sahouri went on trial this year following her May 2020 arrest. Sahouri, who was pepper sprayed and charged with failure to disperse and interfering with official acts while covering a Black Lives Matter protest in Iowa’s capital city, was swiftly acquitted in March 2021 of all charges by a six-member jury.

As of publication, seven journalists still face charges stemming from arrests while reporting — five from 2020 and two from 2021.

Maribel Perez Wadsworth, president of news at Gannett Media, the Register’s parent company, said in a statement that the verdict was a victory for the First Amendment as well as for Sahouri.

“We are very grateful that justice was done today, and that Andrea was fully exonerated. But it should never have come to this,” Perez Wadsworth said. “It was clear Andrea was at that protest as a working journalist. Andrea was assaulted, arrested, charged and ultimately tried for doing her job.”

As of publication, seven journalists still face charges stemming from arrests while reporting — five from 2020 and two from 2021. (For this report, the Tracker contacted journalists and state law enforcement agencies involved with every incident from 2017 forward where charges were listed as pending or unknown — statuses were verified or updated where responses were received.)

Jefferson Public Radio reporter April Ehrlich is one who continues to face charges more than a year after her arrest. While covering the September 2020 cleanup of homeless encampments in Medford, Oregon, Ehrlich was arrested and charged with criminal trespassing, resisting arrest and obstruction. Ehrlich’s trial date is currently scheduled for March 2022 and she faces more than a year in jail and $7,500 in fines if convicted.

In a statement condemning the arrest, the Oregon chapter of the Society of Professional Journalists said arresting journalists has a chilling effect on a free press.

“Journalists should not face arrest for simply doing their jobs, which include observing the conduct of public officials and law enforcement officers in public places and reporting those actions to the communities they serve.”

Kiovangie “Kio” Herrera is a reporter for the U.S. Press Freedom Tracker where she documents press freedom violations in the U.S. She is a graduate of Columbia University’s Graduate School of Journalism where she was a Toni Stabile Investigative Journalism Fellow. Her previous work focuses on criminal justice, education, and healthcare. Recently, she was a Research Fellow at the Brown Institute for Media Innovation. Her reporting and research have appeared in the Center for Public Integrity, Centro de Periodismo Investigativo de Puerto Rico, and the Marshall Project.

She is from Washington Heights, in Upper Manhattan.