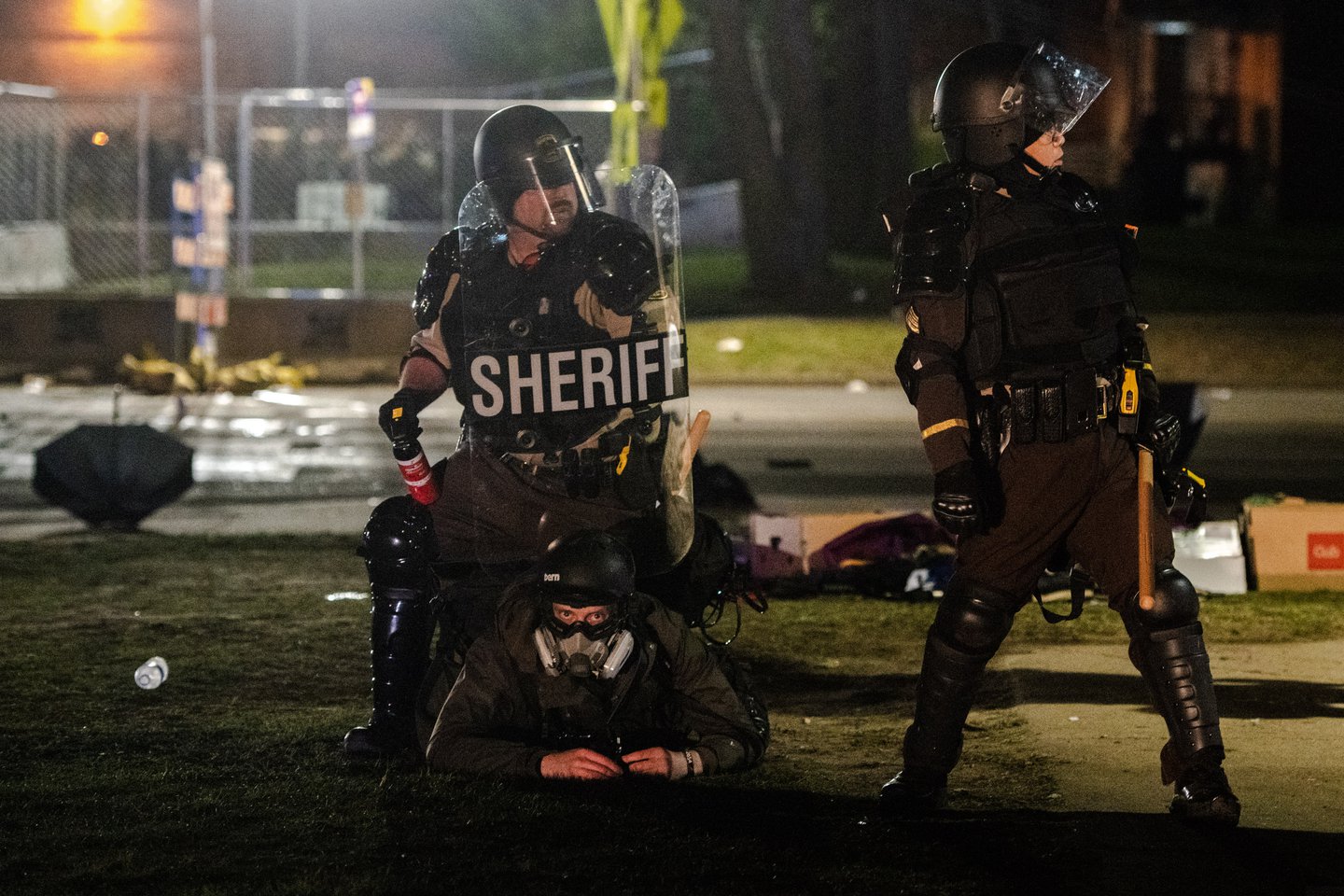 Photojournalist Chris Tuite captured the detainment of fellow photojournalist Tim Evans during an April 16 protest in Brooklyn Center, Minnesota. Evans said the officer who detained him kneeled on his back and used a shield to push down on him.

Freelance photojournalist Tim Evans told the U.S. Press Freedom Tracker he was assaulted by multiple law enforcement officers and detained while reporting on a protest in Brooklyn Center, Minnesota, on April 16, 2021.

Evans was one of at least 10 journalists detained that night, according to reports given to the Tracker, noted on social media or published in other news outlets.

Several hundred protesters had marched to the Brooklyn Center Police Department in response to the fatal shooting of 20-year-old Daunte Wright, a Black man, by a white police officer during a traffic stop. Wright’s death, on April 11, occurred as a former police officer in nearby Minneapolis was on trial in the death of George Floyd, rekindling a wave of protests against racial injustice and police brutality that had started nearly a year earlier. According to state officials, a coalition of law enforcement agencies, including the Hennepin County Sheriff’s Office, the Minnesota State Patrol, and the Brooklyn Center Police Department, was involved in enforcement that night.

Evans, whose work has been published by the European Pressphoto Agency, the Guardian, NPR and other outlets, told the Tracker he arrived to cover the protests earlier in the evening. The demonstration was peaceful, he said, though a few people in the crowd shook the fence around the police station or threw a water bottle at law enforcement. Evans said he heard law enforcement announce an order to disperse at 9:45 p.m. Shortly after 10, he said, law enforcement moved swiftly to form a “kettle,” a crowd-control tactic in which officers block people from leaving.

As law enforcement closed in around the crowd, Evans said, dozens of Hennepin County sheriff’s deputies moved out from behind a fence that surrounded the Brooklyn Center police station, tackling people and spraying them with chemical agents “indiscriminately.”

Evans said that after he’d photographed an officer tackle someone to the ground in front of him, he’d looked to his right, toward a group of other photojournalists. When he turned to look back to his left, he said, he saw a sheriff’s deputy running directly at him. Evans said the officer, about 5 feet away, sprayed him in the face with a chemical agent he believes was mace.

Evans, who was wearing a helmet and goggles, said he dropped to his knees and held up his press credential in one hand and one of his cameras in the other; his credential, he said, is a card he made himself that features his name and photo and states “press” on the top and “photojournalist” on the bottom. In addition to his credential, he said, he had a label fixed to his backpack that identified him as “PRESS.”

Evans said that while he was still kneeling, he took a photograph of another photojournalist being confronted by a law enforcement officer. Right after taking the frame, he said, he heard someone shout, “Get on the ground!”

Evans said he then looked to his left and saw a sheriff charging at him. He said he held out his press credential and shouted to identify himself as press, but the officer proceeded to tackle him onto his back and punch him in the face. Evans said his face was largely protected because the brunt of the blow hit the padded goggles he was wearing.

The officer then ordered him to roll over onto his stomach, Evans said, and told him he was under arrest.

Evans said he complied, continuing to tell the officer he was a journalist. The officer, he said, ignored him and told him to “shut up.” While lying on his stomach, on top of his camera, Evans said he held his press credential over his shoulder. He said the officer grabbed the card, unsnapping the clasp on the lanyard, and threw the pass facedown.

“He rips it off and just, like, throws it into the ground and tells me he doesn’t give a fuck who I am, he doesn’t care if I’m media, and that I should have left when I had a chance,” Evans told the Tracker.

Evans said the officer kneeled on his back and used a shield to push down on him. At that point, Evans said, it seemed clear the officer was not going to release him because he was a journalist, so Evans said he started to try and attract the attention of other law enforcement nearby.

Evans said another officer soon came up to them and asked the deputy if Evans was being arrested. Evans said he tried to tell the new officer that he was press. The new officer told him to “shut the fuck up” and smashed the back of Evans’ helmet, thrusting his face into the dirt. Evans said he could not clearly see this officer, but he believes it was also a sheriff’s deputy.

Evans’ hands were restrained with zip-tie cuffs behind his back, he said. After a few minutes on the ground, he said, he was raised to his feet and brought to sit on a curb.

About 10 minutes later, he said, another officer, who Evans believes was a Minnesota State Patrol trooper, came by and offered to make adjustments so he would be more comfortable. He said he told her he shouldn’t be there because he was a member of the press.

The officer looked at his credential and asked him about who he worked for. Evans said she then went to speak to a lieutenant. When she returned, she said they would let him go, “as long as I agreed to leave the area, and not continue to cover,” Evans said.

“I agreed because at that point, you know, I was not in a position to make demands, I suppose,” he told the Tracker.

He said the officer cut the zip-ties and escorted him to the police perimeter, about a block away, where he was allowed to go.

Evans said he does not believe he was targeted by the first officer, who sprayed the chemical agent at him. “But everything from that point on felt targeted,” he told the Tracker.

Evans said he felt the second officer who attacked him “became more aggressive when he realized that I was a member of the media.”

Evans said the spray left him with rashes on his face, though the impact was mitigated because he was wearing personal protective equipment. His helmet and goggles also protected him from the impact of the punch and having his head shoved into the ground, he said. He said he had scratches on his hands, which he thinks were from the scuffle, but he did not require any medical attention.

The body of one of his cameras was scuffed, the screen protector was broken, and a rubber thumb grip was ripped off, he said. He said his equipment, including his lenses, is all still functional.

Evans’ detainment came hours after a federal judge had issued a temporary restraining order barring Minnesota State Patrol from arresting or using force against journalists, in response to a motion filed earlier in the week by the American Civil Liberties Union of Minnesota.

Evans wrote a declaration about his experience, which the ACLU presented with a letter to the court the following day. He told the Tracker he is planning to file a formal complaint with relevant law enforcement agencies and is considering other action.

A spokesperson for the Hennepin County Sheriff’s Office told the Tracker that the department is aware of the incident and is investigating whether any of its staff were involved. He declined to comment further, pending the determination of the investigation. Minnesota State Patrol did not respond to a request for comment.

The U.S. Press Freedom Tracker documents journalists assaulted, arrested, struck by crowd control ammunition or tear gas or who had their equipment damaged in the course of reporting. Find all incidents related to Black Lives Matter and anti-police brutality protests here.

Freelance photojournalist Tim Evans joined the American Civil Liberties Union of Minnesota’s lawsuit against officials from the Minnesota State Patrol and Hennepin County Sheriff David Hutchinson on Sept. 28, 2021, according to an amended complaint reviewed by the U.S. Press Freedom Tracker.

Evans was sprayed with mace, assaulted by multiple officers and detained while documenting protests in Brooklyn Center on April 16, 2021, sparked by the death of Daunte Wright.

At least 15 journalists were detained by police while covering protests in Brooklyn Center, Minnesota, on the night of April 16, 2021, according to reports given to the U.S. Press Freedom Tracker, noted on social media or published in other news outlets.Several hundred protesters marched to the Brooklyn Center Police Department in response to the fatal shooting of 20-year-old Daunte Wright, a Black man, by a white police officer during a traffic stop. Wright’s death, on April 11, occurred as …

Two Minneapolis Star Tribune photojournalists were among a group of journalists detained by police while covering protests in Brooklyn Center, Minnesota, on the night of April 16, 2021, according to reports shared with the U.S. Freedom Tracker, or published on social media or other news outlets.Several hundred protesters marched to the Brooklyn Center Police Department in response to the fatal shooting of 20-year-old Daunte Wright, a Black man, by a white police officer during a traffic stop. Wright’s death, on …

Reg Chapman, a reporter for Minneapolis CBS affiliate WCCO, said he was detained by police with multiple other journalists while covering protests in Brooklyn Center, Minnesota, on the night of April 16, 2021.Several hundred protesters marched to the Brooklyn Center Police Department in response to the fatal shooting of 20-year-old Daunte Wright, a Black man, by a white police officer during a traffic stop. Wright’s death, on April 11, occurred as a former police officer in nearby Minneapolis was on …
More related incidents