Assaults of journalists, while fewer than last year, all at the hands of private individuals

Published On
March 31, 2022
Written by
Kirstin McCudden from Freedom of the Press Foundation

On March 25, we noted on social media that it was one year since 19 journalists were arrested or detained in Los Angeles’ Echo Park Lake, the most arrests the Tracker has documented in a single day. Those journalists were documenting the clearing of a large homeless encampment, and ensuing demonstrations against that sweep, when they were arrested or otherwise kept by law enforcement from reporting.

All told, 2021 would see 59 arrests or detainments of journalists. By way of comparison, so far in 2022, zero journalists have been arrested or detained.

Five, however, have been assaulted this year, including a Denver-based photojournalist who was at the city’s Union Station, covering, ironically, a story on a crime spike in the area. The reporter/anchor with him at the time told the U.S. Press Freedom Tracker that an individual ran up to the CBS Denver News journalist and hit him in the head, threatening to kill him. While the station declined to identify the photojournalist, the Tracker was told he was OK.

As in Denver, all 2022 assaults of journalists documented by the Tracker have been at the hands of private individuals:

By this time last year — the end of March, 2021 — the Tracker had documented 48 assaults of journalists. Just more than half of those — 25 — came from private individuals, and the remaining 23 from law enforcement.

At the Tracker, we’re constantly evolving in an effort to improve, well… everything. We recently launched a Spanish-language tips submission portal as a way to increase outreach to journalists across the U.S. 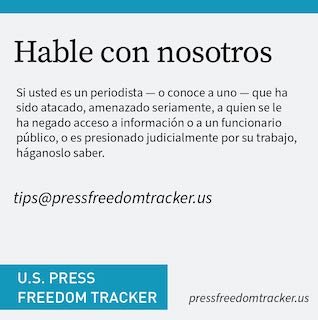 Next month, you’ll see a total website redesign that will make finding, organizing and understanding Tracker data easier than ever before. I can’t emphasize enough how proud I am of our team for working toward these updates that uphold our mission of being a centralized repository for data about press freedom in the U.S. You, too, can support the Tracker’s mission by donating here.