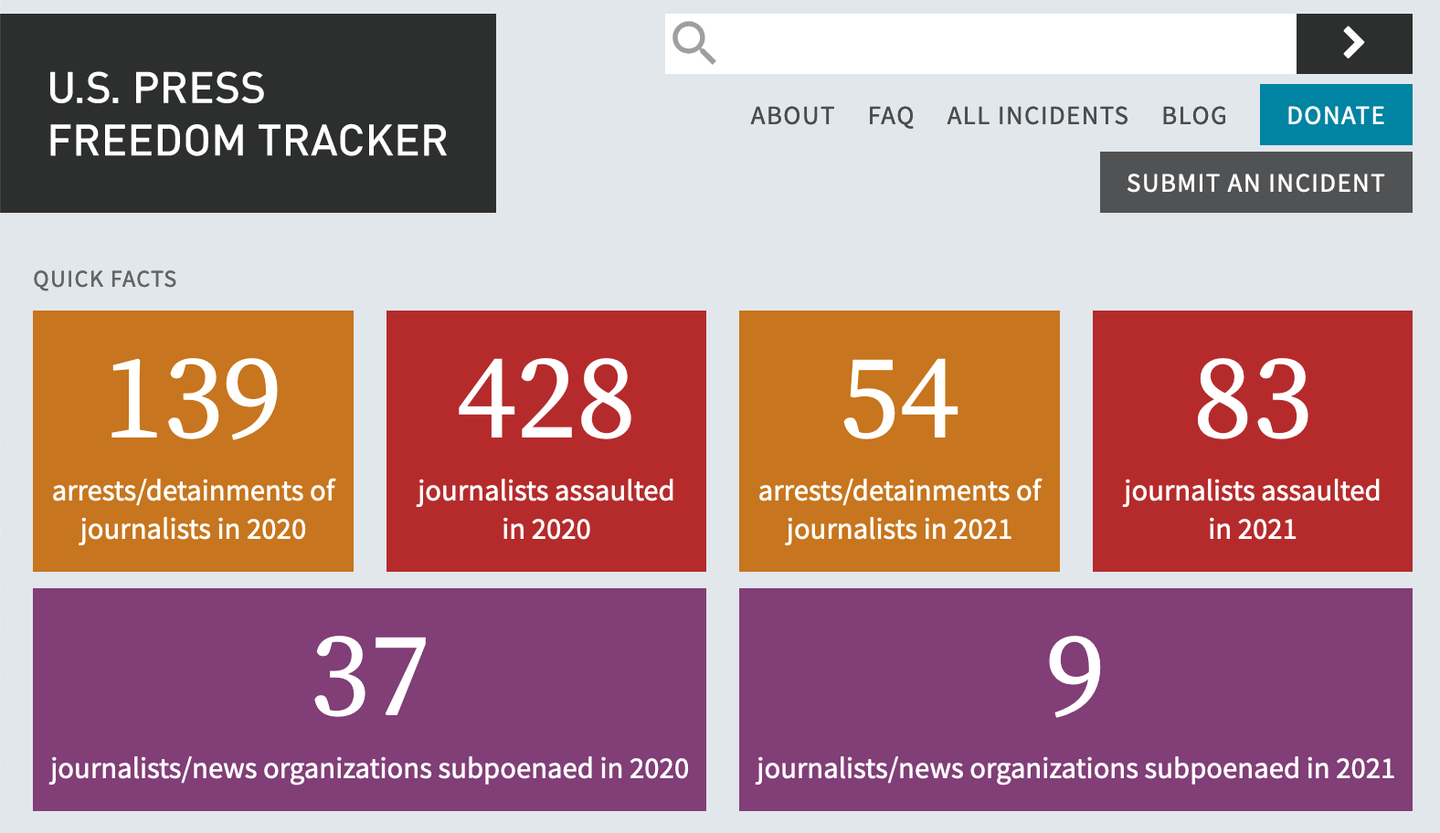 Each month, this newsletter opens with a snapshot of categories from our home page. The above image shows a comparison between what we documented in 2020 and what we’ve documented so far this year in three categories: Arrests, Assaults and Subpoenas/Legal Orders.

On July 15, the man who murdered 5 staffers of the Capital Gazette in the nation’s worst newsroom shooting was found criminally responsible. In 2019 he had pleaded guilty but not criminally responsible, Maryland’s version of the insanity plea. The jury’s verdict means Jarrod Ramos will face prison. He’s scheduled to be sentenced on Sept. 28.

On July 19, the Department of Justice formally adopted Attorney General Merrick Garland’s recommendations to stop collecting information on journalists. The new policy followed multiple revelations of recent DOJ attempts to seize email and phone records of journalists, including an attempt to seize emails of three Washington Post reporters in 2020. Garland met last month with leadership at the Post, The New York Times and CNN.

On July 27, hearings began for the House select committee investigating the Jan. 6 Capitol riots with testimony from law enforcement on the ground that day. Journalists reporting from D.C. during the riots were assaulted, detained, threatened and had their equipment damaged from crowds hostile to media. We documented at least 18 incidents. 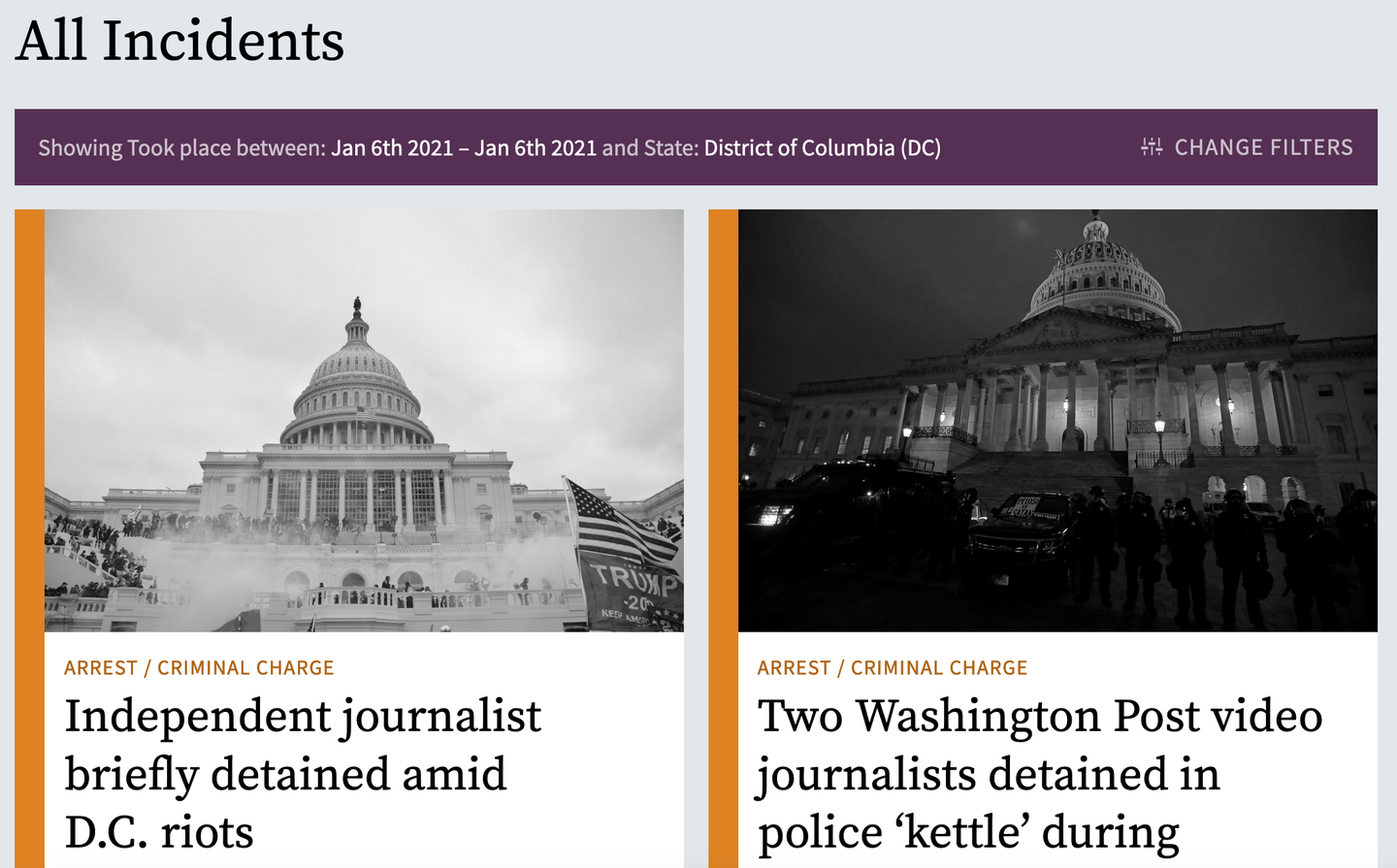 The (California) State of Things

In the newsroom, we’ve noticed an unusual trend out of America’s most populated state: Broadcast journalists in California are getting robbed of their equipment.

In February, an NBC Bay Area TV crew was robbed by two men in San Francisco who claimed to be carrying firearms under their clothing. The men reportedly demanded that the journalists hand over their camera equipment, which they did. The journalists were able to provide the police with a license plate number and descriptions of the alleged robbers; two men were later arrested and the camera was returned to the news crew.

In March, Don Ford, a reporter with TV station KPIX 5 was robbed of his equipment at gunpoint in San Francisco. He told us that the station had offered a security guard but that he declined that day: “I was in an upscale neighborhood in the middle of the day. I felt safe. I was wrong,” he said. The camera was recovered the next day. 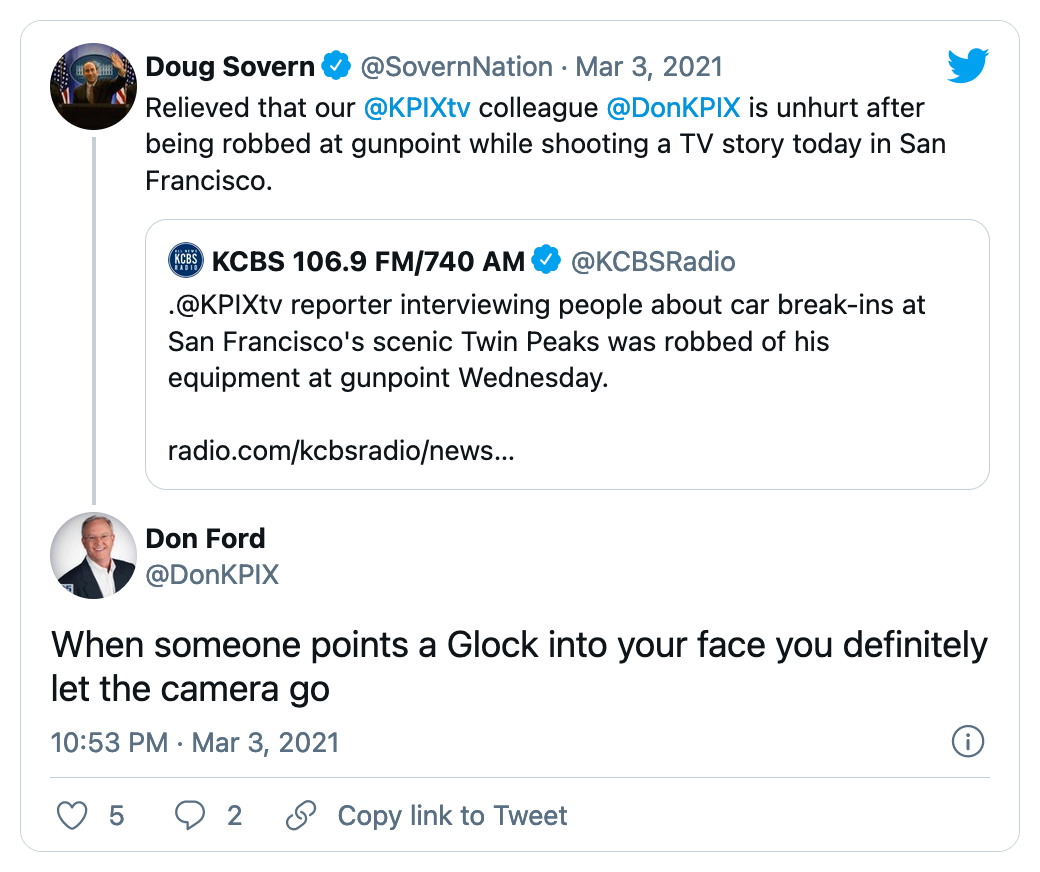 Ford took a two-week break after that armed assault. He returned to work, and on his second day back, he was assaulted by a man who attempted to steal another station camera. Ford told the Tracker that he did have a security detail with him in the city that time, and both were blinded for “almost an hour” after being “doused” with pepper spray by the assailant.

The security guard gave chase, and the assailant dropped the camera, heavily damaging it, Ford said.

In late June, an NBC Bay Area news crew was interviewing a city official in Oakland about — ironically — a recent surge in crime when two armed individuals ordered the crew’s cameraperson to hand over the equipment.

The news crew’s security guard drew his firearm and the assailants fled without the camera.

A spokesperson for the San Francisco Police Department told us that they believe the TV crews have been targeted because of the high-dollar value of their electronic equipment, rather than their status as journalists.

These are all captured in our Assault category. So far in 2021, more than 100 journalists have been assaulted; 23 of those in California.

We’ve also documented 22 arrests of journalists in the Golden State so far this year. Nineteen of those arrests came on a singular night in March during a protest of a sweep of a homeless encampment in L.A.

Also, California is the third largest state by size, behind Texas and Alaska. I don’t have a press freedom fact to go with that, but as a Texan I just have that type of information squirreled away.

By the middle of this month, the Tracker team had documented more press freedom violations in 2021 than we documented in all of 2019. In 2019, we documented more press freedom violations than the year before. Which had been more than the year before that. While 2020 is — and will hopefully remain — an anomaly, this year still has 5 months left in it. I’ll be back at the end of the next one to keep you updated. Until then, please consider a donation to the Tracker to support our work.

Kirstin McCudden is vice president of editorial for Freedom of the Press Foundation and managing editor of the U.S. Press Freedom Tracker.