Each month, this newsletter opens with a snapshot of categories from our home page. Above shows what we’ve collected across four of our categories so far this year.

This month we published a blog post by the Tracker’s Senior Reporter, Stephanie Sugars, who examined harassment faced by journalists filming or photographing in the field. There’s some great interviews in her piece — from the broadcast reporter who couldn’t film protester’s faces under the threat of being pelted with eggs, to the student reporter who questions why anyone would choose to go into journalism knowing the amount of harassment they’ll face.

The takeaway from Mickey Osterreicher, general counsel for the National Press Photographers Association, is that harassment is coming from across the political spectrum.

“It’s not just from people on the right or the left, it’s from everybody,” Osterreicher said.

Sugars’ post also looks at the issue from a categorical review:

Of the 34 incidents of equipment damage captured in the database so far in 2021, at least 25 involved cameras or camera equipment; almost all of these followed harassment because the journalist was photographing or filming. In 2020, the Tracker documented more than 50 instances of damaged camera equipment. That doesn’t include the number of cell phones damaged since tracking began, many of which are used by journalists to film.

Read: For visual journalists, harassment now comes from all sides

Also this month in harassment-that-chills news, Missouri Gov. Mike Parson called a journalist with the St. Louis Post-Dispatch a “hacker” and threatened him with criminal prosecution.

Post-Dispatch journalist Josh Renaud discovered an error in the state’s Department of Elementary and Secondary Education (DESE) website that exposed teachers’ Social Security numbers. The newspaper — the state’s largest by circulation — said it reported the vulnerability to DESE and held Renaud’s article until the information was removed from the state website.

In response to our request for comment, Post-Dispatch Attorney Joe Martineau pushed back on the characterization from the governor and the state’s education commissioner and said Renaud acted responsibly.

“For DESE to deflect its failures by referring to this as ‘hacking” is unfounded. Thankfully, these failures were discovered,” Martineau said. 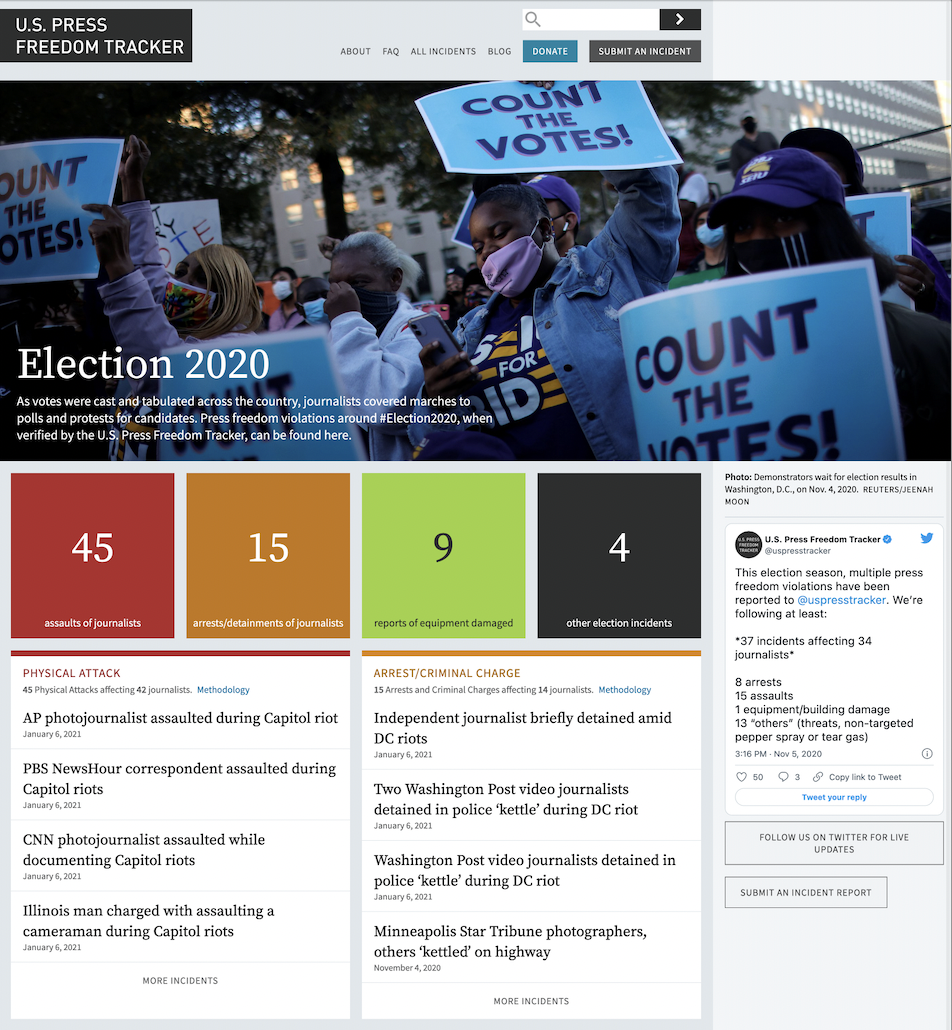 Last year, the Tracker followed contentious national and presidential elections — and press freedom violations around them — with the tag Election2020.

The tag captures everything from an Oct. 31, 2020, March to the Polls in North Carolina that ended with one journalist arrested and nearly a dozen targeted with pepper spray, to the Jan. 6, 2021, certification of electoral college votes that saw riots at the Capitol, with journalists assaulted and media equipment damaged.

We’ll be watching next week’s Election Day for any reported press freedom violations. Follow us on Twitter @uspresstracker where we’ll update in real time.

After this newsletter arrives in inboxes each month I hear back from readers. Some want to know more about an item I mentioned, looking for details or next steps. Others point out typos. And while I don’t love that there are typos, I do appreciate the attention to detail (everyone needs an editor, amiright?). You can reach me at editor(at)freedom(dot)press with your questions and style notations. And if you’re looking for how to donate, it’s here → Donate.