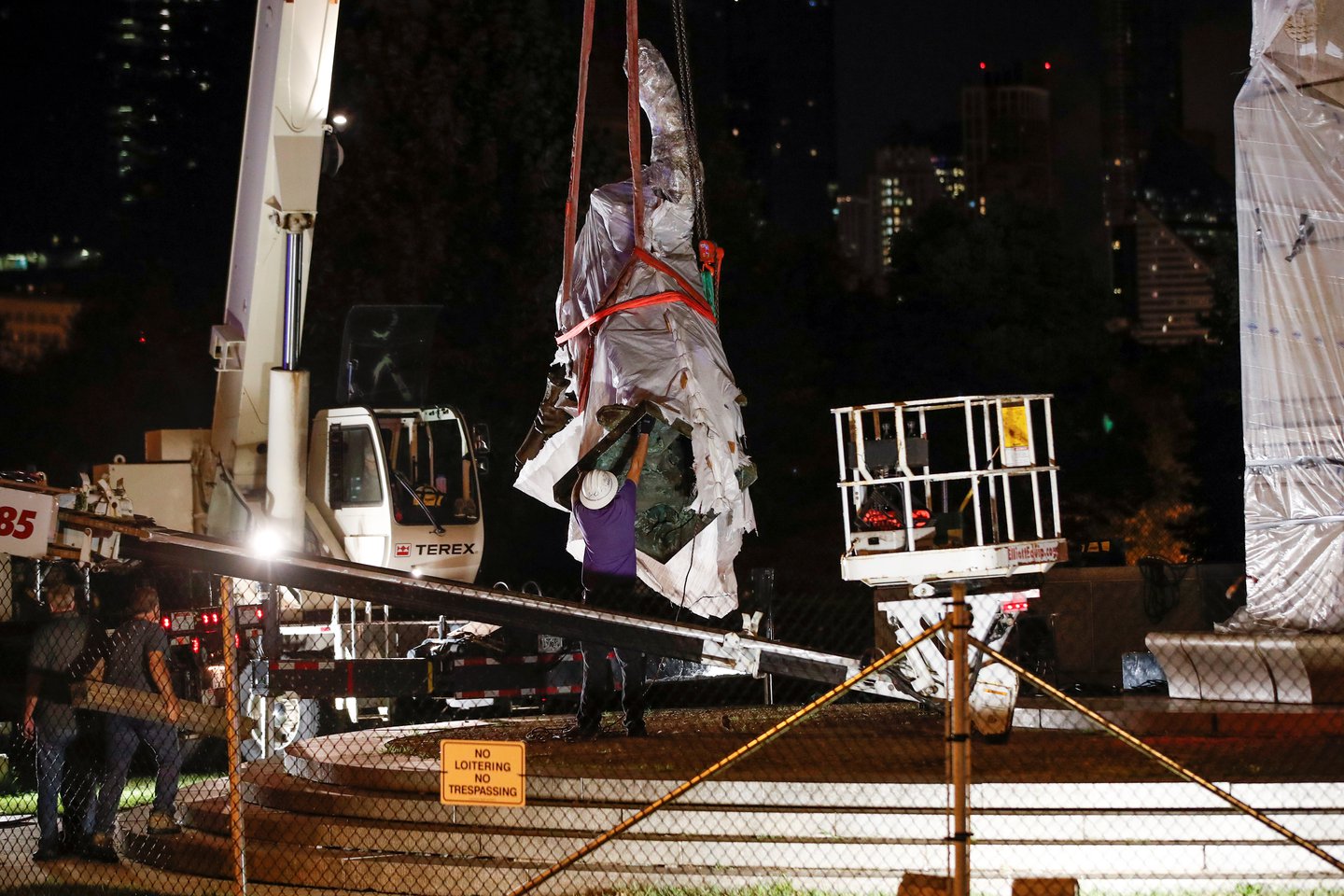 The Christopher Columbus statue in Chicago’s Grant Park was officially removed on July 24, 2020.

Colin Boyle, a photojournalist for Block Club Chicago said he was assaulted by police while covering demonstrations in Grant Park on July 17, 2020.

Boyle was documenting the scene surrounding the park’s Christopher Columbus statue, where reports estimated that at least 1,000 people had gathered, eventually attempting to topple the monument to the 15th-century explorer.

Removal of Columbus monuments around the country has been a focal point for many nationwide groups given the explorer’s history of colonization and violence toward Indigenous people.

During the demonstrations in Chicago, which included a rally in support of Black and Indigenous people, police and protesters clashed. Forty-nine officers, according to the Chicago Police Department, were injured, with 18 sent to the hospital, while demonstrators filed at least 20 complaints for excessive force and other grievances with the Civilian Office of Police Accountability.

Boyle told the U.S. Press Freedom Tracker that he’d arrived at Grant Park around 8 p.m., making his way around the area, taking pictures and following police orders. He was wearing a helmet emblazoned with the word “press” and had his police-issued press badge around his neck. About 15 minutes later, he said, police cleared out Columbus Drive, which bisects the park, and things seemed to be winding down.

He said that as he began to exit the park he encountered Officer Kerry Pozulp. Boyle said he held up his press badge, and when the officer saw it, he swore at him, chiding him for presenting his press credentials.

“I said, ‘Is there a problem? Can you repeat?’” Boyle told the Tracker. Boyle said Pozulp then grabbed him from behind and started to shove him. Boyle said he then pulled out his phone to film. When he called out for help to nearby officers, Pozulp replied, “Yeah, you’re gonna need help.”

I was just assaulted by an officer for crossing the road to my bicycle while holding up my press badge and he called me a "smart ass" for doing so, accused me of wanting to start a problem. I yelled help, he said "you're gonna need help" before throwing me. @Chicago_Police pic.twitter.com/XYuJe19IQm

He said he walked away without injury and immediately reported the incident to police nearby. “I had the worst-case scenarios running through my mind,” he said.

After Boyle tweeted the video, the CPD responded on Twitter with a statement that read, in part, “We remain committed to ensuring members of the press are able to do their jobs safely. This incident occurred when Chicago Police officers were dispersing the crowd to protect public safety and all those involved.”

Boyle filed a formal complaint with COPA. When asked for comment, Jennifer Rottner, the director of public affairs at COPA, said she had nothing additional to share, as the case is under investigation.

Boyle also filed a lawsuit against the City of Chicago and Officer Pozulp, alleging that Pozulp committed eight offenses, including use of excessive force, assault and battery. The case has since been settled and dismissed, according to Boyle’s lawyer, Matt Topic.

CBS Chicago reporter Marissa Parra was assaulted by an individual while covering demonstrations in Grant Park on July 17, 2020.Parra was documenting the scene surrounding the park’s Christopher Columbus statue, where reports estimated that at least 1,000 people had gathered following a rally for Black and Indigenous people, eventually attempting to topple the monument to the 15th-century explorer.Removal of Columbus monuments around the country has been a focal point for many nationwide groups given the explorer’s history of colonization and …