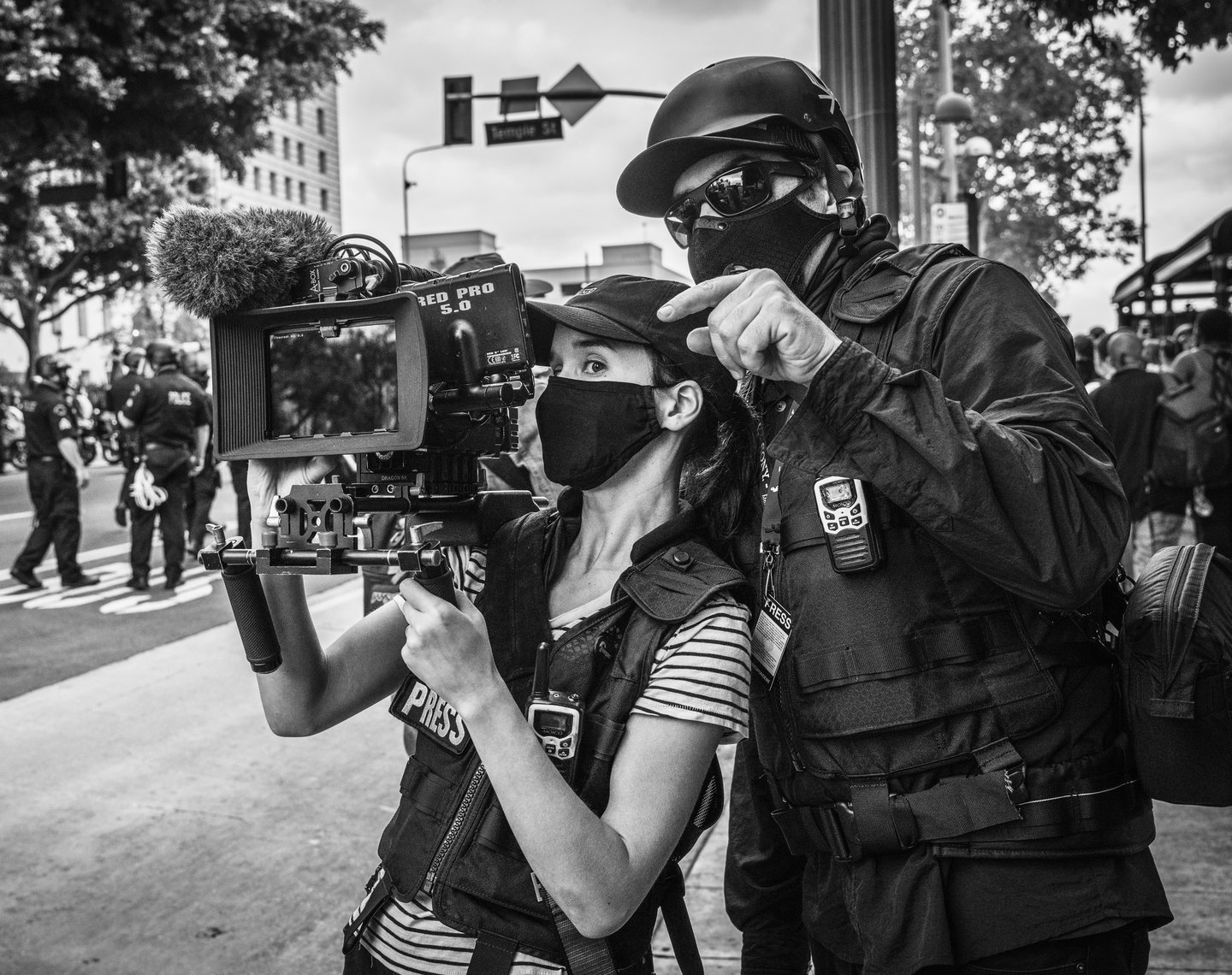 Winters Rock Entertainment documentarians, Miranda Winters, left, and Rocky Romano film at a protest in L.A. in November 2020. Romano was hit over the head with a baton while filming another protest on July 3, 2021.

Documentarian struck over the head with baton by man at L.A. demonstration

Documentary writer, director and producer Rocky Romano was struck over the head with a baton while he was documenting protests outside a spa in Los Angeles, California, on July 3, 2021.

Wi Spa, located in L.A.’s Koreatown, became a flashpoint for anti-transgender demonstrators as the result of a viral video which police are now treating as a hoax, Slate reported. Romano told the U.S. Press Freedom Tracker via email that a loose coalition of LGBTQ, antifa and leftist demonstrators had assembled outside the spa shortly before 10 a.m. in support of transgender individuals’ rights.

“We knew that there had been threats issued by far right extremists and, as always, we came prepared with our limited protective gear, which thankfully included my helmet,” Romano said. “What we did not know was the extent of the danger we would be facing.”

Shortly after the documentarians arrived, several more groups Romano described as QAnon believers, Trump supporters and religious zealots arrived at the spa. Animosity between the groups of protesters and counter-protesters escalated.

“As tensions rose, fights began to break out and I ended up being hit with a cloud of mace as I filmed,” Romano said. “As the acts of violence began to escalate even more, I began to try and de-escalate certain situations where violence could reach the point of major bodily harm or death.”

“Just as I stepped in to allow a far-right protester to get to his feet after falling to the ground after a confrontation, I was hit from behind by some sort of blunt instrument,” Romano said.

In footage captured by independent journalist Tina-Desiree Berg, an individual in a plaid shirt can be seen advancing down the street toward a crowd of scuffling protesters. Approximately 15 seconds into the clip, the individual appears to deliberately approach Romano, who is wearing a flak jacket labeled with “PRESS” and a helmet while filming, and strike him across the head with what appears to be a club.

More footage from yesterday's WiSpa anti trans demonstration. An anti trans agitator approaches a man wearing a press flack jacket from behind and hits him with a pipe on the back of his head pic.twitter.com/IRoLQYGHNu

The individual can then be seen running back down the street, and appears to taunt Romano and the crowd before turning down a side street and getting into a vehicle parked nearby.

Romano said that the individual dropped the club as he fled and that someone was able to recover it. Romano subsequently identified the weapon as a “Tire Thumper” — a hickory wood baton weighted with three inches of iron rivet embedded inside — which qualifies as a “generally prohibited weapon” under the state’s penal code.

After hitting journalist Rocky Romano in the head with this club, identified as a 'tire thumper,' the assailant dropped it while fleeing.

Following the assault, Romano told the Tracker he didn’t seek medical attention but followed best practices for someone suffering from a concussion. Later that night, Romano said, he could feel that his scalp had split slightly because of the force of the impact.

Romano said he has been in contact with the Los Angeles Police Department and is consulting with Winters Rock Entertainment’s legal counsel about the best way to move forward.

LAPD didn’t respond to an emailed request for comment.

On Sept. 14, 2021, prosecutors charged a man with assault after documentary writer, director and producer Rocky Romano was hit over the head with a baton while he was documenting protests in Los Angeles, California, in July.

During protests outside Wi Spa in LA’s Koreatown, an individual ran to Romano, who was wearing a flak jacket labeled with “PRESS” and a helmet while filming, and struck him across the head with what appears to be a club. Romano subsequently identified the weapon as a “tire thumper” — a hickory wood baton weighted with three inches of iron rivet embedded inside.

Los Angeles County prosecutors charged suspect Aaron Simmons with one count of assault with a deadly weapon other than a firearm, the Los Angeles Times reported.

Romano told the U.S. Press Freedom Tracker that a “team of dedicated journalists, gonzo media and cyber sleuths” had helped the Los Angeles Police Department Major Crimes Division identify his assailant, and he was grateful that prosecutors had pursued the assault charge.

"The frequency and amount of premeditated violence towards the press that cover protests across the nation is unacceptable,” Romano said. “[I] hope that this arrest will help curb the violence in the streets of Los Angeles. As we navigate these uncertain times I think we all need to keep in mind that without a free press, there can be no democracy."

While prosecutors also filed an arrest warrant, the Times reported that as of Sept. 20 police had not yet located Simmons. If convicted, Simmons faces up to four years in prison.

The LAPD did not respond to an email requesting comment.