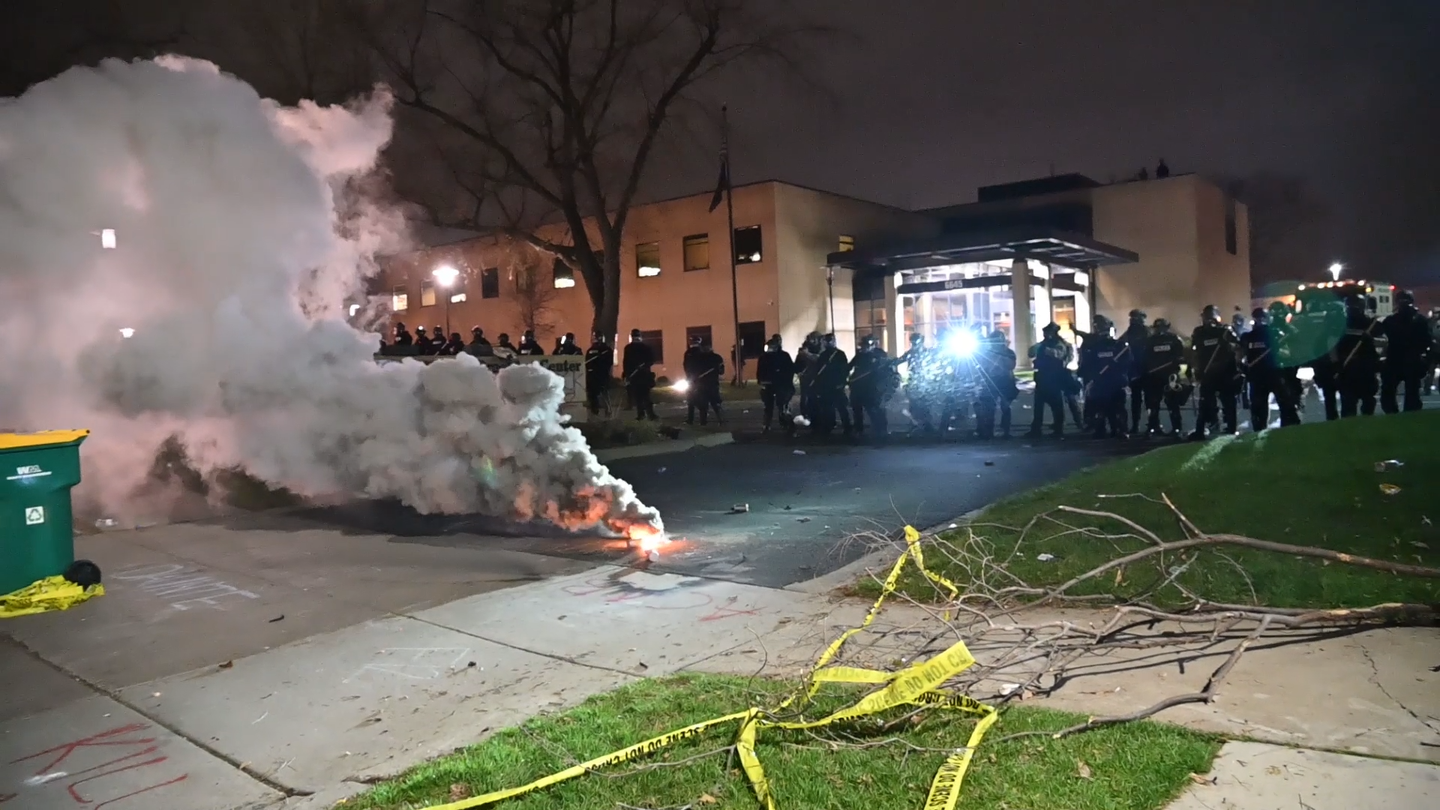 Freelance journalist Tim Speier said he was filming a smoke grenade on April 11, 2021, in Brooklyn Center, Minneapolis, moments before he was hit in the chest with a flash-bang grenade.

Freelance journalist Tim Speier was struck in the chest with a flash-bang grenade that detonated while he covered protests in Brooklyn Center, Minnesota, on April 11, 2021.

Protests outside the police department began after the fatal police shooting of 20-year-old Daunte Wright earlier that day, which occurred as a former police officer in nearby Minneapolis was on trial in the death of George Floyd. The events rekindled a nationwide wave of racial justice protests that began almost a year earlier after Floyd’s death.

Speier is a former marine who is now a student at St. Cloud State University and has written for the student publication the University Chronicle. He told the U.S. Press Freedom Tracker that he arrived to cover the protests alongside freelance journalist J.D. Duggan at approximately 9:30 p.m.

“About 30 minutes later, I was trying to get some footage of a smoke grenade going off and there were protesters throwing stuff over me and another reporter who was standing right next to me,” Speier said. “In the footage it looks like an officer lobbed a grenade and when it came down it basically popped on my chest.”

In footage Speier shared from Mercado Media, he can be seen standing at the intersection of 67th and North Humboldt Avenues at the north side of the police department, next to Unicorn Riot reporter Niko Georgiades, while a line of law enforcement officers stand in the background.

Approximately 30 seconds into the clip, a projectile which Speier identified as a flash-bang grenade can be seen striking him directly in the chest and detonating.

Last night, while covering the protest with @JDugganMN at the Brooklyn Center Police Dept., I had a flashbang grenade detonate on my chest. I didn't think it was that bad till I saw the footage from Mercado Media.
I'm ok, btw. pic.twitter.com/6SIiVvVKO0

Immediately following the impact, the journalist filming the incident approaches Speier and Georgiades to ask whether they were alright, and both appeared to indicate that they were.

“I didn’t think it was that bad till I saw the footage from Mercado Media,” Speier wrote. “I’m OK.”

Speier told the Tracker that his shoulder was a bit sore following the incident, but he was protected from the worst of the impact by the ballistic vest he was wearing. In the footage, Speier can be seen wearing a protective vest labeled “PRESS” and press credentials around his neck, in addition to a helmet and respirator mask.

Speier said he wasn’t sure whether the officer had targeted him and Georgiades, but noted that no protesters were standing near them when the grenade was thrown.

The U.S. Press Freedom Tracker documents incidents of journalists being assaulted, arrested, struck by crowd control ammunition or tear gas, or who had their equipment damaged in the course of reporting. Find all incidents related to Black Lives Matter and anti-police-brutality protests here.