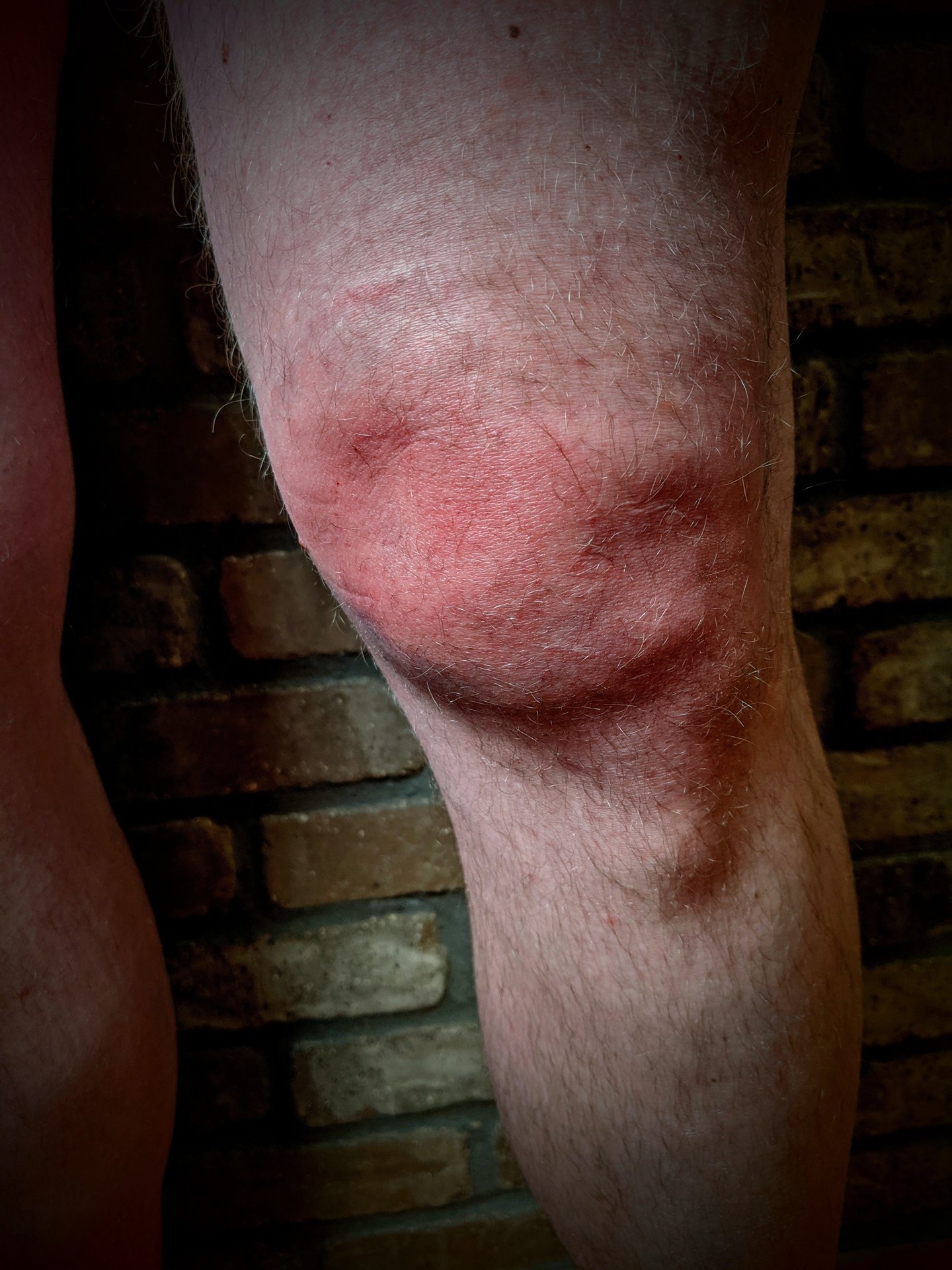 An independent photojournalist was shot multiple times with crowd-control munitions while documenting protests in Brooklyn Center, Minnesota, on April 16, 2021.

An independent photojournalist said he was repeatedly shot with crowd-control munitions and shoved by law enforcement officers while he was documenting protests in Brooklyn Center, Minnesota, on April 16, 2021.

Demonstrators had gathered in front of the Brooklyn Center Police Department to demand justice in the killing of Daunte Wright, a Black man, who was fatally shot by a white police officer on April 11. Earlier on April 16, Minnesota District Judge Wilhelmina Wright granted a motion for a temporary restraining order barring all local law enforcement agencies from arresting, threatening to arrest, using physical force against or seizing the equipment of journalists documenting the demonstrations.

The photojournalist asked only to be identified under Photojournalist Docs or “PJ” (the name under which he publishes), citing concerns about police retaliation or private individuals targeting him. PJ, whose recent photos from celebrations in Minneapolis following the Derek Chauvin verdict were published by WeekenderNJ, told the U.S. Press Freedom Tracker he arrived at the protest at around 4 p.m. and remained into the night.

Police had established a barricade consisting of two layers of fencing along the east side of the police department property, down North Humboldt Avenue, according to PJ. The photographer said officers remained behind both fences, near the department building, most of the night.

At around 9:45 p.m., PJ said, he was photographing from the north side of the fence line when a protester breached the barricades further south.

“Before I knew it, things started to change. It went from kind of just a protest to flash bangs going off and them declaring it an unlawful assembly,” PJ said.

About 10 minutes later, PJ said, he moved away from the fence line, toward apartment buildings across the street from the police department, and at least 150 feet away from the main group of protesters. He said that as he continued moving, law enforcement officers started shining lights on him.

“I put my hands up just in case I was blocking the ‘PRESS’ marking on my chest with my camera, so I put my hands up, I let my chest show, and then I would go back to taking photos,” PJ said, adding that he did this multiple times as the light continued to follow him.

PJ said he began photographing as a group of Minnesota State Patrol troopers rushed several clearly marked members of the press who were set up off to the side of the protesters. Within seconds, PJ said, he was struck first on his left buttocks and then again on the back of his left calf with marker rounds, a type of spongy crowd control munition that uses a dye to mark individuals with a bright color, often in order for law enforcement to identify them to be detained.

In footage PJ posted to YouTube, after being struck he can be heard shouting and in closed caption indicates that he was shouting “Press!” as he jogs away from where he had been standing.

“Then I took a direct hit to my left knee with a foam baton round,” PJ said. “More and more lights began to shine on me, and I worried that I would be hit with more munitions.”

4/16/21: I was first targeted & then fired upon by #MNOSN even after US District Judge issued TRO preventing their attacks on the press. Shot multiple times by less-lethal (40mm) & non-lethal (.68cal) munitions @uspresstracker @ACLUMN @GovTimWalz #BrooklynCenter #DaunteWright pic.twitter.com/nnkxvyWqsg

Throughout the footage, PJ appears to be standing and walking alone at a significant distance from the unfolding demonstrations.

“If I was really close to the protesters and was inadvertently shot trying to capture photos, that would be different,” PJ told the Tracker. “What really blows me away is that I was very isolated. There was zero reason, no logical reason for this to have happened.”

About three minutes after he was struck the first time, PJ said, his video camera battery died.

“It didn’t take long after that for law enforcement to move in and start sort of kettling people,” he said, referring to a police tactic of surrounding protesters. “A state trooper or a sheriff, I’m not really sure who, rushed up to me and kind of grabbed me by the arm and started pushing me in a direction, saying, ‘You gotta go, you gotta leave.’

“Again, I was kind of isolated, I wasn’t around anyone, I wasn’t interfering or impeding anyone from doing their jobs,” PJ added.

PJ said the law enforcement officer then pushed him in the direction of a parking lot and ordered him to leave; judging from his experiences at earlier protests, PJ said, he believed that if he didn’t comply he would have been arrested. In order to leave the area, PJ said he had to climb over a couple of six- or seven-foot-tall fences. He said he also had to leave behind a step stool he had been carrying with him.

Neither the Brooklyn Center Police Department, the Hennepin County Sheriff’s Department nor the Minnesota State Patrol responded to requests for comment as of press time.

Independent photojournalist Jon Farina was shoved by a law enforcement officer while covering a protest in Brooklyn Center, Minnesota, for the online outlet Status Coup on April 16, 2021.Demonstrations were held several days in a row outside the Brooklyn Center Police Department in response to the fatal police shooting of Daunte Wright, a 20-year-old Black man, during a traffic stop on April 11. Wright’s death occurred as a former police officer in nearby Minneapolis was on trial in the death …

Freelance journalist J.D. Duggan said he was detained and shoved to the ground by a law enforcement officer while reporting on a protest in Brooklyn Center, Minnesota, on April 16, 2021.Several hundred protesters had marched to the Brooklyn Center Police Department in response to the fatal shooting of 20-year-old Daunte Wright, a Black man, by a white police officer during a traffic stop. Wright’s death, on April 11, occurred as a former police officer in nearby Minneapolis was on trial …
More related incidents