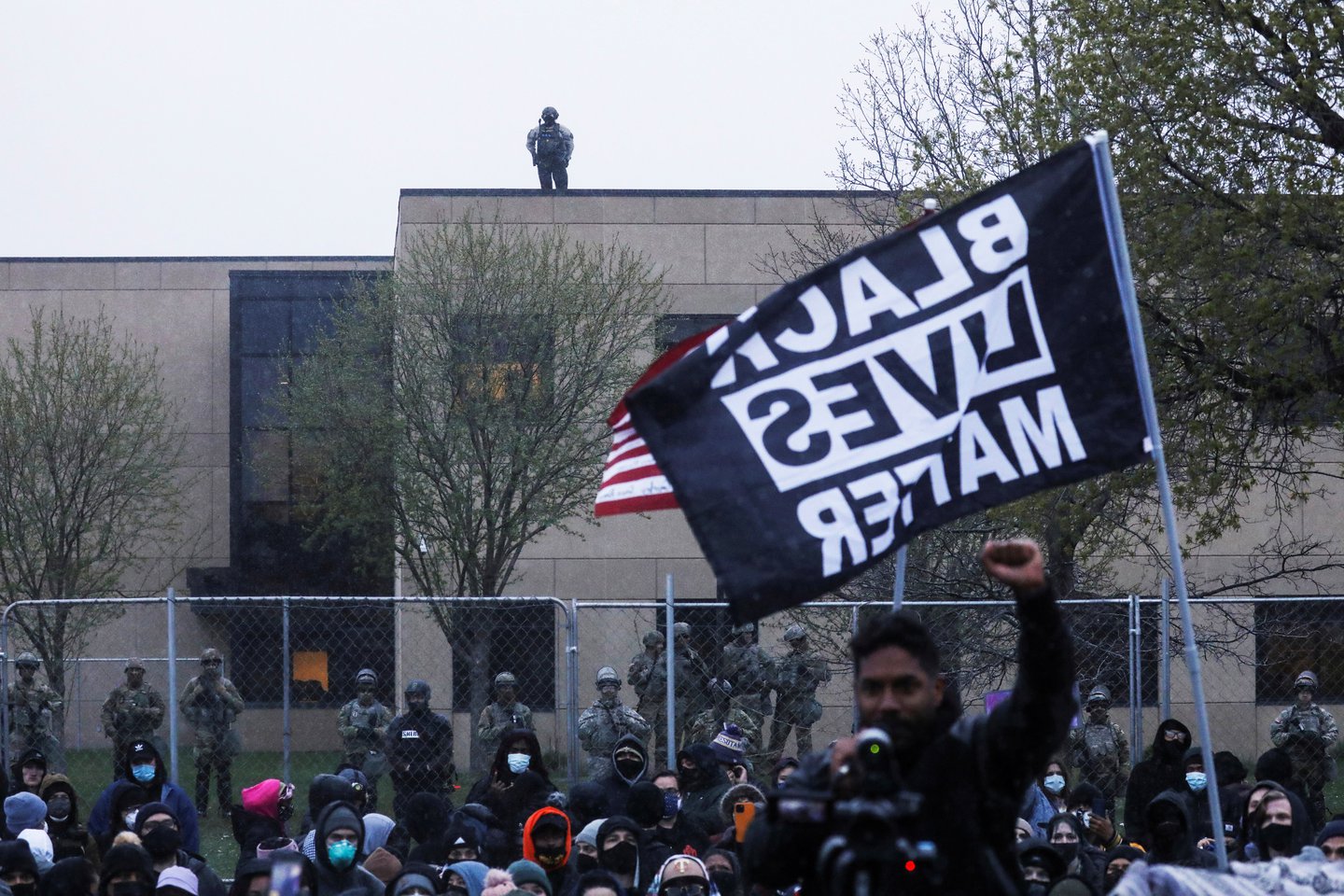 Protesters rally outside the Brooklyn Center Police Department in Minnesota, as it is guarded by law enforcement and the National Guard, on April 13, 2021, days after Daunte Wright was shot and killed by a police officer.

Minneapolis Star Tribune reporter Andy Mannix was hit in the foot with a less-lethal munition while covering protests in Brooklyn Center, Minnesota, on the evening of April 13, 2021, the journalist told the Committee to Protect Journalists in a phone conversation. The munition bounced off his boot, Mannix said.

Toward the end, patrol was firing a lot of projectiles. One bounced off the bottom of my boot as I was walking away.

According to the Star Tribune, between 800 and 1,000 protesters had gathered that night outside an FBI field office building, which was guarded by law enforcement that included Brooklyn Center police and the National Guard, to demand justice in the killing of Daunte Wright. Wright, a Black man, was fatally shot in the chest by a white Brooklyn Center Police Department officer on April 11.

Brooklyn Center, which is near Minneapolis, Minneapolis and St. Paul were under a 10 p.m. curfew; journalists were exempt, according to news reports.

At approximately 8:30 p.m. on the 13th, the Minnesota State Patrol declared an unlawful assembly outside of the FBI field office building and soon began using less-lethal weapons on the crowd, the Star Tribune reported.

Mannix said that around this time, a flash-bang grenade was fired and people from the crowd rushed up to the fence surrounding the building, escalating the situation.

“It was kind of on after that,” said Mannix. “[Law enforcement] started firing a ton of flash-bangs,” he said, noting that it was hard to tell in the moment if the munitions were tear gas, pepper-spray bombs or smoke bombs.

Mannix said that around 9 p.m., the state patrol added more officers to the scene and they were firing mortar grenades. Several minutes later, he said, law enforcement fired projectiles and one ricocheted off his foot.

“We’ve seen this a lot in the past year. It doesn’t seem like they’re aiming at anyone in particular, or if they are they’re not aiming at anyone very well because you can just hear [the munitions] buzzing by your ear, or bouncing off a stop sign,” Mannix told CPJ. CPJ is a founding partner of the U.S. Press Freedom Tracker.

Protests in response to police violence and in support of the Black Lives Matter movement began in Minneapolis last summer following the May 25, 2020, death of George Floyd, a Black man. Former Minneapolis police officer, Derek Chauvin, who is white, is currently on trial in the city for Floyd’s death. The U.S. Press Freedom Tracker is documenting assaults, arrests and other incidents involving journalists covering protests across the country.

Mannix told CPJ that he and his colleague, Star Tribune photographer Carlos Gonzalez, left the area shortly after Mannix was hit with the projectile.