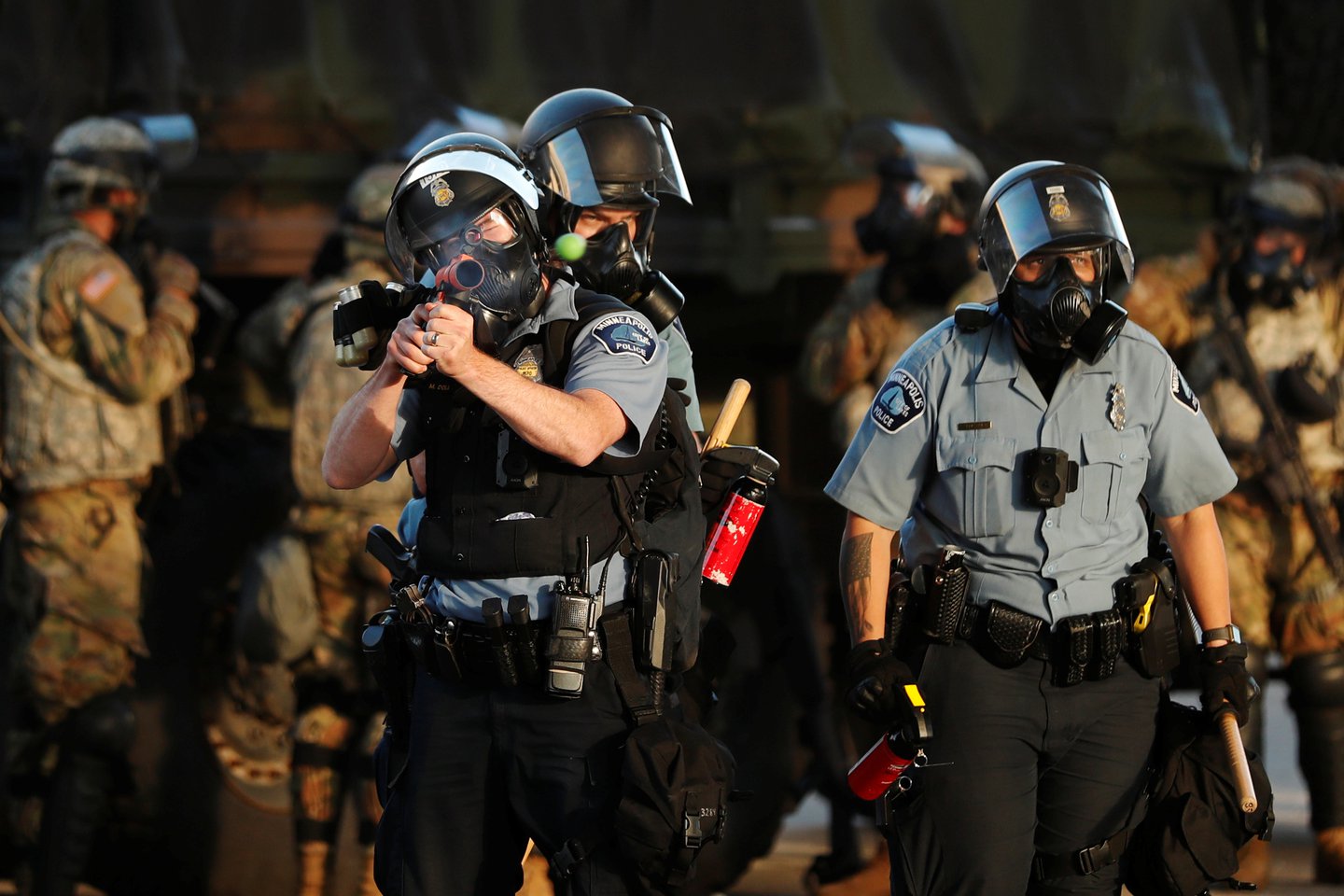 A Minneapolis Police Department officer fires a less-lethal round during continued demonstrations on May 29, 2020, in Minneapolis, Minnesota.

Freelance writer and photographer Linda Tirado was struck with multiple crowd-control munitions while covering the fourth night of protests in Minneapolis, Minnesota, on May 29, 2020.

Protests in Minneapolis and across the nation were sparked by a video showing a police officer kneeling on the neck of George Floyd, a black man, during an arrest on May 25. Floyd was later pronounced dead at a hospital.

Tirado told the U.S. Press Freedom Tracker she was reporting near the Third Precinct around midnight on the 29th when she was struck by a tracker round, judging from the green residue on her backpack.

A second round that she believes was a rubber bullet then struck the side of her head and her left eye.

“I got hit. My goggles broke, and I felt the blood and there was gas so I just closed my eyes, held up my hands and started yelling, ‘I’m press, I’m press!’” Tirado said.

Tirado said that a group of protestors took her to a nearby van and transported her to the hospital.

Hey folks, took a tracer found to the face (I think, given my backpack) and am headed into surgery to see if we can save my left eye

Tirado later tweeted that she is permanently blind in her left eye.

The Minneapolis Police Department did not respond to an email requesting comment.

Freelance photojournalist Linda Tirado filed a lawsuit alleging excessive use of force and violations of her First Amendment rights after police struck her with a rubber bullet, permanently blinding her in one eye.

On May 29, Tirado was struck first with a tracking round and then multiple foam bullets while documenting the fourth night of protests spurred by the death of George Floyd in police custody. According to the complaint, at least one struck her in the face, shattering her goggles and injuring her eye.

While Tirado called out that she was a member press and closed her eyes against the blood and tear gas, no law enforcement officers attempted to help her, the complaint says.

It also alleges that police may have been deliberately targeting members of the press, citing other journalists injured while covering the protests and a letter disparaging the press sent to officers by police union president Kroll.

Tirado told Courthouse News that the purpose of her suit was not only to gain compensation for her injury, but also to raise awareness and reinforce that the press should not fear police retaliation.

“My goal here is to ensure that this does not continue to happen, to bring attention to the fact that this has happened a lot around the country, that this happened in Minneapolis, and that it’s really not fair,” she said.

Tirado said in an interview on Welcome to Hell World that she is uninsured and is already facing $58,000 in medical bills resulting from her injury.