Minneapolis Star Tribune photojournalist Mark Vancleave said he was threatened and his camera drone was stolen May 25, 2021, as he covered demonstrations in Minneapolis, Minnesota, marking the first anniversary of the police killing of George Floyd.

The death of Floyd, a Black man, sparked months of demonstrations across the country demanding justice and reform of police departments. On April 20, a jury found former Minneapolis police officer Derek Chauvin guilty of second and third degree murder and second degree manslaughter in Floyd’s death.

Vancleave told the U.S. Press Freedom Tracker that shortly after 7 a.m. on the 25th he arrived at East 38th Street and Chicago Avenue, the intersection where Floyd was killed and which has been turned into a memorial site, to capture some aerial footage ahead of planned demonstrations in the afternoon.

“I flew [the drone] around for maybe 10 minutes or so,” Vancleave said, noting that very few people were in the area at that point. Then, said Vancleave, he returned to where his car was parked, about half a block away, so that he could land the drone and change its batteries and camera lens.

Immediately after he landed the drone, Vancleave said, a man approached him and began asking about the drone.

“Two other dudes walked up behind him and immediately got in my face, saying ‘Who are you? What are you doing here?’” Vancleave said. “They started demanding that I show them the video that I had taken.”

Vancleave said they also asked him to show his press credentials and driver’s license.

“They said they were ‘security.’ And then the first guy who came over just grabbed my drone and started walking away,” Vancleave said.

Had my drone taken by three dudes working “security” about a block from 38th and Chicago this morning. Was threatened and told never to come back to George Floyd Square.

Ultimately, Vancleave said, the men took his DJI Inspire 2 drone, threatened him and told him never to return to the area, which has been dubbed George Floyd Square. Vancleave estimated that the equipment, which belongs to the Star Tribune, is valued at approximately $5,000.

“One of the reasons I was there so early is I wanted to be as unobtrusive as possible. As a Minneapolis resident I understand how annoying flying things can be over residential areas, I experienced it over the past year,” Vancleave said. “This was not me being belligerent, ignoring community members. This was guys running up, taking my drone, threatening me and running off.”

Vancleave was struck in the hand with a rubber bullet in nearby Brooklyn Center on April 12, where demonstrators had gathered to demand justice in the killing of Daunte Wright, a Black man, who was fatally shot by a white police officer. Because of the resulting injury to his hand, Vancleave tweeted that using the drone was his only means of covering the demonstrations.

It’s very frustrating. I still can’t bend my finger well enough to grip a camera, so this was my way of making pictures.

The U.S. Press Freedom Tracker documents incidents of journalists being assaulted, arrested, struck by crowd-control ammunition or tear gas, or who had their equipment damaged in the course of reporting. Find all incidents related to Black Lives Matter and anti-police-brutality protests here.

A vehicle used by FOX 9, the Minneapolis-St. Paul Fox affiliate, was hit with two rubber bullets, which cracked its windshield, on May 30, 2020, in Minneapolis, according to tweets from two network reporters, Dawn Mitchell and Amy Hockert.The incident occurred as the crew was reporting about ongoing protests in Minneapolis relating to the May 25 death of George Floyd, a Black man, in Minneapolis police custody.Hockert tweeted around 9:30 p.m. that two rubber bullets hit the car and that … 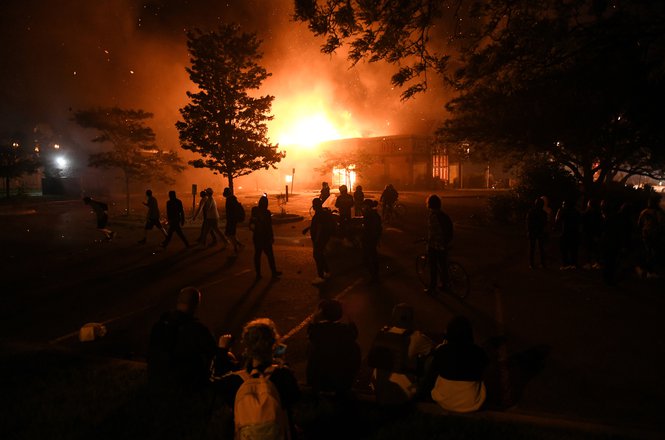 Richard Tsong-Taatarii, a photographer for the Minneapolis Star-Tribune, was taking photos of looters inside an Arby’s fast food restaurant when …

Freelance photojournalist Joshua Rashaad McFadden, on assignment for The New York Times, said he was detained and hit by law enforcement officers while covering a protest in Brooklyn Center, Minnesota on April 16, 2021.The fatal police shooting of 20-year-old Daunte Wright in Brooklyn Center on April 11 rekindled a wave of racial-justice protests that began almost a year earlier. Wright’s death occurred as a former police officer in nearby Minneapolis was on trial in the death of George Floyd. Protests …
More related incidents