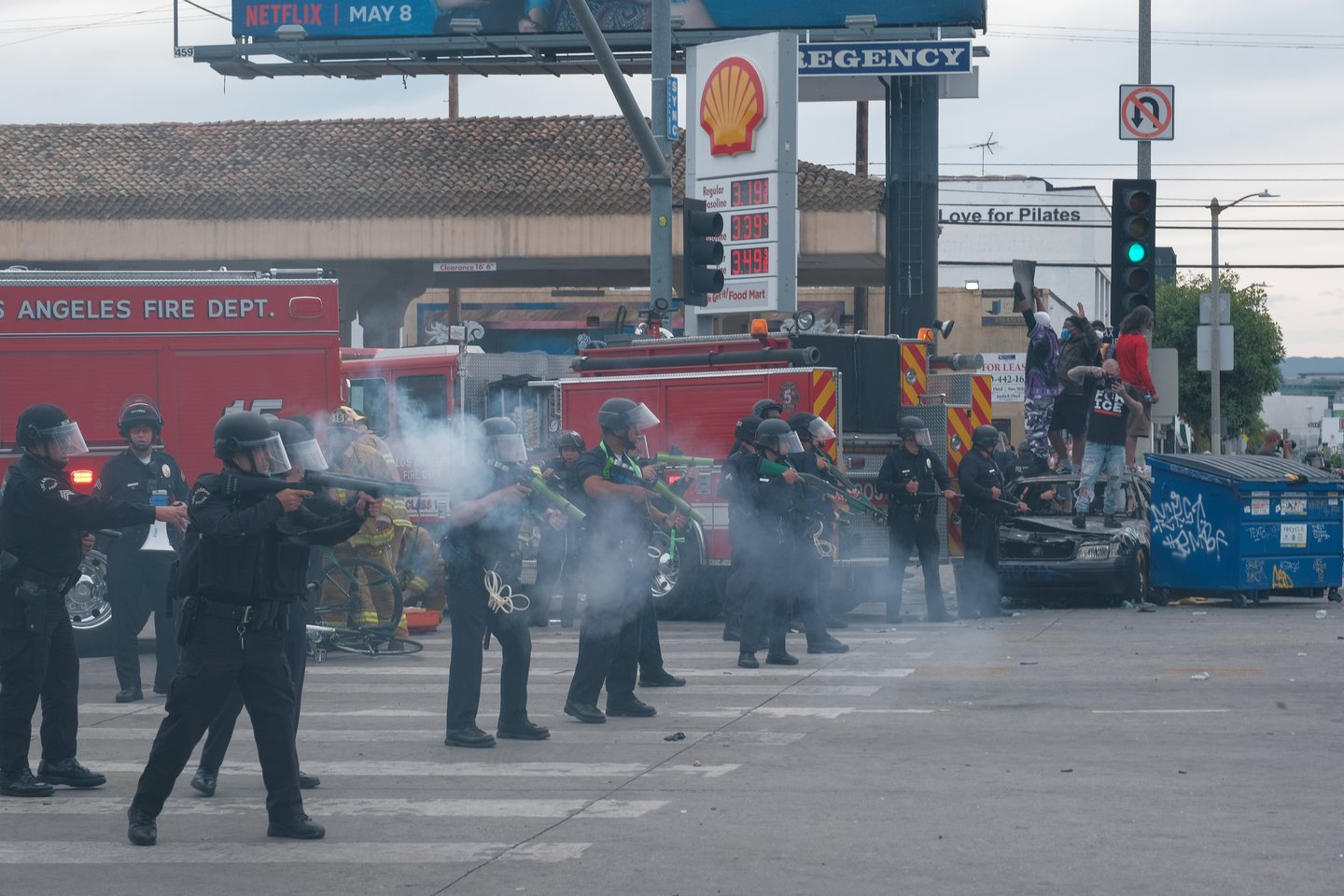 Journalist shoved with a police baton while covering LA demonstrations

Journalist Chava Sanchez was pushed and tear gassed by law enforcement while covering protests in Los Angeles on May 30, 2020, he told the U.S. Press Freedom Tracker. Sanchez is a visual journalist with KPCC/LAist, a Southern California-based public media network.

The protests in Los Angeles were sparked by a video showing a white police officer kneeling on the neck of George Floyd, a Black man, during an arrest in Minneapolis, Minnesota, on May 25. Floyd was pronounced dead at a local hospital. Demonstrations against police brutality and in support of the Black Lives Matter movement have been held across the United States since the end of May.

Sanchez told the Tracker he arrived at Pan Pacific Park at around 1 p.m. to document a Black Lives Matter protest. A couple thousand people had congregated at the park, he said. Protesters then marched through the city’s Fairfax District.

Sanchez said he first encountered law enforcement, who represented the Los Angeles Police and Los Angeles County Sheriff’s departments, between 3 and 5 p.m. A police vehicle had been lit on fire near the intersection of Fairfax Avenue and Third Street. Law enforcement formed a line to prevent protesters from moving west, creating a tense stand-off, Sanchez said.

Sanchez, who was wearing his press badge, wanted to cross the police line to document what the protests looked like from the other side. But when he approached the line to cross, a Los Angeles Police officer wearing dark blue or black riot gear shoved him back with a baton, Sanchez said.

“I said multiple times, ‘I’m press,’ and after I ID’d as press, they did relax a bit, but they did not allow me to cross their line,” Sanchez told the Tracker.

His second encounter with law enforcement came around 5:30 or 6 p.m., he said. By then, the police had closed down streets to move protesters toward La Brea Avenue, east of Fairfax. Sanchez had decided to go home, but he noticed another stand-off between law enforcement and protesters near Beverly Boulevard and Stanley Avenue. He stopped to take photos of the confrontation.

After bottles were thrown at law enforcement, the police fired tear gas canisters to disperse the crowd. Sanchez said city police officers and county sheriffs were present when the tear gas was shot.

“You hear pops, then you see canisters, and you see a cloud of smoke,” Sanchez said. “At that point I couldn’t see anymore. It went full on to my face.”

Protesters assisted Sanchez by pouring milk in his eyes, which provides some temporary relief from the burning feeling caused by exposure to tear gas. Sanchez, who goes by his nickname, Chava, rather than Jose Salvador, tweeted his appreciation to protesters for their help.

So thankful for all the folks who helped me after the police started shooting tear gas into the protest. pic.twitter.com/bkamzDom52